Never use your employer’s printing office for your own writings

The Treaty of Amiens which ended the war between Britain, France, The Batavian Republic and Spain, prompted the Dutch to attempt to reclaim, amongst others, the Cape Colony in Southern Africa.

A former possession of the Dutch East India Company,  it had been taken by the British in 1795. The government of the Batavian Republic sent Commissioner General J. A. de Mist as head of a  new administration to rule the Cape according to the principles of the French revolution: Liberty, Equality and Fraternity!

One of the officials was a young nobleman from Ommen in the province of Overijssel  Andries van Pallandt van Eerde, whose father had lost his privileges in the new Batavian Republic. 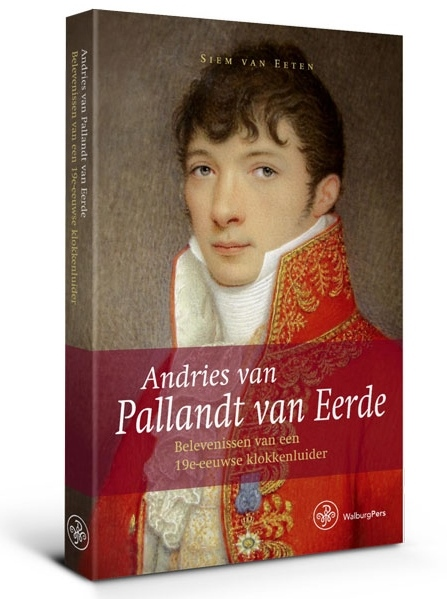 Upon arrival in the Cape, Andries was appointed private secretary to the Governor. He started his work full of enthusiasm, quickly establishing good relations with the English, among them probably John Barrow, the author of Travels into the Interior of South Africa. Barrow had a Dutch wife. 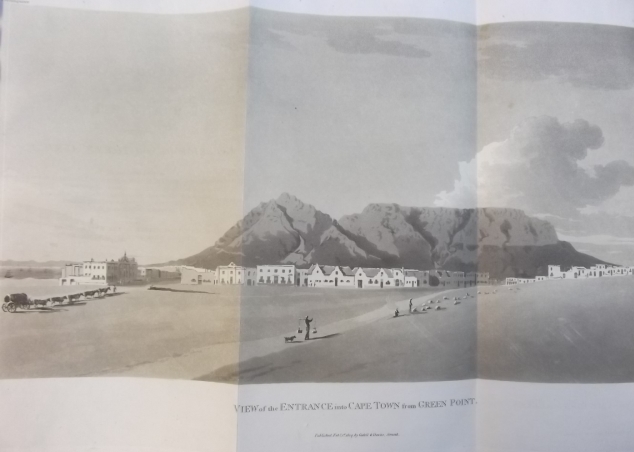 Andries soon realized that the reality on the ground differed from the ideas of the Dutch policy makers and concluded that the Colony would never be self-supporting. What’s more, it would be extremely difficult to defend the Cape against the British enemy with the small number of Dutch troops, without support from indigenous people. However, the Dutch colonists, the Afrikaners, had treated the local tribes so badly, that they were considered more likely to support the English who treated them far better.

Van Pallandt found it impossible to discuss his ideas with his superiors, so in 1803 he wrote a pamphlet, entitled Remarques générales sur le Cap de Bonne Espérance (English translation General remarks on the Cape of Good Hope; Cape Town, 1917;  09061.ff.55; picture below)  He had the pamphlet printed in the Government’s printing-office at his own expense, to be sent to the Netherlands in order to trigger a debate. 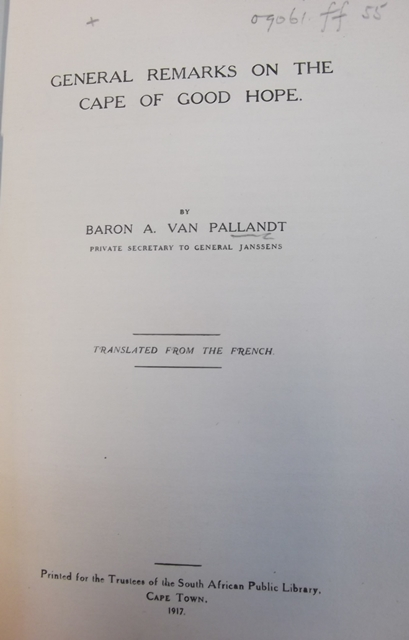 When De Mist found out about the pamphlet he was furious. He ordered an investigation by the Attorney General, Beelaerts van Blokland. To avoid a public shaming, which would mean the end of his career, Van Pallandt signed a confession and was found guilty of using the Government’s printing office without permission. All printed copies of the pamphlet were confiscated, apart from the three he had already sent to important people in the Republic.

Disappointed, Van Pallandt returned home. In the meantime, war had resumed between Britain and the Batavian Republic and on 1 January 1804 his ship was taken by a Guernsey privateer.  Andries was held captive on Guernsey for several months. There he wrote a journal about his adventures, which has now been translated from French into Dutch  as  Andries van Pallandt van Eerde, belevenissen van een 19e-eeuwse klokkenluider; a launch event for the book was held in the Castle of Eerde (Netherlands), the former home of the Van Pallandt family, on 29 April 2015, and the book is available for  consultation in the British Library.

A. van Pallandt’s diary of his time on Guernsey:  Free online resource