An Interview with photographer and stamp artist, Casey Moore

Casey Moore, a London based photographer and artist, shares his passion for stamps and photography with us. He has been exploring the British Library Philatelic collections for his work.

You can watch his film below:

The Stamp Project - Casey Moore from Slipstream Media on Vimeo.

Can you tell me a little bit about what you do?

I am a photographer using primarily large format film cameras and a specially built darkroom to produce big hand made prints. Recently my work has concentrated on inflating small objects to a pictorial scale, bringing to life and celebrating details that are often overlooked.

What is the story behind your stamps project?

My great grandfather was a philatelist, buying and selling stamps for a living in New Zealand. He wrote many books on stamps and also designed the iconic Kiwi stamp from 1935. His collection is kept and added to by my mother so I have access to this incredible catalogue. I use the large-format film camera and hard lighting to show off the craftsmanship in the etching. There is so much cultural and historical information in these stamps and the large printing in the darkroom (up to 5 ft wide) really brings them to life. Photographing tiny items and blowing them up to such a huge scale must have its technical challenges.  Can you tell me about the process?

There are a number of difficulties which stem from wanting to put something onto film which is smaller than the piece of film itself. These include light fall-off from the long bellows required for magnification, to reciprocity failure - where the film takes inordinately long to record the image and also diffraction which makes the image look soft and fuzzy. I have customised my methods to try and balance out these problems but they all remain to some degree. Then the darkroom has been built to be able to make the most of my 3m high enlarger. My cousin and I built five troughs which take 25 litres of chemicals each and a 2.5m x 1.5m sink as the prints require washing in running water for a minimum of 1hr. Producing the 5 ft prints by hand is great fun but is also difficult with a high ratio of failures as the prints are easily damaged during processing - all of which makes producing them very expensive!

How did you come across the British Library’s collections and how have they helped you?

A good artist friend Adam Bray told me about the Philatelic collection at the British Library. After making contact with one of the curators, Paul Skinner, and showing him my prints I have had a number of conversations about the themes I am exploring with the stamps and obviously he knows so much more so he can tell me if I have missed something. He and and the Head of the Philatelic Collection David Beech also really helped with my methods for photographing the stamps. I had been worried that my mounting and lighting methods might have detrimental long-term effects on the stamps and with their help I've come up with a new way of doing it which I'm much happier with. They also gave me a bag of stamp hinges which are no longer in production and are much better than modern hinges - where else could this have happened! 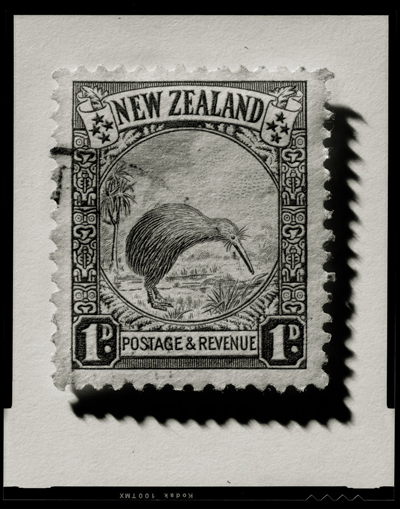 Do you have a favourite stamp?

My great grandfather Raymond JG Collins designed the kiwi stamp for the 2nd pictorial edition in New Zealand. It is such a beautiful and well known image in New Zealand and making my big prints of this image makes me really proud.

Stamps seem to be being used increasingly for creative purposes, any thoughts?

Stamps are such lovely objects and are produced for a really noble intention so I don't think they will ever go out of fashion but it's fair to say that the old ones made using intaglio printing (which stopped around the 60's) have a quality that modern ones simply can't match. The way intaglio printing impressed the ink upon the stamp gave them a 3rd dimension plus the original engraving was made by hand so they are so interesting and beautiful to photograph and enlarge. There is a famous quote by Hundertwasser which really sums up how and why stamps are special and why I only photograph stamps that have actually been sent rather than ones which were quickly put away in an album and remain in 'mint' condition: -

"This tiny, rectangular piece of paper links the hearts of the sender and receiver. It is a bridge between peoples and nations. The stamp knows no borders. It reaches us even in prisons, asylums, and hospitals, and wherever we may be on earth. Stamps should be ambassadors of art and life and not simply soulless proofs of postage paid. The stamp must experience its destiny. The stamp must once again fulfil its purpose, which means it must serve on letters. A true stamp must feel the tongue of the sender moistening its gum. A stamp must be stuck on a letter. A stamp must experience the dark depths of the post box. A stamp must suffer franking. A stamp must sense the hand of the postman handing the letter to the addressee....The stamp is the only work of art that everyone can own, young and old, rich and poor, healthy and sick, educated and ignorant, free or robbed of freedom..."

Posted by Creative Industries at 4:36 PM