Written by our guest blogger Geraldine Wharry, known for her Future Trend consultancy based in London and inspiration sharing platform Trend Atelier, with clients ranging from WGSN to Samsung. We asked her to research the influence of gothic on fashion, to tie in with our current exhibition: Terror and Wonder, the Gothic Imagination. You can see more Gothic articles here and also on the Library's Gothic Pinterest board. This is what Geraldine told us.

The Goth subculture and style permutations associated with it have continuously held their place in fashion since the seventies. Weaving in and out of different influences, it’s a difficult group to pin down to one defined aesthetic but what has remained consistent is the Goth’s love for the undead and all things dark and macabre, with different offshoots ranging from Steam Punk to Japanese street style. It’s a fashion medley embracing Victorian influences just as much as Science Fiction and at times pink hair, making it a very rich subject to follow as a trend forecaster. The most evident glue between High fashion and the Goth subculture is the theatrical drama essential to its backdrop.

More recently, Goth fashion has entered the realm of street wear and hip-hop culture with designers such as Rick Owens, Alexander Wang and Hood By Air leading the way. Paris-based American designer Rick Owens, the most pivotal to this latest interpretation of Goth style, has his own cult following which includes rapper A$ap Rocky. With coveted sneaker namesake designs and signature long line tees, it wasn’t long before the Rick Owens look made a great impact on the entire hip hop world. By early 2013, the term Street Goth made it big on the fashion scene and was adopted by the likes of Kanye West, Drake and Jay-Z. 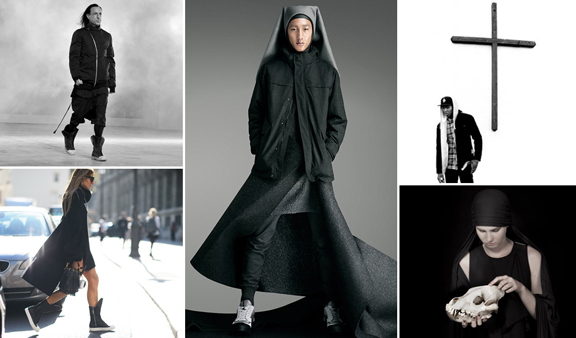 What is interesting about Rick Owens’s influence on street wear is the paradox. Whilst dark and macabre, his collections have an introspective and monastic quality, a far cry from hip-hop’s usual bling and swagger. Owens is most famous for his cloak shapes inspired by the monk’s “habit” which he reworks into sculptural creations, layered and wrapped silhouettes which can evoke Frankenstein’s bride’s dress. His cultural references are far more complex, but some interesting links are worth highlighting such as the makeup used in his Spring Summer 2015 collection, reminiscent of Japanese Butoh dancers, known as “the dance of darkness”. Rick Owens has been able to combine such references with street culture, making a big statement with American dance crew “Step with Momentum” who modeled his Spring Summer 2014 collection whilst crumping and stomping. The link with music and self-expression is prevalent in Street Goth style with one group standing out - which could also be compared to Frankenstein and his bride– Die Antwoord the South African counterculture rave group often connected with designer Alexander Wang. 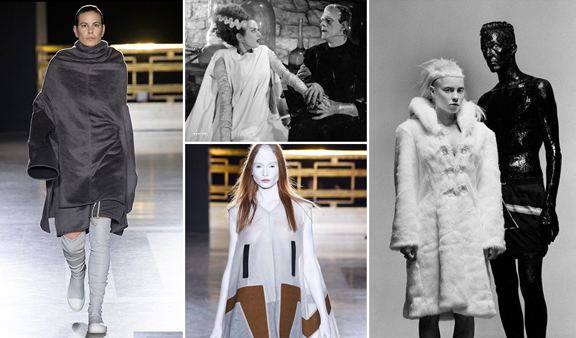 More recent fashion labels are emerging out of New York’s scene such as Hood By Air’s, designed by Shayne Oliver who brings an anarchist and warrior quality to his collections inspired by a fallen hero, civil protest and street warfare. In line with HBA and Alexander Wang in New York, Nasir Mazhar in London, street wear labels are replacing dominant logos with messages around death, oblivion and anger - all within a black and white palette. 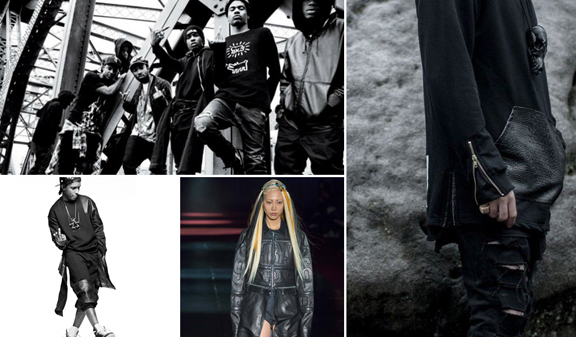 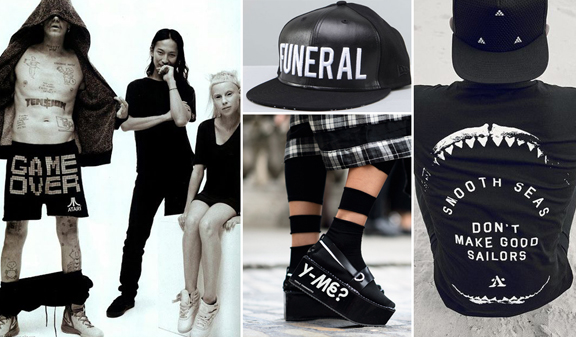 There is a Ninja fighter quality to street Goth style, one we could also link to Samurai armours because of the silhouette. One of the key aspects to the Street Goth “uniform” is multiple layering and skirt length tees, shorts or skirts worn over skinny pants, in line with Rick Owens’s cloak like proportions mentioned earlier. Mixing surfaces, juxtaposing matte and shine with leather, jersey – even sheer fabrications – gives the monochromatic look more textural dimension. Interestingly this trend, originally led by menswear is now being picked up in Womenswear as seen in Yamamoto’s recent Adidas Y3 Spring Summer 2015 collection. Street Goth taps into youth culture, the pull between good and evil and expressing discontent, with underlying themes of urban warfare. We can also link the use of leather and elongated silhouettes with motorcycle clothing as well as cult movie character Blade, a half vampire-half mortal fighting evil. 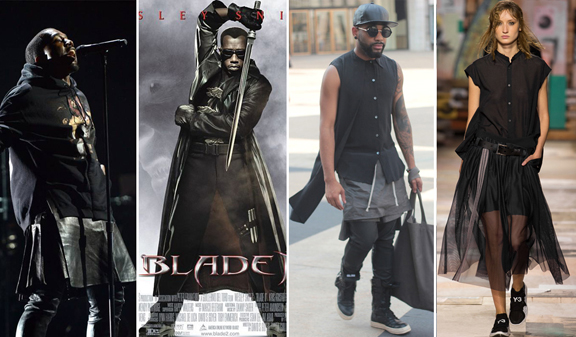 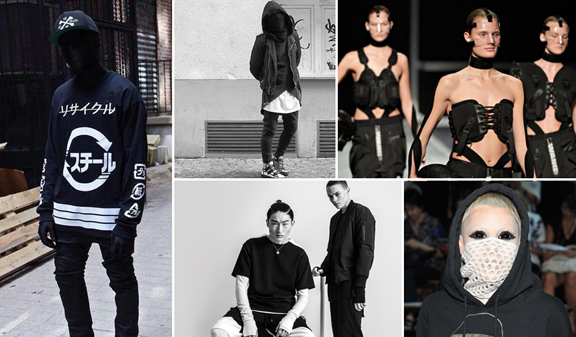 There has always been an intimate relationship between athletic clothing and street wear, therefore it wasn’t long and somewhat of a natural progression for Street Goth to influence the sports and health industry. In itself this could be seen as ironic as we don’t usually associate Goths with a healthy glow. Could the Health Goth movement be about toning your body in the most emotional, melancholic way possible? This is not the case according to Health Goth Facebook page creators Mike Grabarek and Jeremy Scott (the latter not to be confused with the fashion designer). Health Goth combines subcultural including Goth and cyber punk with the mainstream world of sport, bringing Goth fashion into a whole new context, tying itself to “Accelerationist aesthetics” a movement which looks at how subcultures can develop in our capitalist society, whilst subverting its visual codes – in this case Nike and Adidas.

One of the attendees at our recent talk “The New Black: from subculture to high culture“ at the British Library pointed out that Health Goth also originated from the need to sustain a lifestyle of clubbing and nocturnal habits. The fact is the media is jumping on the new term “Health Goth”, emboldened by the trend for dark monochromatic athletic gear and irony of comparing macabre aesthetics with Yoga clothing. Only time will tell how this trend will evolve as we see Goth fashion continue to navigate seamlessly from one style category to another. 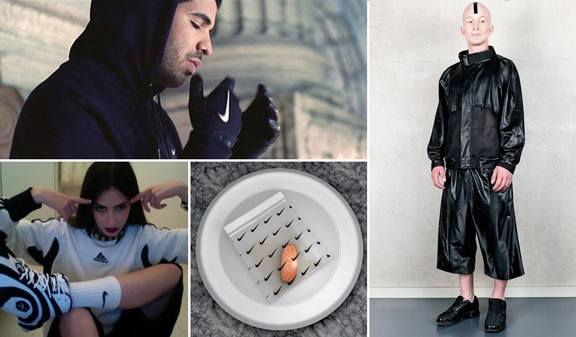 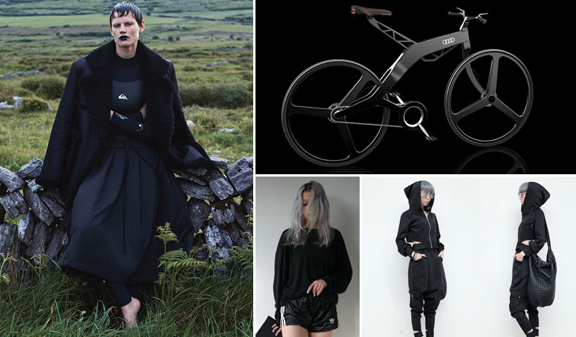 Posted by Creative Industries at 11:22 AM