Falmouth gets the octopus treatment

The British Library’s Cartographic Department has added another couple of octopus maps to its collection, and it is doubtful the Octopus Appreciation Society will be any more pleased with them than any of the others.

It is the unlucky fate of this queasy cephalopod (thanks Wikipedia) to assume a form which encapsulates perfectly all the greedy, amorphous, appropriating, hoardy traits of mankind. First used in Fred Rose’s 1870s Serio-Comic map of Europe to emphasise the multifarious designs of Russia, the octopus became a very popular device in political illustration the world over, representing nations (Russia, Japan, Britain) ther leaders (Churchill), their money (the dollar), and how they got it (property rents, below, from around 1925). 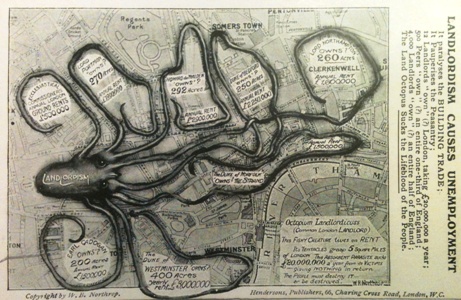 And let's not forget Falmouth, that greedy conniving Cornish town, jealously eyeing up the port and surrounding area with their rateable population and exploitable acreage of land. 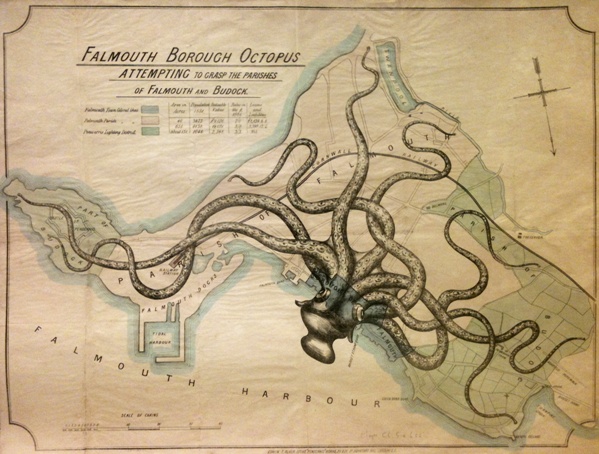 The reason for this particular bust-up is probably the Municipal Corporations Act of 1882, government legislation which gave town (borough) councils like Falmouth extra powers over surrounding areas, and provided government grants to buy up land. Within sight of Falmouth were the docks, levies from cargo, a piece of the developing tourist trade, according to those on the opposite side, anything it could get its tentacles around.

Printed in London by Thomas Olver (c. 1882) the map gives us a great insight into tensions between town and country during the late 19th century. The relentless urban expansion is not often seen from the point of view of the rural outskirts, nor the effects of this expansion and legislation upon the dynamic of smaller urban centres and their surroundings. It probably isn't the only town to have been given the octopus treatment.

Anthropomorphic qualities sometimes only go so far. Far from being the aggressor, the terrifying sea monster of old, this one looks like he just wants to escape into the chilly Cornish sea, and who can blame him.