A map discovery hidden in a 17th century portrait

Wall maps are sometimes depicted in the background of painted or printed portraits.  Almost always they are just a blur with a stroke of colour or a sign-like blot .  This is emphatically not the case in the portrait of Mildmay Fane , 2nd Earl of Westmoreland (1602-65) engraved by Peter Williamson in 1662. 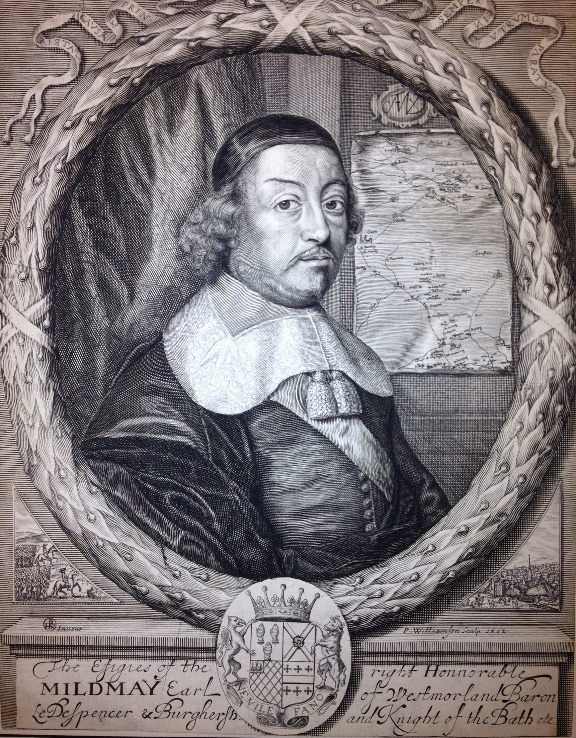 The Earl is depicted sitting in front of a wall map showing Lincolnshire and parts of Northamptonshire and  Nottinghamshire with rivers, roads and numerous placenames in microscopic lettering.   A compass rose at the top left suggests that the original was cut from a larger map of England and Wales but in fact the map – if it actually  existed – was probably a purpose-made manuscript. 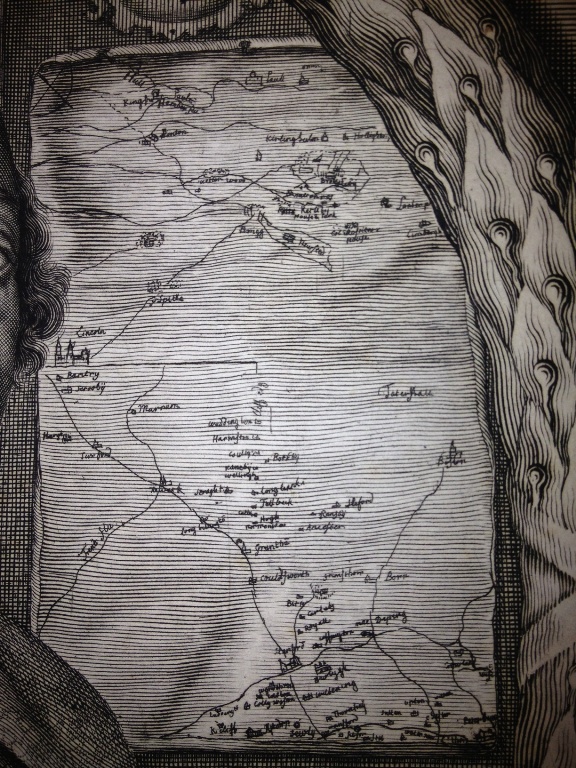 Even taking into account that it is oriented to the  North-East, the geographical realities are slightly distorted,  there are blank spaces in the East even though the area is relatively densely populated. And it appears to show roads, which were not to be found on any known contemporary printed wall maps, notably the so-called Quartermaster-General’s Map, derived from Saxton’s wall map of 1583 and engraved by Wenceslas Hollar.

A close study suggests that it dated from the time of the English Civil War, and probably from about 1646,  since it names ‘Col Rossiter’s House’, though Edward Rossiter of Somerby (1618-69) , a colonel in the parliamentary armies, had made his peace with Charles II and been knighted by 1662.  The Earl’s clothing also seems old-fashioned for the 1660s, suggesting that the painting from which the print was probably copied  was created in the 1650s. The selective depiction of the terrain suggest that the map commemorates a military campaign, such as that culminating in the siege of Newark in 1645-6.

It seems unlikely though that in the wake of the restoration of Charles II in 1660, the Earl of Westmoreland would have wished to draw attention in the print to a royalist defeat. The map does however breathe strategy and local power politics.  Its most striking feature  are the names of great houses that are sprinkled across and including the Earl’s own seat of Apethorpe (recently restored by English Heritage and seeking a new owner),   the Earl of Exeter’s home at Burghley and  Tattershall and Grimthorpe  castles, then the homes of the earls of Lincoln and Lord Willoughby de Eresby respectively – as well as Col. Rossiter’s House.

Regardless of whether or  not it represented a military campaign, it presents the framework of  power in that part of England during the Civil War as perceived by one of the actors at the time.  In this it resembles the tapestry maps created of the midland counties by various generations of the Sheldon family after 1580 and the  copies of Saxton’s county maps that were annotated with the names of justices of the peace by Lord Burghley between 1572 and 1598 by Lord Burghley, now in the British Library (Royal Ms 18.D.III).

It may well represent a type of map of which virtually no examples now survive, but which the nobility and gentry might have used to plot their marriage strategies and electoral campaigns.  Small though it is, it deserves further study – which is the reason why an example has just been purchased by the British Library.