Made with the British Library's map collection: The Isle of Eels

A few weeks ago we were delighted to meet the author and artist Rus Madon who has used maps from the British Library's map collection to create his own modern map of historical geography. Despite containing an only moderately dreadful pun on the name of Ely, the map sets the scene of Rus's historical novel, and also gives us a really good picture of how the Fens looked in the 11th century. How relevant those old maps can be. Rus writes:

I am writing a Young Adult story about a girl who lives in modern-day Ely, a city in the fens a few miles north of Cambridge. She travels back in time to the year 1071 when Ely was defended against the Normans by Hereward the Wake. The more I wrote about 11th century Ely, the more I wondered what it actually looked like. So to help answer the question, I set about drawing a map of medieval Ely. 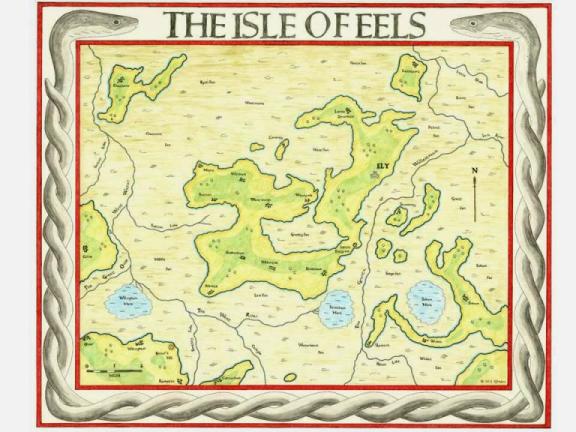 The fens were drained by the Dutch in the 17th century, and this reclaimed landscape is now fertile farmland. I used the resources of the British Library to look for the oldest maps of the area prior to this engineering feat. All maps of the area are thought to derive from a survey of the area carried out by William Hayward at the beginning of the 17th century. This map was destroyed in a fire, but it is believed that Sir Robert Cotton, a keen collector of fenland maps, had a copy made. 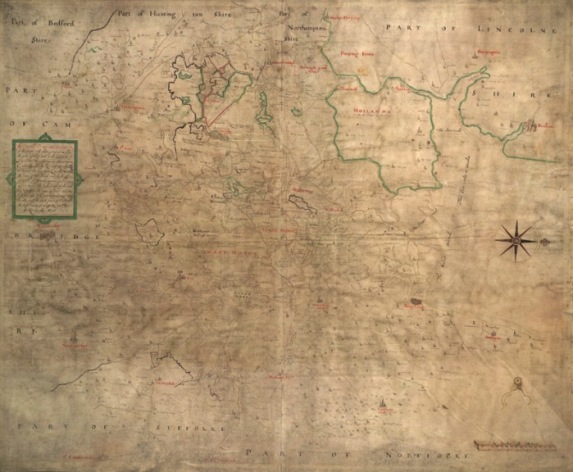 After William Hayward, A map of the Fens, circa 1620. Ink on parchment. Cotton MS Augustus I.i.78

It is an extraordinary document. Looking at the hand drawn map, you can see the lost Isle of Eels emerging from the fens; I was literally looking back in time. 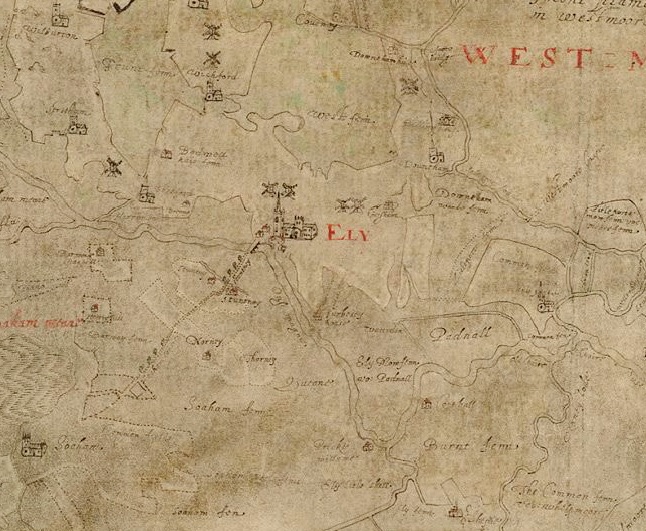 I supplemented this information with a review of existing Ordnance Survey maps, using the 5 metre contour line to sketch out land that would have been above the ancient water table. I then did what every good cartographer needs to do: Fieldwork.

During the summer of 2013 I drove the back roads and lanes that criss-cross the island, making adjustments to my map, extending the sweep of a hill, noting natural hollows in the ground, and removing the causeways and embankments that had been added much later. With the island outline now mapped came a greater challenge; how to determine the courses of the old waterways. Two huge artificial gouges to the northwest of Ely look like a spaceship has crashed and furrowed a path towards the sea. These are in fact two “rivers” commissioned by the 4th Earl of Bedford in 1630 which helped in the process of draining the fens. This, along with other workings over the centuries carried out in the fens, resulted in the modern day river system of the Great Ouse flowing west to east and joining up with the Granta (now the Cam) to flow north to the right of Ely. If I wanted to know where the rivers used to flow, I was going to have to dig deeper. Again, the British Library opened her vaults and I came across a pivotal paper published by Major Gordon Fowler in 1934.

This paper outlined the possible ancient watercourses of the area. Along with several other authors and notably the excellent Henry Darby, I pieced together how the rivers would have flowed around the island in Saxon times. The Granta has not changed much since those times, but it came to light that the West River flowed east to west and joined the Great Ouse to head north to the left of Ely! This was a very different system to that seen today. Once a few of the Roman lodes had been added back in (such as Reach Lode and the famous Cardyke), the geography of the map was complete. The final step was to add the main settlements that would have existed in 1071. For this I used a mixture of references from the Domesday Book and the Liber Eliensis, the so-called Book of Ely, written in the 12th century by monks at Ely Abbey.It took 200 hours to complete the map (a copy of which I donated to the British Library), but it was worth it. Now I can travel back in time to 1071 and see the Isle of Eels through the eyes of my heroine.