The 1780s were  very difficult years  for George III.  In addition to the political turbulence and the personal  trauma that he suffered at the time of the loss of the American colonies in 1783, he had a period of severe mental illness in 1788-9.  During this period he seems to have found solace and escape  in concentrating on building up his private collection of maps and views and by the end of the decade these were housed in the room next to his bedroom in Buckingham House.  Most of this collection of maps and views is now in the British Library and known as the King’s topographical Collection.

By the end of the decade George was consulting some of his collection for very practical ends.  Following his recovery from mental illness in 1789, the King thought of abdicating and retiring to Hanover.  The collection includes a volume of plans of palaces in and around Hanover dating from 1763 (now Maps 7. Tab. 17.).  While George might originally have asked for the volume to be sent from Hanover, which he never visited, out of curiosity (he was passionately interested in architecture), by the summer of  1789 he must have been focused in investigating his possible future living quarters. 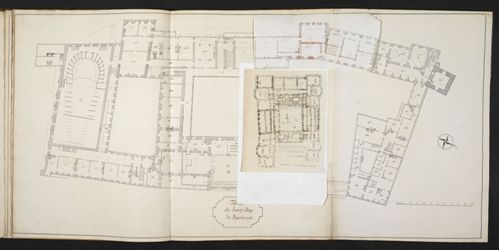 Be that as it may, about 15 years ago a folded piece of paper was found inserted loose in one of the plans. On one side was an order of service dated Friday 10 July which has since been identified as relating to a service in St George’s Chapel, Windsor on that day in 1785.  On the other side was a pencilled measured plan and on the back was a roughly drawn inked plan for a grand palace.  Looking more closely, no less than four grand staircases are sketched in, with long corridors instead of a suite of rooms.  This design, for a very grand palace, is very different in its vigorous character and strange content from the pencilled plan on the other side. It is difficult to imagine who could have drawn and inserted the plan other than the King: the combination of order of service and of architectural plans is very telling as is the fact that it was found where it was.  Though George allowed distinguished contemporaries access to his collections, it is unlikely that a courtier would leave such an item or that an English visitor would be interested in Hanoverian palaces.  The is also a touch of the manic in the way in which the inked plan is drawn. 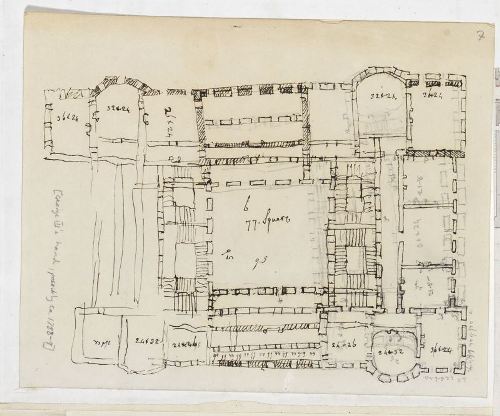 So perhaps one can reconstruct what happened – not with certainty but with a strong degree of possibility.  And that is that one day – or perhaps sleepless night – George decided to look at the volume of plans.  One plan, showing a floor of the town palace in Hanover and includes a flap with proposals for changes, caught his eye – but then he was disturbed or had to leave.  He inserted the first thing that  came to hand as a bookmark, intending to return to the volume.

However the trauma passed and the French Revolution and the consequent threat of invasion by France inaugurated a period of great popularity for George III in Great Britain.  All thoughts of abdicating and retiring to Hanover were forgotten – as was the volume of plans of Hanover with its very personal bookmark.