Fruits of Espionage in the K.Top

Each region covered by King George III’s Topographical Collection has its own  particular character.  The volumes covering France are rich in maps that must have been taken by spies from the official French archives – the Bibliothèque Nationale de France and the French National Archives mirror this situation by having numerous maps with an official English provenance.

We have to say ‘must’ because while the circumstantial evidence is often very strong, conclusive documentary proof is almost always lacking. There is only one incontestable piece of evidence of espionage in the King’s  Topographical Collection. It comes in a contemporary scribbled note stating that an agent – presumably working in the French War Office in Versailles – was paid 50 guineas by the Duke of Cumberland for a series of official plans of Metz, then an important French outpost in the North-East,  dating from 1727 and 1760. [Maps K. Top. 67.80 - 2 – a,c,d-g; for the agent, Rex Whitworth, William Augustus, Duke of Cumberland.  A Life (London: Leo Cooper, 1992), p.173].

But one can be fairly confident about the source of other maps and plans. The papers of Charles II’s ambassador in Paris, Richard Graham, Viscount Preston, now in the British Library, contain a string of letters explaining in detail how Preston’s agents managed to intercept many maps of French border regions and of fortresses in France and abroad in the early 1680s  as they were trundling through the streets of Paris on their way from Versailles to the Invalides to be copied. [Peter Barber, ‘Necessary and Ornamental: Map Use in England under the Later Stuarts 1660-1714’, Eighteenth Century Life 14/3 (November 1990), p.19].

The numerous detailed manuscript maps of Picardy and Flanders dating from the 1650s and the plans of individual forts in the King’s Topographical Collection could well be among the ones stolen then [Michel Desbrière, Champagne Septentrionale.  Cartes et Mémoires à l’usage des Militaires 1544-1659 (Charleville-Mézières: Societé d’études ardennaises, 1995), pp. 79-96 ]. One particularly ornate manuscript plan, showing   Huningue near Basel on the Rhine, is in the style of the maps copied in the early 1680s by skilled miniaturists in the workshop in the Invalides  for inclusion in luxurious manuscript atlases being prepared for the King and his most important ministers.  It even  contains a handsome miniaturised portrait of Louis XIV himself!

It is more difficult to pinpoint the way in which  other, later, French military maps reached the King’s Topographical Collection, but there is again evidence among the British Library’s other collections, that some French military engineers facilitated their transfer to British service in the course of the 1690s by carrying with them the latest plans of important French forts. [Peter Barber and A. Stuart Mason ''Captain Thomas, the French engineer': and the teaching of Vauban to the English', Proceedings of the Huguenot Society, xxv (3) (autumn 1991), 279-287]. 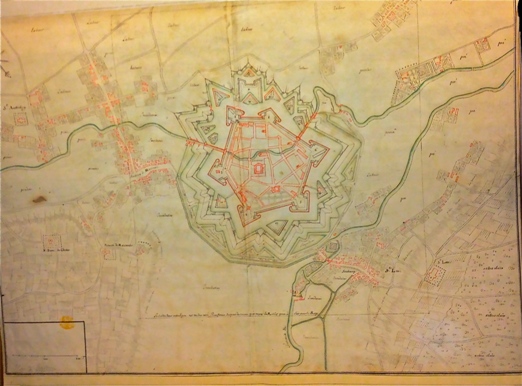 A couple of weeks ago an important new addition to this group has come to light.  It is a manuscript plan of Hesdin near Calais of about 1692 (Maps K Top 58.24). Hesdin  had only finally been absorbed into the French dominions in the 1650s and was one of a  group of towns that the famous French military engineer, Sebastien le Prestre, Seigneur de Vauban  (1633-1707), was re-fortifiying in the early 1690s utilising the latest technology and defensive theories, to protect France’s northern borders.

But this plan does not just show the fortifications of Hesdin. It contains evidence that it was being used in the French war office, to monitor their efficacy. There is a penciled square around the centre of the plan with an inscription stating that  ‘the square of which this line is one of the sides encloses the extent of the terrain which is occupied by the relief that has been made for the King’ (‘Le Cadre don’t cette ligne est un des cotés Renferme l’espace du terrain qu’occupe le Relief quon a fait pour le Roy’). The style of the hand is the same as that of the plan and suggests that it was not a later addition but formed part of the plan from the start.  The ‘Relief’ was one of the so-called ‘Plans et Reliefs’ or immensely detailed 3-D relief models of towns and forts prepared for the French authorities from the late 17th century. Many are to be seen nowadays in a museum devoted to them in the Invalides in Paris and in the basement of the Musée des Beaux Arts in Lille.

The relief model of Hesdin does not seem to survive, and may no longer have been in existence when the plan was illicitly removed from the French archives. However it offers a possibly unique insight into how the relief models were actually used on a day-to-day basis. Far from being expensive playthings, they were used in combination with two-dimensional maps – like the plan in the King’s Topographical Collection – to monitor the effectiveness of France’s defences and, if necessary,  to follow the course of a potential siege. In this respect they foreshadowed the computer simulations and the interplay between Google maps and Google views of our time.

More – probably much more – of great importance for French history remains to be discovered among the maps in the French sections of the King’s Topographical Collection. However they will remain hidden unless a sponsor can be found to enable our highly-skilled cataloguing team to work at them.