In 1550 the Norman cartographer Pierre Desceliers made a large world map (135 × 215 cm, 4.4 × 7 feet) which had been commissioned as a gift for King Henry II. This gift was intended to help rehabilitate the career of one of Henry’s ministers who had fallen out of favour, and no expense was spared in its decoration. In fact, as Henry already owned a large world map by Desceliers, it is likely that a team of artists was recruited specifically to decorate the map at a higher artistic level than the earlier map. As a result, the 1550 map is one of the most beautiful to have survived from the Renaissance, and as part of its elaborate hand-painted decoration, there is a rich program of illustrations of human monsters. 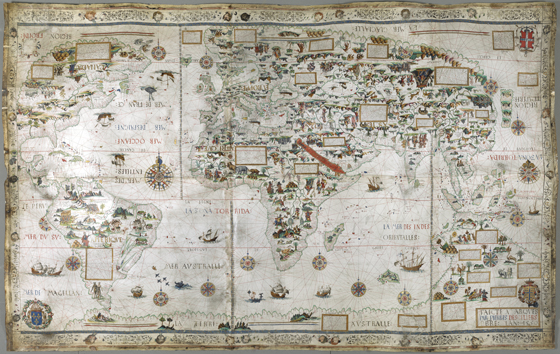 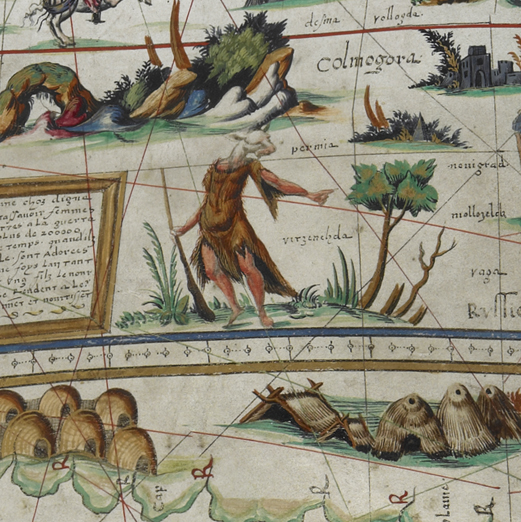 Near the northern coast of Asia – a coast depicted in a style that Desceliers reserves for shores that are poorly known – there is a cynocephalus or dog-headed man, and beside him the words hommes monstruces, “monstrous men.” To his left there is text that indicates that this is the Region of Darkness, where the people live like beasts, without morals or manners, without light for half the year, and conduct a brisk trade in furs. The image of the monstrous cynocephalus seems intended to symbolize the wild and dangerous nature of this whole region at the northern edge of the world. 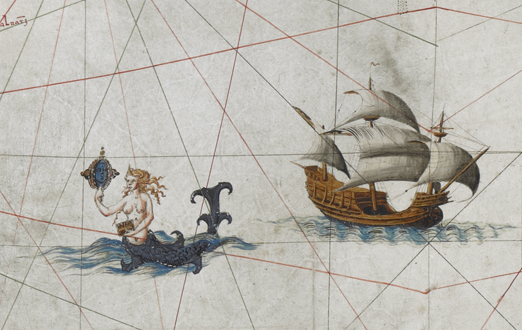 The siren and ship from Section 32

In the ocean off the southern coast of Africa swims a siren holding an elaborate mirror in one hand in which she admires herself, and a comb in the other. Both objects symbolize beauty but also vanity. To her right there is a ship, and the water beneath the ship is painted in a different color, and also in a different style, than that beneath the siren. This difference shows that different artists were hired to paint the monsters and the ships on Desceliers’ map, an interesting insight into his workshop. 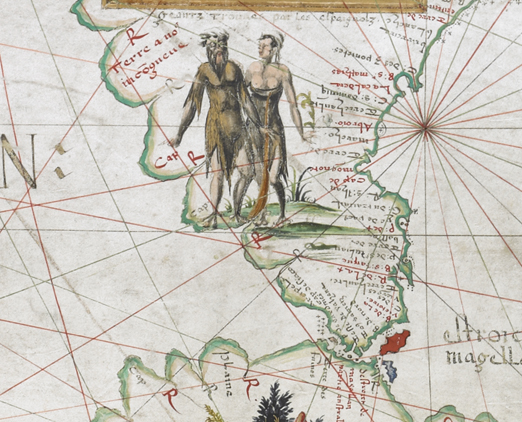 The Patagonian giants from Section 30

At the southern tip of South America there is an image of two Patagonian giants. It was Antonio Pigafetta, in his account of Magellan’s voyage around the world, who had first reported giants in this area, and they are depicted on several earlier maps. However, the artist whom Desceliers hired went a step further than others in emphasizing the giants’ monstrosity by giving them – strangely – the feet of birds. 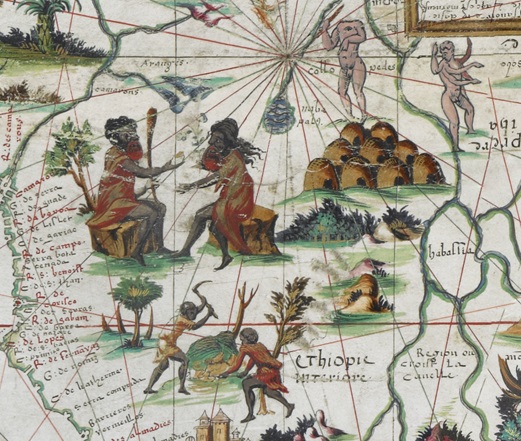 In the centre of Africa, which in European accounts was often held to be the home of monsters and other exotica, two monstrous races of men are depicted. One is a blemmyae, a man with his face on his chest, but this is a cyclopoid blemmyae, with only one eye instead of two. To his right is a man with six arms. Earlier cartographers had located cyclopoid blemmyae in Africa, but the six-armed man seems to be an addition to the monsters of this area by Desceliers or the artist he had hired. 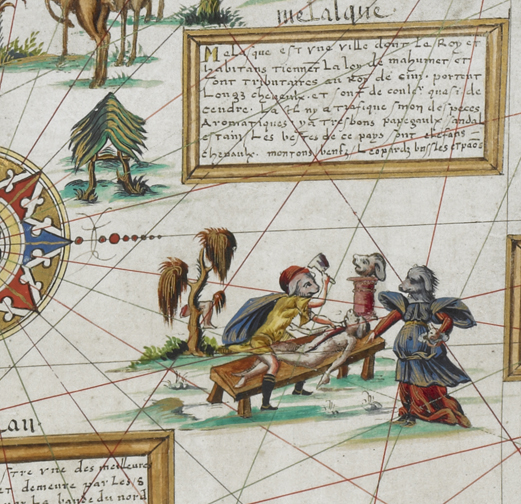 The cynocephali cannibals from Section 34

And finally, in the map’s huge hypothetical southern continent there is another image of cynocephali or dog-headed people. These are cannibal cynocephali, for they are butchering one of their own, evidently to eat him. The image is all the more shocking for its combination of brutal behavior and dog-like faces with European clothing. This grisly scene is based on Marco Polo’s description of the Andaman Islanders, which is cited just to the right.

The decorative program on Desceliers’ map includes cities and sovereigns, non-monstrous animals and peoples, ships, mountains, vegetation, coats of arms, and elaborate compass roses. I hope that this brief look at some of the monsters will inspire further examination of the map in my book The World for a King: Pierre Desceliers’ Map of 1550.