A recent donation of BBC Opera Librettos, from the library of Dr Aitken Cooper, which were broadcast during the 1920s highlights the scope and educational value of the service provided by the Corporation which from the outset strove to 'inform, educate and entertain'.  Initially, the librettos could be requested so that listeners could follow, often in translation, the text of the opera broadcast every month. 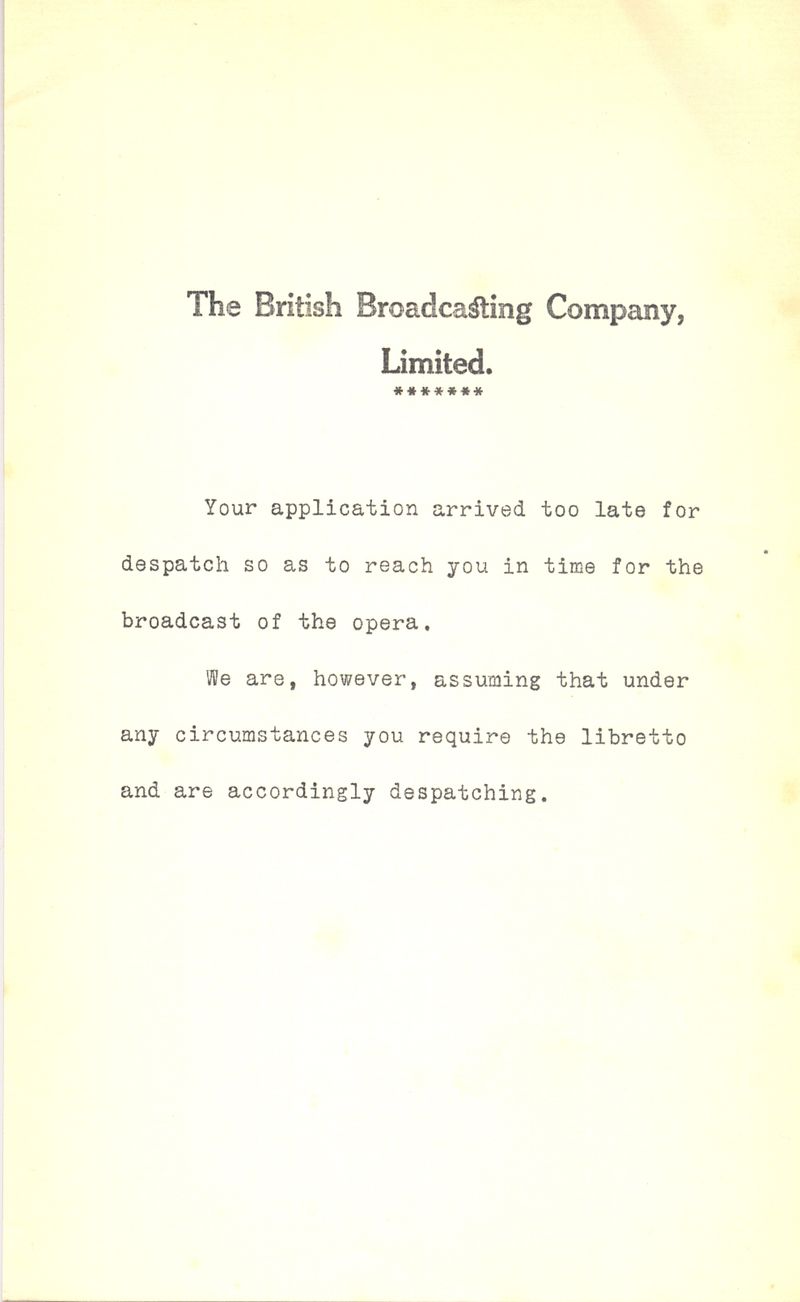 The opera broadcasts began in 1926 and were transmitted from station 2LO at Marconi House in London with the transmitter positioned on the roof of Selfridges department store in Oxford Street.  They became so popular that by 1928 there were two broadcasts of the same work a few days apart and the BBC began a subscription scheme for the libretti, a series of twelve costing two shillings.

Amongst favourite works such as Tannhauser, Rigoletto, Faust and the Barber of Seville can be found more unusual operas such as Balfe's Bohemian Girl, Flotow's Martha and Philemon and Baucis by Gounod.  However, the BBC upheld its claim to inform and educate by broadcasting unusual and new works such as The Red Pen, 'a sort of opera' by A.P.Herbert and Geoffrey Toye. 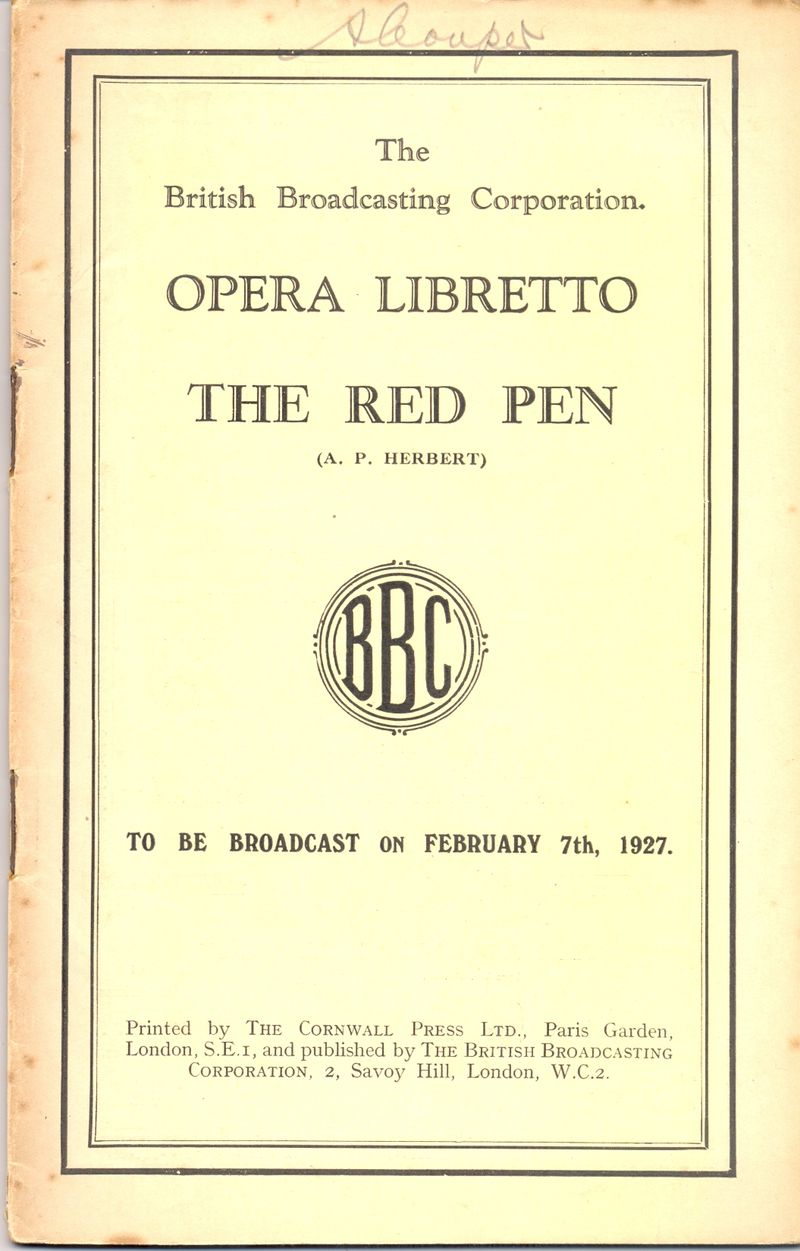 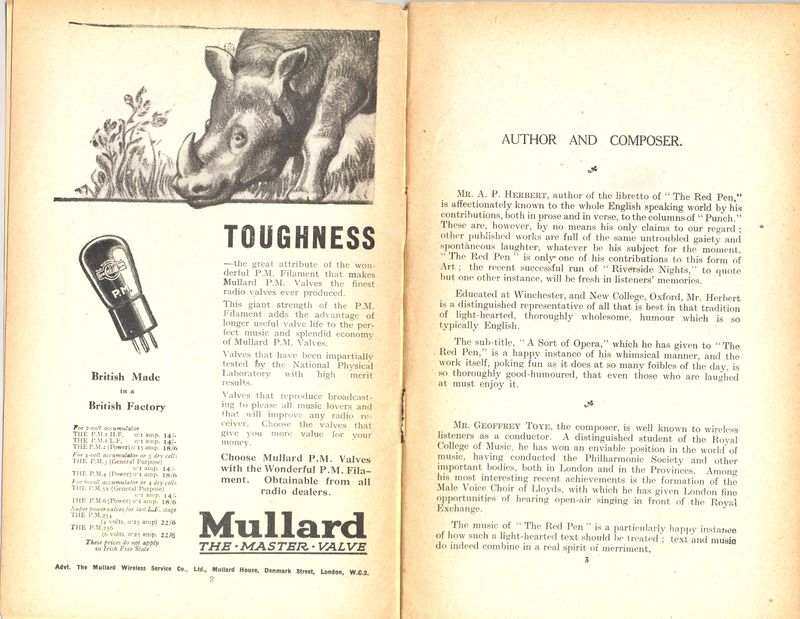 Although the librettos do not give details of the musicians involved in the broadcast, a glance at the Radio Times reveals that The Wireless Orchestra was conducted by the composer Geoffrey Toye.

On 22nd November 1927, the same day that Clifford Curzon was heard in a recital with the Victor Olof Sextett, another unusual work was broadcast.  This was Penelope by Herbert Ferrers who gave up his studies of science and literature at the age of twenty to study composition under Sir Charles Stanford and Charles Wood at the Royal College of Music where he won the Sullivan Prize for composition.  He became musical director to Sir Frank Benson, studied in Paris, and conducted throughout England most notably with the Carl Rosa Opera Company.  Around 1922 his sight completely failed and today he seems to have all but dissappeared.  A rather sad letter from Haydn Wood to BBC Director of Music Productions in 1944 explained that 'Herbert Ferrers is a blind composer whom Wood likes to help by orchestrating his compositions, promoting his music and writing letters to musical organisations reminding them of Ferrers's financial needs.'

It would seem that a standard cast was used for each broadcast as John Armstrong played the part of Telemachos in Penelope and that of Dan in Joseph and his Brethren by Etienne Henri Mehul.  Joseph was played by well known British lyric tenor Frank Titterton. 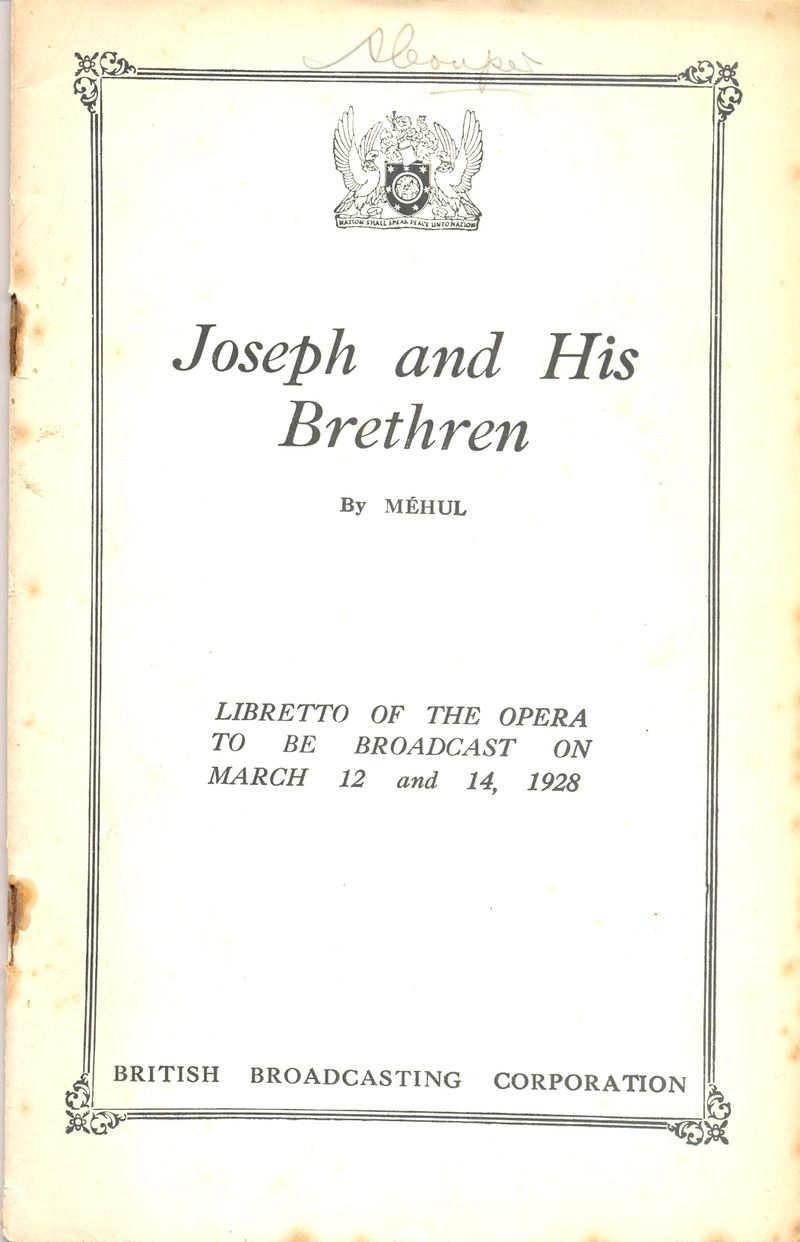 It is interesting to see that in January 1928 the Monteverdi opera The Return of Ulysses was broadcast from 'a new edition of this old work...prepared with great care by Vincent d'Indy.'  The first modern performance of the opera was given in Paris in this edition on 16th May 1925 and the BBC, then always keen to inform and educate, were quick to introduce the work to the British public.

Posted by Jonathan Summers at 12:37 PM

Book now for the Beethoven exhibition