The World and Traditional Music collection at the British Library comprises both published and unpublished recordings. Within the sphere of sound and audiovisual archiving, the unpublished holdings bring us into the realm of the “research archive”, as defined by IASA and in contrast to Broadcast Archives or National Archives. The distinction is quite fine, of course, because all archives are used for research broadly defined. However, one way to think of a research archive is as one containing primarily unpublished materials made by researchers, for example, by musicologists during fieldwork. And one tends to find too that people leading research archives are themselves researchers who know the discipline and its research concerns and trends. There are many such archives around the world – the American Folklife Centre of the Library of Congress, the Ethnomusicology Archive at University California Los Angeles, the Vienna Phonogrammarchiv of the Austrian Academy of Sciences, the Research Centre for Ethnomusicology at the CNRS in Paris, the Archives of Traditional Music in Bloomington, USA, the International Library of African Music, the Institute of Papua New Guinea Studies - all represented at the conference.

The conference theme was “In transition: access for all”, an apt one for a nation on the rise, but relevant throughout the world as we aim to transfer the results of ethnographic research over the past century into digital form so that communities, musicians, scholars and the general public can have access. Of concern to research archives is that access is provided fairly and ethically. Many papers were thus about preservation and access projects and there were several formal papers and led discussions on issues of intellectual property rights and ethics. In particular it was hugely interesting and inspiring to hear from colleagues in some of the research archive centres in India, such as the Travelling Archive, the Sangeet Natak Academy, the Archive of North Indian Classical Music in Kolkata, Naadsaager Archives and Documentation Society for South Asian Music, Samvaad Foundation in Mumbai. 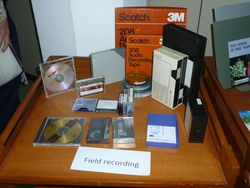 Field recording formats at the ARCE 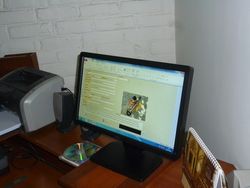 Field recordings are digitised and made available for researchers onsite