The British Library has a long tradition of collecting printed and manuscript sources for Mozart’s music, cultivated both under its previous guise as part of the British Museum and in its present incarnation as an autonomous library at St. Pancras.  Mozart himself visited the British Museum in July 1765 at the tender age of nine and took the opportunity to deposit a copy of his first sacred composition (and only setting of an English text), God is our Refuge, written out with the assistance of his father Leopold.  He may therefore be counted as the first in an illustrious line of composers to have presented manuscripts to the Library.

Since that time, the Library’s Mozart holdings have grown apace, with items acquired individually from dealers and at auction, via the legal deposit of music published in the UK, and as part of larger collections – notably those amassed by Vincent Novello and Edward Meyerstein.  Without question the most important single acquisition was the donation in 1986 by the heirs of Stefan Zweig of his collection of musical and literary autographs.  Mozart was at the core of Zweig’s interests as a collector, so that by the time of his death in 1942 he had acquired no fewer than 17 important Mozart documents (another was added to the collection in 1955).

They included autograph manuscripts of the song Das Veilchen, the horn concerto in E flat major (K. 447), a draft of Cherubino’s aria ‘Non so più cosa son’ in Le nozze di Figaro, and the string quintet in E flat (K. 614), as well as the thematic catalogue that Mozart maintained from 1784 until his death in 1791.  In addition to musical sources, Zweig also acquired five Mozart letters and, most remarkably, the contract of marriage between Mozart and Constanze Weber (shelfmark Zweig MS 69).  Zweig had acquired this document in 1935 from the collection of the financier and philanthropist Sir Edgar Speyer (1862-1932) and it had previously formed part of the Hauser collection, which was sold at auction in Leipzig in 1905.

The contract is dated 3 August 1782, the day before the wedding at St. 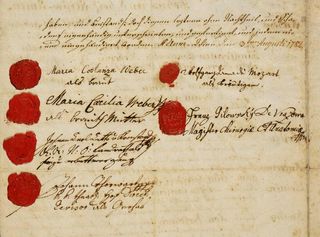 Stephen’s Cathedral in Vienna.  It was signed by Constanze Weber, her mother Maria Caecilia Weber, her witness Johann Carl Cetto von Kronstorff and her guardian Johann Thorwart, as well as by Mozart (‘Wolfgang Amadè Mozart’) and his witness Franz Gilowsky.  The seals of each signatory appear on the document, Mozart’s in the form of his initials ‘WAM’.  The only other person present at the wedding, in addition to the clergy, was Constanze’s younger sister, Sophie. The text of the contract stipulates that two copies were to be drawn up and signed, one for each spouse.

The events leading up to the marriage are documented in Mozart’s correspondence and they provide much biographical fodder for analysing the composer’s strained relationship with his father.  The wedding was arranged in some haste and went ahead despite the fact that Leopold Mozart’s blessing was not received in advance (it was conveyed in a letter that Mozart only received the day after).  Mozart subsequently wrote a conciliatory letter to his father dated 7 August 1782, in which he offers a touching description of the ceremony itself: ‘When we were joined together, my wife and I began to cry – everybody was touched by that, even the priest – they all wept when they saw how deeply moved we were in our hearts’ (translation by Robert Spaethling).

The marriage contract has been published in facsimile and in transcription, and has been shown at various exhibitions in the UK, Austria, and the US since 1934. The British Library has now digitised this document to make it freely available on the internet, as part of its Digitised Manuscripts portal.

Posted by Rupert Ridgewell at 4:57 PM