Over 1000 recordings of music recorded by John Brearley in Botswana, primarily among San or Bushmen people in the Kalahari, have been made available on the British Library Sounds website. 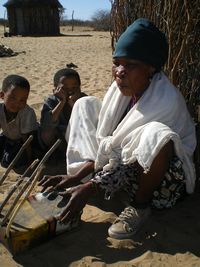 Recording of Oba playing the zhoma and singing.

John Brearley’s collection began with his first trip to Botswana in July 1982 to investigate and record traditional music, and to observe the extent to which the influence of radio and recorded music had interrupted the use of traditional instruments. In particular he wanted to learn about the music of the Basarwa (San / Bushmen) and so the collection includes recordings from a range of Bushmen groups including the !Kung, Nharo and Makoko, and features performances of healing dances, games, and instrumental tunes on a range of indigenous instruments. John returned to the Kalahari many times from 1982 to 2007. 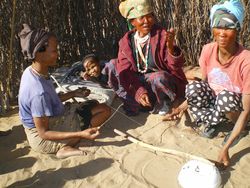 During his travels in northern Botswana John came into contact with the anthropologist Hans-Joachim Heinz. Heinz had also made recordings of music and ceremonies, which he deposited at the British Library. These are also available online. Heinz also made films during his research in Botswana. Copies of these are in the British Library's collections as C312.

John wrote a report of his very first trip in 1982 which was published in Botswana Notes and Records (volume 16). This includes details of instrument tunings and musical transcriptions of brief extracts from the recordings.