Poetry in Sound exhibition: Britten and Auden in the spotlight

Following the launch of the new British Library exhibition Poetry in Sound: the music of Benjamin Britten, we’ll be putting the spotlight, on this blog, on some of the themes we’ve chosen to explore in the exhibition. I hope these posts will tempt you to come and discover the manuscripts, unpublished recordings, rare printed materials and photographs we’ve selected from our archives. 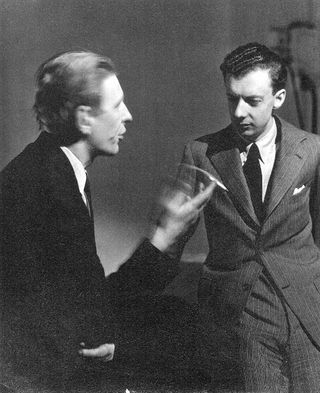 At the start of the exhibition we focus on one of the most important of Britten’s early relationships: his friendship and collaboration with the poet W.H. Auden (1907-1973). Britten and Auden attended the same school, Gresham’s, in Norfolk, but Auden was six years older, so their paths didn't cross until the mid-1930s, when both began working for the General Post Office Film Unit. Britten confided in his diary that Auden ‘is a remarkably fine brain’. Auden was struck by Britten’s sensitivity in setting the English language to music.

Their most famous collaboration was Night Mail (1936), a GPO documentary depicting the Postal Special train puffing its way from London to Glasgow. There's a clip from the film in the exhibition (the final section, where Auden’s famous verse ‘This is the Night Mail crossing the border’ is heard to Britten’s evocative accompaniment of sandpaper, wind machine and a side drum representing the sound of the train). Alongside is a leaf from Britten’s handwritten score, showing those unconventional musical forces.

Although Britten is probably best known today for his operas, songs and music for children, he spent much of the 1930s composing for film, radio and the theatre. He was involved with the Group Theatre, an experimental theatre company which presented plays by T.S. Eliot, Louis MacNeice, Auden and Isherwood and staged lectures, exhibitions and debates. Britten composed music for five productions between 1935 and 1938, including Auden and Isherwood’s plays The Ascent of F6 and On the Frontier. 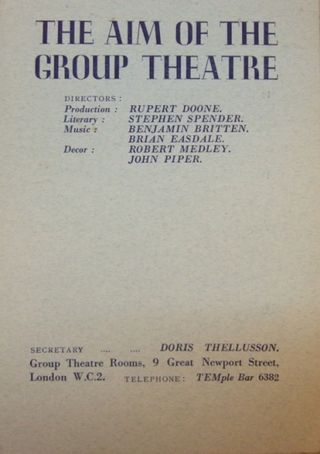 The Ascent of F6 features the song ‘Funeral Blues’, which, with its opening line ‘Stop all the clocks’, later became more famous as a poem - reaching an even bigger audience after its appearance in the film Four Weddings and a Funeral. Among the many rare or unique recordings in the exhibition is Britten and Auden’s song ‘Stop all the clocks’ performed by Peter Pears (tenor) and Britten (piano) in an unpublished test pressing made for Decca in 1955.

Auden and Isherwood travelled to the USA shortly before the outbreak of World War II, and Britten followed soon afterwards with Peter Pears. In America, Britten and Auden collaborated on a rather unconventional operetta, Paul Bunyan. The character Paul Bunyan was a giant lumberjack of American legend, who had a blue ox called Babe as a travelling companion. The operetta was first performed at Columbia University, New York in 1941.

Whether through annoyance at the Englishmen for attempting a work on such an all-American theme, or dislike of the piece itself, the critics were overwhelmingly hostile. ‘As bewildering and irritating a treatment of the outsize lumberman as any two Englishmen could have devised’, wrote Time magazine. A ‘musico-theatrical flop’ was the verdict of composer and critic Virgil Thomson.

The piece was seemingly much too long. Milton Smith, the director, told Britten’s biographer Donald Mitchell of his unsuccessful attempts to persuade Britten and Auden to make cuts. After the first night, he was begged to make the cuts he'd long been advocating but by then, he said, ‘the boat had sailed’. Paul Bunyan was withdrawn, and only revived in 1976, in a much amended version. In the Donald Mitchell Archive at the British Library, and featured in the exhibition, are some rare colour photographs of the première and a recording of part of it. Although the sound quality of the recording is quite poor, it gives us a tantalising glimpse of how Paul Bunyan sounded before Britten revised it, and how it was received in 1941. Even if the critics remained unmoved, it's clear from the laughter and applause that the audience members were enjoying themselves.

As well as composing for the cinema and theatre, Britten also provided music for nearly 30 UK and US radio productions in the 1930s and 1940s. The Rocking-Horse Winner was a radio play adapted by W.H. Auden and James Stern from D.H. Lawrence's short story of the same name, first broadcast by CBS in 1941. Britten composed eight numbers, which were conducted by Bernard Herrmann. The score doesn't seem to have survived, but the annotated script, on display, is preserved among the James Stern Papers at the British Library.

Britten’s last major collaboration with W.H. Auden is also one of his best-known pieces, the Hymn to St Cecilia, for unaccompanied chorus.  The pair worked worked together closely on the text while Britten was still living in the USA. In March 1942, homesick for England, Britten left America on a cargo ship to return permanently to the UK with Pears, and during the return voyage completed the music. It was first performed in November 1942, in a radio broadcast by the BBC Singers.  The first page of Britten’s autograph draft, on display, reveals that he originally called the work ‘Song for St Cecilia’.

Auden remained in the USA, and with the closing of this chapter in his life, Britten abruptly cut his ties with the poet. Like many people who upset Britten or outlived their usefulness, Auden became one of his 'corpses', former friends and associates who were banished from his life.

In my next Britten post, I'll be focusing on the composer's attitude to war, his stance as a conscientious objector and his mighty War Requiem.

Posted by Sandra Tuppen at 5:49 PM