An exciting new addition to our Digitised Manuscripts website is a little anthology written in the thirteenth century which combines sacred Latin songs with French courtly lyrics. The vast majority of the British Library's medieval music manuscripts are connected with the church, but manuscripts such as this remind us that the division between sacred and secular should not always be taken for granted in the Middle Ages. 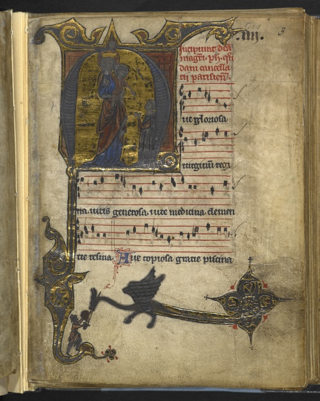 Egerton MS 274 was probably originally written in the 1260s for use in private devotion. The first section begins with an initial letter 'A' depicting the Virgin and Child with a tonsured figure in a grey robe kneeling before them. By zooming into the image (at this link) it is just possible to make out that the man is holding a tiny book – about the size of this manuscript, the pages of which measure only 15 x 10 cm. Probably this is intended as a representation of Philip the Chancellor of Notre Dame in Paris, since the first section of the manuscript consists of 28 Latin songs which he composed, several of which are here set in two-part polyphony. 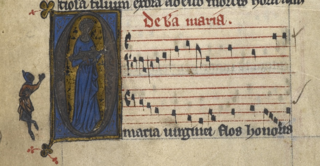 A possible clue to the identity of the first owner of this manuscript is found a few pages later, with a charming picture of an ape riding on horseback: his coat of arms is that of the Torote family, which included many prominent churchmen in the later thirteenth century, one of whom might have inspired this back-handed attention.

As well as Philip the Chancellor's poems, the anthology includes 18 French songs of the trouvères, the northern French equivalents of the troubadours in the south. Curiously, and rather frustratingly, eleven of these songs have been defaced by a later owner: the first stanza of each poem has been erased, with a new Latin text written over the French words and usually a new melody too: all that remains is the initial letter, and the later verses of the French text, written without music on the following pages. 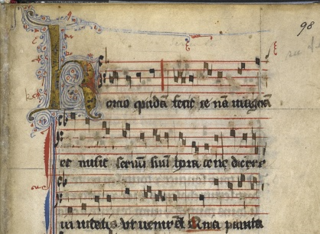 a Latin responsory chant written over a deleted trouvère song

The rest of the book includes some Latin narrative poems without music as well as substantial amounts of liturgical music, all in Latin and much of it added at around the time the French texts were defaced. These additions and alterations have the effect of making the book exclusively religious in content, and mainly liturgical in purpose. There is an interesting collection of sequences and other types of music used in church processions, some of them not known from elsewhere. At the end of the volume are a few pages written with German-style notation, instead of the square notes found earlier on. 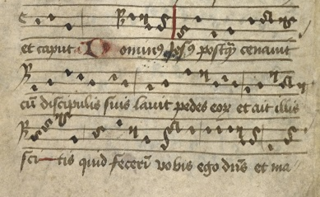 chants for the ceremony of foot-washing on Maundy Thursday

Egerton MS 274 has already been the subject of several articles and a Ph.D. thesis, but much remains to be explored in this eclectic manuscript. We will be publishing several more medieval music manuscripts on Digitised Manuscripts over the next few months, so please keep an eye on this blog for future updates.