Plotting for a Healthy Society

The visual representation of health information has long been integral to the improving the health and wellbeing of society. The Public Health section of Beautiful Science shows how the visual representation of this data—whether in a table, map or rose diagram has helped us to identify causes and cures of disease, track the spread of epidemics, and make the case for a better world.

In the beginning, there was data

John Graunt, an English haberdasher, was responsible for the first known table of public health data. As waves of plague ravaged London, parish clerks from 1603 were instructed to collect data pertaining to the causes of mortality within their constituency, collected in the Bills of Mortality, which were published on a weekly basis. In his Table of Casualties from Natural and Political Observations on the Bills of Mortality, patterns area easy to spot. 1636 was a dreadful plague year in London, whereas two years earlier, there were no recorded plague-related deaths.

The bills are also amusing from a contemporary perspective; the ‘Searchers’ who collected the mortality data were not trained health professionals and thus recorded some illnesses that from a contemporary perspective are quite amusing, or simply no longer exist. ‘Rising of the Lights’ and ‘Died of several accidents’ are personal favourites, and I recently learned that King’s Evil is actually scrofula (tuberculosis of the lymph nodes)—but so called due to the myth that if you were touched by the King (or later a coin bearing his head), then you would be cured of the disease. 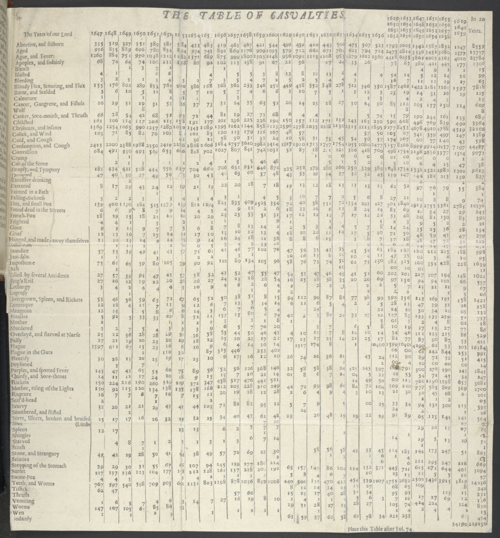 John Graunt, The Table of Casualties from Natural and Political Observations on the Bills of Mortality (1662)

The data within his Table of Casualties allowed Graunt to draw conclusions including:

John Graunt has been widely credited with as being the father of modern demography, and set the scene for the later study of vital statistics and epidemiology.

Maps that change the world

The mapping of public health data has its origins with a map produced by New York doctor, Valentine Seaman, during an outbreak of yellow fever in 1798 in an effort to identify the means by which the disease spread.  However, the best known and most influential map of public health data is probably Dr. John Snow’s “ghost map” in the he plotted cholera deaths on a map of Soho during the 1855 outbreak. The deaths were concentrated around a water pump on Broad Street, which it was later learned, was drawing water from a sewage-contaminated substrate. Although Snow suspected that cholera was a water-borne disease, this ran contrary to the leading theory of miasma (bad air), and he did not have the evidence necessary to prove his hypothesis. This map provided the proof he needed, even though germ theory was yet to be developed. Although Snow was not the first to plot cholera deaths on a map, his map of the 1855 outbreak in Soho was significant in that it acted as both a tool of discovery, as well as communication--  and achieved both exceedingly well. 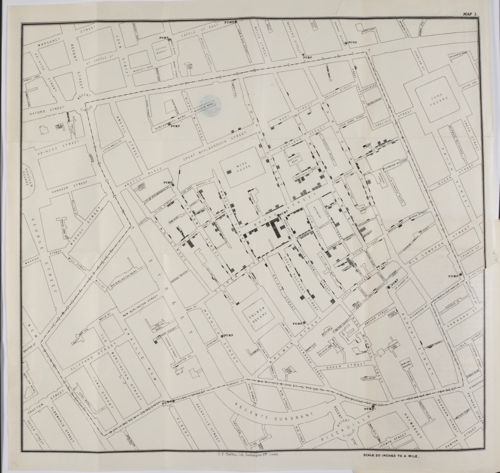 On the Mode of Communication of Cholera, John Snow. London, 1855

Mapping public health data continues to be vital today, particularly when paired with other types of demographic data. The UK Chief Medical Officer publishes an annual report, featured in Beautiful Science, in which a vast number of causes of mortality and morbidity are mapped. Data within the report is commonly visualised as cartograms, in which geographic area is morphed in accordance with population size. Shading adds an additional layer of information, making geographic distribution visible alongside the proportion of England’s population affected. 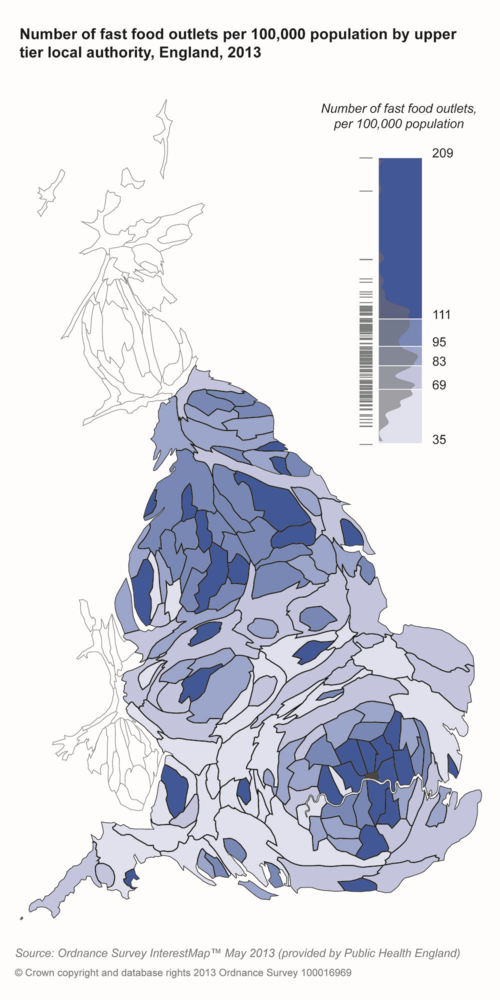 A red, black and blue rose

The visual representation of data can have an impact that dry statistics may not. In the aftermath of the Crimean War, Florence Nightingale was enlisted by the Royal Commission to write a report enquiring into army mortality in times of both war and peace. Although she presented ample statistics and made numerous recommendations, no action was taken. This may have been due to propaganda leaflets sent out by military doctors questioning her assertions; she realised she needed to make a completely airtight case in order to see these important health reforms implemented. 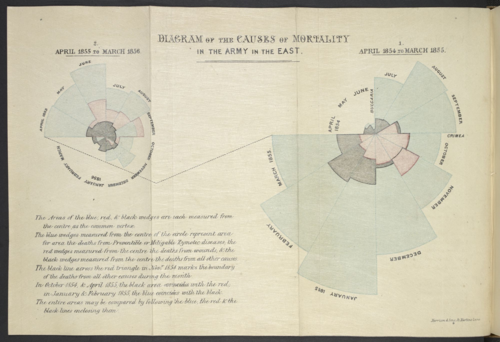 Diagram of the Causes of Mortality in the Army in the East Florence Nightingale. Notes on matters, affecting the health, efficiency and hospital administration of the British Army. London, 1858.

With a keen awareness that she needed to communicate to a diverse audience ranging from Queen Victoria to government officials, Nightingale devised the rose diagram. In her diagram, Causes of Mortality in the Army in the East, she shows that far more soldiers died in hospital to preventable diseases than perished due to battle-inflicted wounds. In these ‘roses’, each segment (corresponding to mortality over a period of time) extends away from the centre of the diagram at an equal angle. The square root of the radius of each segment varies in accordance with the data.

The report and its diagrams had a profound effect—numerous health reforms were passed—including improvements in ventilation, heating sewage disposal and more. Later sub-commissions drafted a sanitary code, established a medical school and put in place new procedures for gathering medical statistics. 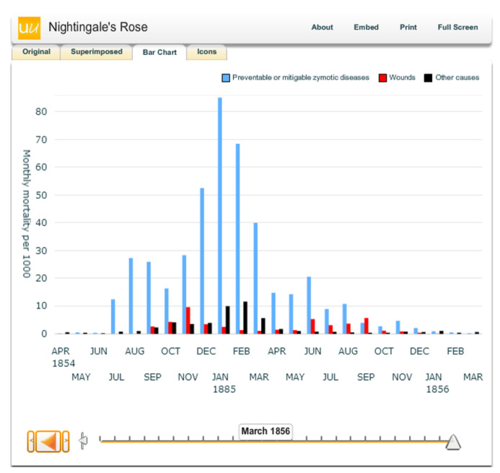 It is striking to compare Nightingale’s diagram with the same data pictured as a bar chart, as presented by David Spiegelhalter. Yes, it’s the same information and actually in some ways technically easier to read. But it is much more difficult to compare months a year apart on the bar chart than the rose diagram—and from the point of view of sheer visual impact, really doesn’t compare.

And what does this mean for us?

The question of whether visual rhetoric can play a part in public health campaigns is one that we’ve put to some experts, who have been involved in the public health section of Beautiful Science.

If you’d like to learn more, please join us for Seeing is Believing: Picturing the Nation’s Health—an event on the 28th of April featuring Professor David Spiegelhalter, Dame Sally Davies and Michael Blastland. Hope to see you there!

Beautiful Science is on display at The British Library until 26 May 2014, and is sponsored by Winton Capital Management. Entry is Free. Explore more images from the public health section of Beautiful Science on our Pinterest page!