On the 60th anniversary of Alexander Fleming’s death, in a two-part blog Boudewijn Dominicus investigates Fleming's prescient predictions about antibiotic resistance and what scientists are doing today to overcome it.

You’d think that an untidy desk is hardly the best place to start when trying to make a revolutionary medical discovery. But it was exactly that which led to Alexander Fleming, who died 60 years ago today, to discover penicillin1. On the morning of 28 September 1928, having returned from his summer holiday, Fleming was clearing away a mess of plates left out on his desk when he noticed a Petri dish contaminated by a blue-green mould (later found to be Pencillium notatum). This mould demonstrated a halo of antibacterial activity around it, destroying all the Staphylococcus bacterial colonies in its vicinity. 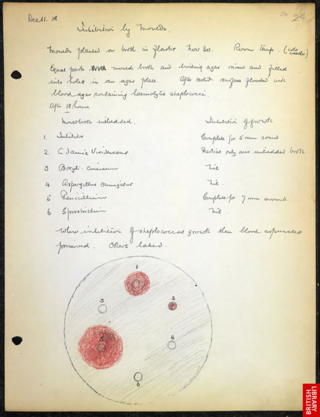 He isolated the mould’s active component, named it penicillin, and over the following few years investigated its remarkable potency and potential. By 1944 penicillin was ready for mass production, in large part due to the invaluable work carried out by Florey and Chain in isolating and purifying it2, heralding the start of the antibiotic revolution. Unfortunately it seems that this revolution may be coming to an end, as antibiotic resistance renders traditional antibiotics increasingly ineffective.

For someone whose laboratory and written work was so chaotic (researchers at the British Library have spent hours trying to make sense of his scrawled and scrambled notebooks), some of Fleming’s conclusions were remarkably forward-thinking. By the time industrial-scale antibiotic production became a reality, Fleming was already warning of the risks of antibiotic resistance. Indeed, in 1945 he gave a speech to the American Association of Penicillin Producers3 where he warned that misuse of penicillin would result in bacteria that "are educated to resist penicillin and a host of penicillin-fast organisms [will be] bred out which can be passed on to other individuals and perhaps from them to others until they reach someone who gets septicemia [infection in the blood stream] or a pneumonia which penicillin cannot save". So how exactly are bacteria ‘educated to resist’ antibiotics?

The Rise of Resistance

Such mutations can still confer a small advantage in the absence of manmade antibiotics – some bacteria produce antibacterial compounds to kill off competing species, and resistance genes allow these competing species to survive such an antibiotic attack. However, in nature this occurs on such a small scale that it doesn’t make the characteristic commonplace. Unfortunately, large-scale and indiscriminate human antibiotic usage has made this characteristic far more advantageous, making resistant strains significantly more prevalent than before. 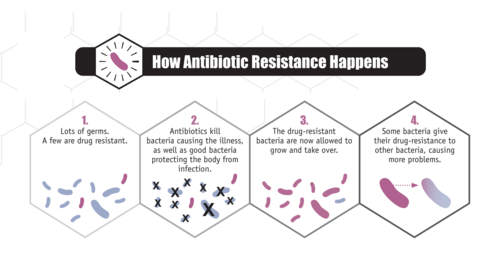 Herein lies one of the most important solutions to antibiotic resistance: reduce our excessive antibiotic usage and you reduce the selective pressure in favour of resistant strains.

This means cutting down on a culture of needless prescription. Viral infections like colds cannot be treated with antibiotics; a practice Fleming described as “a waste of [a doctor’s] time, a patient’s time and a waste of penicillin”. When antibiotics are required, we should use them in a targeted manner based on precise infection diagnoses, as promoted by the 2014 Longitude Prize. We also need to limit industrial scale usage in farming with up to 50% of antibiotics given to livestock, primarily to compensate for the crowded conditions commonly found in factory farms.

The ever-prescient Fleming took a hard line against abuses of his newly discovered medicine, writing in the New York Times in 19454 that “the thoughtless person playing with penicillin treatment is responsible for the death of the man who eventually succumbs to infection with the penicillin-resistant organism. I hope this evil can be averted.” Careful stewardship of antibiotic usage may just give scientists enough time to find new ways of 'averting the evil' of antibiotic resistance. Check out our next blog to find exactly how scientists across the globe are doing just that.

Posted by The Science Team at 1:14 PM