Julian Walker examines an unusual item included in the British Library's current Magna Carta exhibition and discusses what it might tell us about the infamous King John.

One of the last items to be put into the Magna Carta exhibition was the X-ray of King John’s teeth. Easy to miss, and perhaps something of an oddity, this item could also be read as a key item in the lead up to the agreement at Runnymede on 15th June 1215.

The story of how the X-ray and the teeth come to be in the exhibition – and the first time I can think of that a body part of a British monarch has been part of a British Library exhibition – goes back to the opening of King John’s tomb in Worcester Cathedral in 1797. The tomb was opened on the request of Valentine Green, an antiquarian and engraver, who had come to doubt that King John’s body was in fact laid within his tomb. The news of the opening attracted large numbers of sightseers, Green’s account reporting that thousands had come to watch; among these was a stationer’s apprentice, William Wood, who is credited with having taken two of the four remaining teeth from King John’s jawbone. The teeth were passed on to Worcester City Museum about 100 years later, where they have remained.

Green’s account of the teeth states that they were ‘quite perfect’, but perhaps we should think of this as a comparative assessment. By the end of the eighteenth century many people’s teeth were affected by decay, the massive increase in the importation and use of sugar during the century not being matched by increasing oral hygiene. This was the period when fashionable people wore ‘plumpers’, pads of cork or cloth in their cheeks to build up the contours of a face following tooth loss. In the thirteenth century there would have been little opportunity for John to get access to cane-sourced sugar, which only very gradually became available across Europe during the period of the crusades. Honey, the only other sweetener available at that time, though it contains fructose and glucose, also carries antibacterial agents which may act to counter some of the effects of the sugars; but honey may also cause caries[i]. Caries was certainly there during the thirteenth century, but perhaps less than might be expected given the lack of dental care[ii]. 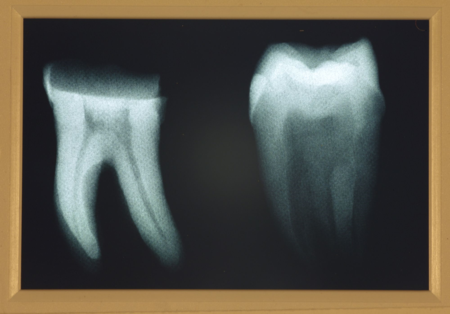 In 1998 I was engaged on a fine art project at Worcester Museum and Art Gallery, looking at the nature of touch, and persuaded the curator to let me get King John’s teeth X-rayed at a local dental practice.  I later took the X-ray to my own dentist with some questions – one of the teeth was flattened and I wanted to know how this could have happened. If it was caused by grinding did this show evidence of John having to eat gritty bread? Were his teeth ‘quite perfect’? What my dentist pointed out was that dietary effects would be shown on all the teeth; the fact that only one was flattened could only happen as a result of tooth-grinding, whose various forms are known as bruxism. Bruxism is very widespread, seldom severe enough to cause damage to the teeth, but is often related to anxiety and stress. The attritional bruxism in this tooth might have a number of causes: a particular jaw pattern, with one tooth being ground against its opposite, or the eruption of an individual tooth, or a particular diet (my dentist had seen it in cases where the diet included bones). In this situation, and as shown by the X-ray, the enamel and dentin are worn down, potentially exposing the pulp, which tends to shrink back allowing a thin layer of dentin and enamel to slowly build up; but the tooth would have been permanently hypersensitive, producing toothache, headache, possibly earache, and potentially restriction of the ability to open the mouth.

What we have no evidence for at this stage is when or why John started to grind his teeth; was the grinding the result of emerging wisdom teeth and dental crowding early on, and thus present through his adult life? And did he grind his teeth awake or asleep (there is some evidence for hereditary sleeping bruxism)? What we do have evidence for is a family trait that involved a tendency towards outbursts of violent rage in John’s father, Henry II (not just in the Thomas Becket crisis). Anger was a constant in these two kings; R V Turner proposes that the Pipe Rolls of Henry and John show the near-institutionalisation of anger in which the king ‘remitted his anger and indignation against individuals in return for money’[iii]. Crucially with Henry we see dental activity in the context of anger: he is said to have fallen to the floor in rage and chewed the rushes on hearing the King of Scots praised by one of his own men.

What we also have is evidence for John’s taste for soft foods. Though John, in keeping with the customary behaviour of Angevin kings, was by no means controlled in his sexual activity, he clearly exerted control of the sexual activity of others. The Oblate Roll for Christmas 1204 recorded that Joan ‘the wife of Hugh de Neville gives the Lord King 200 chickens in order that she might lie one night with her lord’. This kind of ‘fine’ or ‘tax’ to allow, defer or avoid something was common at the time, and was much used by John. What is interesting here is that the ‘fine’ or ‘tax’ is paid not in money but in the soft and easily chewed meat of the chicken. There is evidence elsewhere of John’s taste for both chicken and indeed eggs – his Christmas feast at Winchester in 1206 involved 1,500 chickens, 5,000 eggs, 20 oxen, 100 pigs, and 100 sheep. Were eggs special to John because they were soft? If John had a permanently sensitive tooth (at least one), and toothache, certainly towards the end of his life, this would have made him irritable, angry, quick to find solace in easy to eat foods (perhaps even those notorious peaches washed down by cider, which allegedly hastened his end).

As regards treatment for toothache, as well as bloodletting, cupping and herbal poultices, some effective painkillers were available – ice, mandrake, henbane, alcohol, and oil of cloves, though this last was fantastically expensive. Gilbert Anglicus, whose Compendium of Medicine was written about 25 years after the death of John, mentions oil of cloves as a treatment for toothache, but conflict at home and on the continent would have hampered its import and transportation. 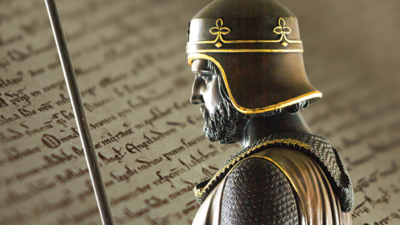 How much importance should we put on John’s tooth? Should we build his physical pain into our view of the circumstances that led to Magna Carta? Historiography of the physiology of movers and shakers has always been suspect. There is a perceived danger of reductivism in including Henry VIII’s leg ulcer in the factors leading to his increasingly autocratic reign, or evaluating among the factors leading to the outcome of the Battle of Waterloo Napoleon’s haemorrhoids, which prevented him from supervising the denouement of the battle on horseback. During schools’ workshops in the Magna Carta exhibition I ask students whether they feel King John’s dental distress should be considered as part of historical research and a factor in the story of the document. Mostly they think yes; teachers are less convinced, perhaps wary of the influence of Horrible Histories. I also ask students for suggestions for an exhibition souvenir for British Library shop; my favourite so far has been an eraser in the shape of one of King John’s teeth.

Julian Walker is an artist and writer; he leads workshops for schools and colleges for the British Library Learning Department. He is the author of How To Cure The Plague And Other Curious Remedies and The Finishing Touch - Cosmetics Through The Ages, both published by the British Library. www.julianwalker.net

Diet, nutrition and the prevention of dental diseases Paula Moynihan1, and Poul Erik Petersen2 1 WHO Collaborating Centre for Nutrition and Oral Health, School of Dental Sciences, University of Newcastle upon Tyne, Newcastle upon Tyne, UK: 2 WHO Collaborating Centre for Community Oral Health Programmes and Research, University of Copenhagen, Copenhagen, Denmark

Posted by The Science Team at 9:37 AM

Fascinating article, but the Julian Walker link goes to BL login rather than julianwalker.net

Thanks for pointing that out Andrew. We've just updated the link.

Interesting. Im a direct descendent of King John and also grind my teeth.