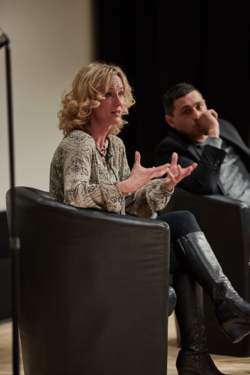 Towards the end of my PhD I was often asked by interested friends and family “So, what have you found out then?” I knew this question was innocent enough, but in the complexity of my project and the stress of trying to write up, I would often revert to something along the lines of “we had this nice idea, but in the end it didn’t quite work”. This was not the truth. I was distilling my results, removing the nuances of my research and giving an answer that was simpler, easier. Science rarely has definitive answers. Scientists spend their days finding evidence to support or disprove arguments and hypotheses within their fields. Uncertainty is accepted. Probabilities and error bars are scrutinised alongside results. But, when it comes to explaining a body of scientific work to a wider audience, this uncertainty is often left out. Evidence is simplified. Results and outcomes are over or understated in order to get a point across. But what harm does this do?

On Monday 28th September at the Sense About Science Annual Lecture, Tracey Brown gave a talk exploring just that; the difficulty of telling the whole ‘truth’ or challenging ‘truths’ in the public arena. As scientists or even as advocates of evidence, we can sometimes alter the evidential ‘truth’ in favour of a simplified explanation or an uncomplicated argument. However, in her talk, Tracey argued that evidence should be presented warts and all, including the uncertainty and unknowns that it can expose. “The Ugly Truth” explored the concept that the oversimplification of evidence and the lack of critical scrutiny of established claims, can be detrimental to public accountability and to the scientific community itself.

At the beginning of her lecture, Tracey Brown quoted Henning Mankell’s book ‘The White Lioness

“The truth is complicated, multi-faceted, contradictory. On the other hand, lies are black and white.”

This quote to me, sums up the messy nature of scientific ‘truths’. We do not live in a world of black and white, but one of endless shades of grey, where what we know as ‘true’ is constantly changing as science advances and technology evolves.

Tracey explored the many reasons that evidence can be overstated or uncertainties ignored. Often the truth can be difficult. If we look for instance at clinics offering miracle cures for cancer as Tracey did in her talk, we can see that the evidence for these ‘cures’ may be limited. In reality however, it is hard to question these ‘cures’ and destroy the hope they can provide. Other times it may appear in the public’s interest to simplify the evidence to make a point. This is often the case for many public health campaigns. Who cares about the evidence if the outcome is positive? For example the ‘5 A DAY’ campaign, where numbers touted may vary from country to country, but we can all agree that eating more fruit and vegetables is a good thing. And finally, it may be that a ‘fact’ or claim is so well established we don’t even think to question it, or put it under critical scrutiny. 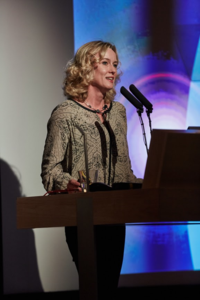 While these reasons can be compelling, they can become problematic. If uncertainty and accountability for evidence is not present at every level of public life, how can we introduce it in more nuanced scientific areas? By denying people the opportunity to understand scientific uncertainty, we can become trapped by our oversimplifications. We are left with the fear that uncertainty will be misused by critics and we begin to dread the question “But, are you sure?”

In the end Tracey’s argument comes down to mutual trust. The public needs to be trusted with uncertainty. As a scientific community we must be trustworthy and present the uncertainty that accompanies our work. We need to give the public the tools to ask for and demand evidence and accountability. There will be missteps and misunderstandings along the way. Opinion and motive will always find a way to clash with evidence. But by promoting the true nature of scientific evidence, people will be free to make fully informed decisions in a world where evidence and accountability cannot be ignored.

To listen to Tracey Brown’s talk in full (without any oversimplifications) visit the Guardian website or download the podcast here. To learn more about Sense About Science, or get involved in their Ask for Evidence campaign visit http://www.senseaboutscience.org/.

Sheena Cowell recently completed her PhD at Imperial College London in Medicinal Chemistry and Cancer Imaging. Sheena is a member of Voice of Young Science, a programme to encourage early career researchers to play an active role in public debates about science.Sense About Science is a charity that works with scientists and members of the public to change public debates and to equip people to make sense of science and evidence.

Posted by The Science Team at 3:43 PM