Science and Art in the rehearsal room

Ziggy Jacobs is Lighting Designer for Calculating Kindness, which is presented by Undercurrent and Camden People’s Theatre in partnership with the British Library. The production was researched using the papers of George R Price and W.D. Hamilton held at the British Library. George Price (1922-1975) was an evolutionary biologist who formulated the Price equation which is widely acknowledged as the mathematical explanation for the evolution of altruism.

Tell us a little about your usual creative process, and how this differs when working on a Science & Art project?

I specialize in the intersection between science, technology, art, maths, and performance – so a show like this is a gift, and it’s why I was contacted by Laura Farnworth (Director). 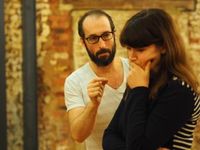 I don’t think of “art” and “science” as separate things at all, so I find exploratory processes in all fields immensely creative. There’s a flip side to that coin however, in that I find some performance and scientific work can be equally dry and un-creative, when they are not exploratory or experimental. I think we have become unfortunately stuck in a cycle of creating theatre lighting in a very limited way, working from what our existing tools can achieve. This breeds a kind of expected repertoire of pretty techniques which are applied over and over again, a lexicon of colour temperatures and shapes which are signifiers for a regular and dedicated audience of mostly other performance makers. 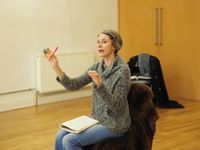 I wholeheartedly believe in beginning from scratch – asking what we want to achieve, what story are we telling, and thinking sky-high about what visual elements can support that, discussing them in initial meetings and devising sessions. During rehearsals, those ideas can be pared back to the achievable, and engineered from the ground up. It may require building an app, creating a new source of light, learning from the technology of completely disparate or unexpected industries, or engineering a brand new concept – and sometimes it needs a 2kW Fresnel and a good old fashioned profile fixture. The point is that I never know what the show needs, simple, complex, or unheard of, until I work within it, and I like it that way. I like to learn new skills, hone old ones, and start from total scratch each time – I think it’s the only way to inject innovation into performance tech. Lucy Sierra is an incredible designer to work with for this kind of process. We work in a very similar way – she doesn’t start outside or inside a box. There just isn’t a box to consider. It means that she comes up with these incredible visual images that I can bounce technological ideas off of, and every time we work together I am very proud of an original concept and execution that we create. How have you related the Price equation to your design?

I went through a number of ideas about how to relate the equation – from creating a “population” of sources that could demonstrate “fitness” and attrition in a live way every night, to a brain-world that reflected neurological activity through the light. In the end, we have decided to create a corner of George’s mind, where this story lives, and the lighting is related to the things that occupy this mind. The equation, and George’s mind, are reflected in an organized, angular way, but also have a natural and dynamic quality to their movement, a sort of spontaneous variable. The most important sources attached to the equation exist as they are, they do not make a judgement, or attempt to lead perception in a single direction – just like the equation doesn’t. They are neutral factors, their spread and activity is inevitable, fractal. 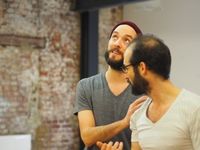 To an extent the individual sources are a population, and each one has had to survive the selection process; you will see clearly that the successful attributes and the “fittest” type of sources certainly demonstrate a covariance with their frequency in the population of lighting objects. If you view the entire lighting of the Camden People’s Theatre as a population of controllable sources, we have increased the figure dramatically – and the frequency of one type of source is drastically higher by the same amount. This can be seen as very much like genetic frequency; when the frequency of one gene (this type of source) increases in a population, the fitness of the population is covariant (the fitness of lighting objects in the theatre). Obviously they are not able to reproduce (although that could be an amazingly cost-effective idea!), but the concept is sort of beautifully similar!