In this post Sarah Evans outlines materials and resources available at the British Library that can be used to research social, political and cultural aspects of Britain in the 1980s

The events of the last two weeks have fuelled discussion about British society, politics and culture during the 1980s. Serendipitously, I was today browsing through the British Library Sounds website and came across this new oral history collection entitled ‘Observing the 1980s’  which features interviews with those involved in key events such as the Falklands War, the uprisings in Brixton and the Miners’ Strike, as well as on social issues such as unemployment and HIV. It brings together different voices from those who lived through the 1980s and is part of a project led by the University of Sussex, in collaboration with the British Library and the Mass Observation Archive.

As well as this collection, there are many others which offer insight into politics and life during the 1980s. Indeed, the recently launched website ‘Sisterhood and After’ includes extracts with women who were involved in the Greenham Common Women’s Peace Camp. For example, the below extract from Rebecca Johnson about the idea of ‘Embrace the Base’:

‘I don’t know who came up with the idea to call Embrace the Base but what came out of that idea of the action was, we were going to bring women to Greenham in their thousands.  We were going to do it on the anniversary of the NATO decision to put Cruise and Pershing into Europe and that was December 12th 1979, so we were going to do this on December 12th 1982 and that was a Sunday.  And having got loads of women to come to the camp we were going to invite as many as possible to stay and help us close the base so it was Embrace the Base on Sunday, Close the Base on Monday.  And this action began to kind of form in our minds as a way to bring women to see what’s going on, to see the sheer immensity of this nuclear base expansion ‘cos it had been a nuclear base for quite a while.’ 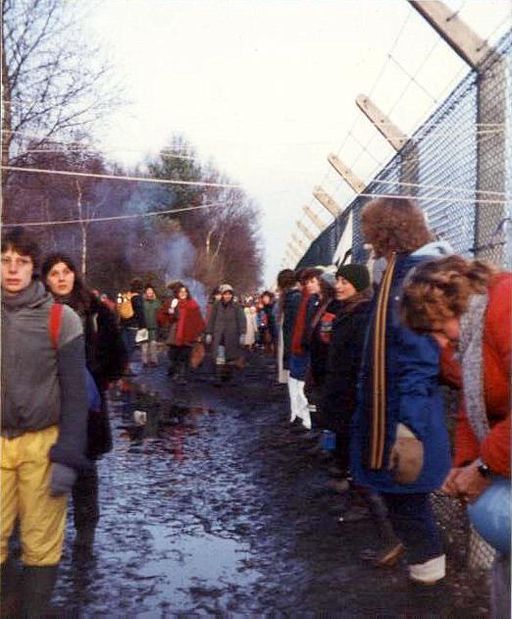 Embracing the base, Greenham Common December 1982, near to Greenham, West Berkshire, Great Britain. At noon on December 12th 1982, 30,000 women held hands around the 6 mile perimeter fence of the former USAF base, in protest against the UK government's decision to site American cruise missiles here. The installation went ahead but so did the protest - for 19 years women maintained their presence at the Greenham Common peace camp. This image was taken from the Geograph project collection. See this photograph's page on the Geograph website for the photographer's contact details. The copyright on this image is owned by ceridwen and is licensed for reuse under the Creative Commons Attribution-ShareAlike 2.0 license.

Alongside the oral history collections which document personal experience, the British Library sound collections include other kinds of recordings which will no doubt be of value to researchers in many different disciplines. For instance, the collections include recordings of speeches of the major political parties during the 1980s. Indeed, I have just found Margaret Thatcher’s speeches at the 1984 Conservative Party Conference in Brighton and the 1989 Conservative Party Conference in Blackpool.

Researchers of pop culture during the 1980s will be interested in the music recordings and pop videos which are held at the British Library. From The Specials singing Ghost Town to Kylie Minogue talking the audience through her favourite songs on BBC Radio One, the sound collections offer the opportunity to remember the events which fuelled musical responses or to be catapulted back to one’s younger self (I also just found ‘Smash Hits’ magazine in the main catalogue!).

Nearly three years ago my colleague Dr. Phil Hatfield and I organised, with a number of external partners, an event which brought together witnesses from the uprisings (sometimes called ‘riots’) of the early 1980s, alongside those who have subsequently undertaken research on what happened. The chair was Professor Gail Lewis and the speakers were Linda Bellos OBE, Wally Brown CBE, Kunle Olulode, Prof. Louis Kushnick OBE, Dr Anandi Ramamurthy and Sean Creighton. The podcast for this event is available on the British Library Website.

The recent political, cultural and public discussion about the impact and legacy of social change during the 1980s has certainly shown the need for researchers to be able to access a variety of materials relating to recent history. For those who remember the 1980s and for those who want to find out more, the British Library’s diverse collections are a good place to start.