Gert and Daisy on The Kitchen Front: Celebrity, humour and public opinion in the Second World War

Ian Cooke, co-curator of Propaganda: Power and Persuasion showcases some of the photographs and messages created by members of the public during the 'Write, Camera, Action!' days at the end of July. - See more at: http://britishlibrary.typepad.co.uk/socialscience/2013/08/write-camera-action.html#sthash.KM288701.dpuf

Ian Cooke, co-curator of 'Propaganda: Power and Persuasion' writes about how radio programmes such as 'The Kitchen Front' were used to communicate with the public about rationing and food-use during wartime.

In our exhibition, Propaganda: Power and Persuasion, you can hear an excerpt from the BBC radio programme The Kitchen Front. Broadcast on 20 December 1941, it features the characters Gert and Daisy, giving a recipe for mutton cooked as turkey (“murkey”).

The Kitchen Front was broadcast daily, following the 8am news bulletin, and was one of the BBC’s most-popular shows during the Second World War, with regular audiences of 5- 7 million. The programme was conceived as a means by which the Ministry of Food could communicate with the British public, explaining about rationing schemes, encouraging the use of foods which were more generally-available, and discouraging food waste. Additionally, the programme intended to boost morale, using humour and characters who were recognisable or familiar to the listening public.

Gert and Daisy were the creations of performers Elsie Waters and her sister Doris Ethel Waters. The characters were already popular before the War, having appeared at two Royal Variety performances in the 1920s and 1930s and releasing recordings of their sketches and songs. For two weeks in April 1940, Gert and Daisy performed Feed the Brute, a 5 minute programme broadcast at the end of the 6pm evening news, to give recipes and advice on food. The use of humour, and popular characters, was a huge success. 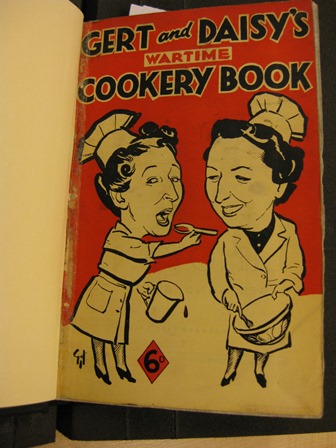 Public response to the April 1940 broadcasts were analysed by Mass Observation, who interviewed 300 listeners in London and Lancashire. The survey found that positive comments outweighed negative by 8 to 1, and that the information given on food was regarded as useful. Referring to the use of comedy in the broadcasts, Mass Observation concluded, ‘This experimental series was an undoubted success, and revealed a valuable new method of giving out serious educational instruction to millions of housewives’ – comparing this approach to more “high-brow” forms of delivery, the authors state, ‘Gert and Daisy knock spots off Professor Harlow’s Empire Crusade’. However, it wasn’t just the comedy and popularity of the characters, but also their apparent familiarity, that was seen as effective. The language used in their dialogue, and their working class London accents, made them identifiable to their target audience. The two criticisms of the programmes related to the perceived extravagance and complexity of the recipes (a complaint that would persist through The Kitchen Front broadcasts), and the timing of the programme. Many women commented that they were too busy to listen at this time in the evening.

Within two months, The Kitchen Front began broadcasting at the earlier time of 8.15am, following the news broadcast. Following on from the success of Feed the Brute, popular broadcasters and use of humour were the show’s staple ingredients. Alongside Gert and Daisy, series regulars included S P B Mais, Freddie Grisewood (best known for his later role as chair of the series Any Questions?), and Mabel Constanduros (performing as the Buggins family).

The popularity of the programme was marked by letters sent to the presenters, addressed both to the BBC and Ministry of Food, suggesting recipes and asking for more information. Recipe books from the series were published regularly, and included listener suggestions (described by S P B Mais as, ‘invitations to adventures in the unknown’). As well as broadcasts on the radio, demonstrations were held at schools, factories and other public places.

Throughout the war, the BBC remained active in evaluating the impact of all its broadcasts, and, as one of its most listened-to programmes, The Kitchen Front featured in many of its reports. As well as commissioning research from Mass Observation, public opinion was monitored through the BBC’s Listener Research Department. Listener Research was set up in 1936, using social research methods to develop reliable indicators of listener habits and preferences. As well as quantitative estimates of audience figures, qualitative methods were used to understand listener values and behaviours. Methods had much in common with Mass Observation, which was set up in 1937, and the Ministry of Information’s own Home Intelligence Division. At the start of the War, the Listener Research Department set about creating a cohort of 2,000 listeners who would be asked to complete monthly questionnaires. The questionnaires would ask about specific programmes and viewing habits, but also about attitudes relating to the war, and more general matters of personal taste. This information supplemented the daily interviews conducted with a changing sample of 800 members of the population, used to determine audience figures. 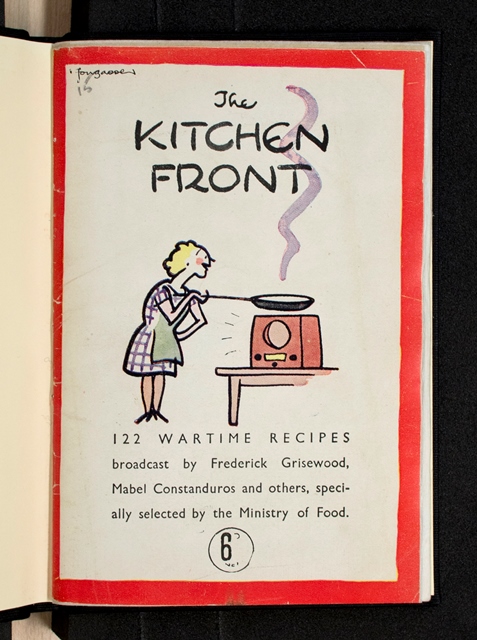 Above: The Kitchen Front - 122 Wartime Recipes

As the war continued research showed that, while audience numbers held up, the popularity of The Kitchen Front began to wane. BBC Listener Research in 1942 showed that 31% of those expressing an opinion thought that the quality of the programme had deteriorated. By 1943, the series was described as ‘going off’’. Reasons for the decline were uncertain, with the 1943 report suggesting that, ‘It may well be that the charge of declining quality is no more than a reflection of the housewife’s increasing weariness of the whole business of catering under wartime conditions’. A Home Intelligence Division report titled ‘Housewives’ attitudes towards Official Campaigns and Instructions’, dated 14 May 1943, suggested a similar problem for home propaganda more generally. The report argued, ‘housewives are now impervious to “the flood of official propaganda” and that they select from it only the information that seems essential to them.’ Cinema and radio faired better than other formats with posters and leaflets being seen by some at this time as, ‘a waste of paper’.

Radio broadcasting was seen as highly important in influencing opinion and behaviour in Britain during the Second World War, and became viewed as a more durable medium than print-based sources. The BBC was therefore of high strategic importance (its only competitors were enemy stations such as Radio Hamburg, broadcasting to Britain), and research on public opinion seen as vital in maintaining effectiveness and understanding what worked in gaining public support. The research methods developed and used by Mass Observation and the BBC’s own Listener Research Department became an essential tool in Britain’s war effort.

S.P.B. Mais. 1941. Calling again: My Kitchen Front talks with some results on the listener. British Library shelfmark: 7946.a.8

Dorothy Santer (ed.). 1944. The Kitchen Front: Recipes broadcast during 1942-43 by Frederick Grisewood, Mabel Constanduros and others, specially selected by the Ministry of Food. British Library shelfmark: 7948.a.16