In the second part of this guest post Alex Giles from City University, London, investigates stories from the empire from a socio-legal perspective, through researching Privy Council cases 1917-1920. 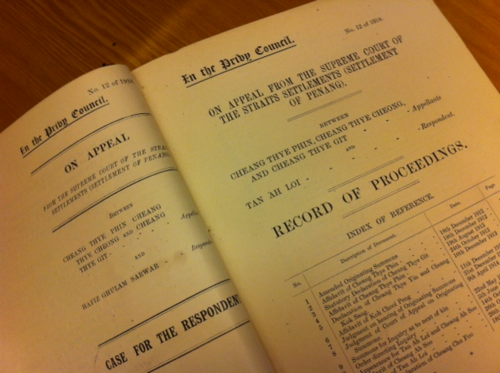 Record of proceedings in courts below in a Judicial Committee appeal case. (BL pp1316). Copyright British Library Board.

The first part of Alex's blog can be found here

The Privy Council cases can also give an alternative angle on important moments in history. For example in the set for 1920 there are some interesting cases around the unrest in the Punjab in  March and April 1919 relating to the so-called Rowlatt Acts; leading to the infamous Jallianwala Bagh Massacre by the British Army in Amritsar on 13th April1.  One such case is  Bugga2; ostensibly reaching the Privy Council  because of a legal challenge to the retrospective nature of martial law regulations passed as a consequence of the above Acts, but more interesting as a primary resource material relating in detail some of the riots that led to the Massacre.

The case describes through the witness statements, confessions, charge sheets and police depositions, how a mob (some of whom are the Appellants in the case) run riot through the city of Amritsar leading to twenty of them being sentenced to death, and one to life imprisonment (for looting).

They attacked private and public buildings in Amritsar including the burning down of the local National Bank of India and murdering the bank manager and his assistant.  The whole event is described vividly through witness statements:

“I saw boy ringing and ringing bell, calling on people to close shops and get sticks and go to station…saw Muhammadi, whom I knew before, break window. I remonstrated with him, and another man I didn’t know said ‘Burn’. Another man came with oil…”

“‘We found Sahib [the Bank Manager] standing at his table with a pistol in his hand. The mob fell on the Sahib with dangs and he fell down from the blows. The Sahib did not fire his pistol at all…the pistol fell from his hand and I picked it up. Exhibit P 1 is the pistol in question….’ thumbmark of the Accused”

Some of the men claim their confessions are false “made under Police pressure and threats” or “extorted by the Police through torture”, others blame the “Muhammedans” or that “my brother had a quarrel with the Constable”.  None of those sentenced appeared before an ordinary Indian criminal court – despite them still sitting during this period of martial law.

Another character in the Punjab at the time is Kali Nath Roy3, freedom fighter and editor of The Tribune, then published in Lahore. He is tried for sedition, and his case4 covering this period of March/April 1919, is a gold mine. Numerous articles from his newspaper campaign against the Rowlatt Acts, and his reports of the subsequent riots and the ill-treatment of those accused (including mention of the Bugga case above), are extensively reproduced within the case file to the Privy Council in an effort to illustrate the extent of his “indefensible language”:

“The masses of India are no fools. They are as intelligent as the masses in any other country; more intelligent perhaps…they know what is what…No man who saw the behaviour of the crowds – at once the picture of manliness and dignity – will ever doubt the supreme fitness of the country to enjoy the priceless and inalienable right of constitutional liberty. The Rowlatt Act must become a dead letter…” Tribune 8th April 1919

The judgment at Roy’s court martial points out “how soon after the appearance of these articles the serious outbreak took place in Amritsar”. Not only can we read his reports of Gandhi’s and Swani Shradhanada’s5 stirring speeches and actions, but we can also see Roy’s response to them  and his own justification (or defence) in his witness statement:

“I have always and uniformly condemned disorderliness and resort to physical force, not only as unjustifiable in themselves, but as futile, murderous and suicidal”.

When Gandhi is arrested Roy  points out that he is writing “ in the most unequivocal terms against any feeling of resentment or indignation and the need of strictly following the spirit of Mr Gandhi’s precept – that of absolutely eschewing violence”. He also explains that The Tribune is published in English and - far from being a rabble-rousing rag - is a respected publication: “the organ of the educated classes of the Province, a large number of its subscribers being Government officials”.

There are some lovely gems in the exhibits of the case too – such as the telegrams; one from the moderate Surendra Nath Bannerjee, Chief Secretary to the Punjab Government and former Indian National Congress president,  pleading for better treatment of Roy, and another from Shradhanada to him at The Tribune on April 11th:

“Just received wire from Bombay. Mahatma Gandhi released today. He regrets loss of life, counsels restraint and avoiding violence. I, too, strongly urge calm restraint…God and truth guide you all.”

Roy’s appeal to the final court of the British Empire against his two year sentence fails, despite his belief that supporting “constitutional agitation for the removal of Indian grievances” was his “legitimate duty”. However by the end of the year, along with others, he does in fact receive a Royal Pardon5; something intimated (but not explicit)in the final judgment. So his comment below is not as ironic as perhaps originally intended:

“The right of passive resistance is an acknowledged human, as distinguished from merely national, right; it is one of those rights which spring from the very fact that man is a rational, a conscientious, a self-determining being. And in no part of the world is this right more valued than in England”.  The Tribune 6th March 1919

Volumes from this collection can be requested from shelf mark PP1316 for use in the Social Science Reading Room. For guidance on ordering and further information see the British Library web page Privy Council Appeal Cases.

Alex Giles LLB, studied law at Sheffield University, and the College of Law. He currently works for City University London in their City Law School libraries.