During the months leading up to the Scottish Independence Referendum, The British Library participated in a Web Archiving project to reflect the debate in Scotland and across the UK. This project was led by the National Library of Scotland. In this guest post, Amy Todman, Referendum Curator at the NLS, explains more about Collecting the Referendum.

The Scottish Independence Referendum was a hugely significant international event that captured the world’s attention. Questions raised by the Referendum, on all sides of the debate, have cut across Scotland’s cultural, social, intellectual and political life. The National Library of Scotland has been at the heart of this event, collecting material in a wide variety of formats in order to preserve its material record for future generations.

Collecting the Referendum is a library-wide project, developed as a response to the complexity of issues related to September’s constitutional debate, and at the behest of the Scottish Government. It aims to produce and make accessible an un-biased, representative and comprehensive collection. We aim to capture the rich cultural and artistic legacy of the Referendum as well as what might be considered the more obviously political. The collection now includes material from a growing number of campaign groups from ‘Leith says Aye’ and ‘Academics Together’ to ‘Women for Independence’ and ‘Conservative Friends of the Union’.

Raising public awareness of our collecting activity is important and is being explored through various channels, both online and by face-to-face engagement. Our project web page encourages donations and also highlights the role of other collecting organisations, with whom we are exploring the development of referendum collections over the coming months and years.

Web archiving is an important element of collecting a contemporary national debate. We have been working in collaboration with the British Library and the Bodleian Library at Oxford University to create an archive that reflects that debate. The web archive collection contains more than 1,000 blogs, campaign sites, news pages, contributions from think tanks, trade unions, churches and arts organisations, as well as twitter feeds from Members of the Scottish Parliament. Online material is collected under Legal Deposit regulations, and, when complete, will be accessible in the reading rooms of the National Library of Scotland, British Library, Bodleian and other UK Legal Deposit Libraries.

At the NLS, Collecting the Referendum is part of a wider development to expand capabilities for managing the challenges of cross-format and hybrid collections. As such it includes material in a wide variety of formats: publications in print and digital, analogue and born-digital archives and records, moving image and sound, as well as websites and social media streams. Ephemeral material such as leaflets and flyers are included as well as monographs, serials and newspapers, official publications, reports from a wide range of think tanks and research institutes, and moving image, in partnership with the Scottish Screen Archive. visitors to the first Collecting the Referendum open day. Image used with permission of the National Library of Scotland.

Building relationships is key to developing the collection. To support this, the NLS held two public referendum open days, in July and August 2014, giving us an opportunity to raise awareness of the Referendum collection and build on its positive relationships with campaign groups, political parties and individuals involved in the debate.

The first open day was structured around the main Scottish political parties and their differing responses to the referendum debate. Representatives from Scottish Labour, Scottish Liberal Democrats, Scottish Conservatives, Scottish Greens, Scottish Socialist Party and the Scottish National Party were invited to NLS to engage with the Collecting the Referendum project and discuss issues related to the referendum with readers, NLS staff and members of the public.

As well as these representatives, there were several displays of material from NLS collections. These included ephemeral material and official publications from the developing referendum collection as well as historic materials from the rare books collections to put these more recent items within a wider context. 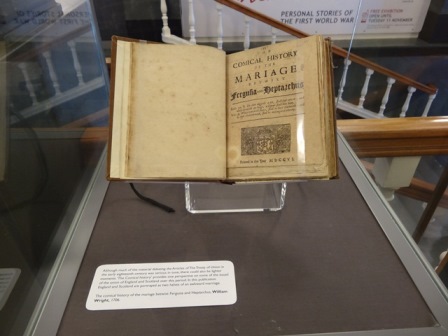 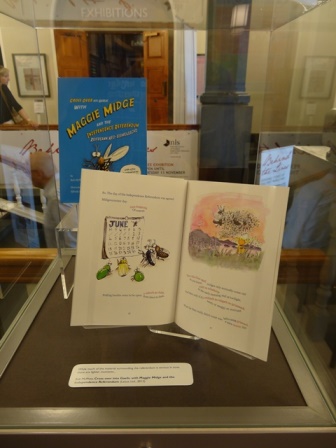 Items on display at the first open day, NLS. Images used with permission of the National Library of Scotland.

NLS web archivist Eilidh took part in the event, using her knowledge of the web archiving aspect of the referendum collection to engage with the public about the collection. As well as discussing the web collection with staff, participants of the open day, and the public, Eilidh also talked through the Library’s approach to collecting the web and the practicalities of researching the new collection.

The second open day followed a similar format to the first, although this event focussed on campaigning groups rather than political parties. Again, six groups were invited, two each from the yes and no sides of the debate, and two neutral organisations.

While the political parties, perhaps by chance, had arranged themselves by their respective positions on the vote, with the yes’s on one side and the no’s on the other, the campaign groups chose differently. As on the first day, each group claimed a table and arranged their campaign literature on it. Here though, groups from the ‘no’ side chose to sit alongside those from ‘yes’, across and in-between those that were neutral. There was no attempt to separate out along the lines of the debate and those who attended could talk easily to campaigners from either side. A particular group of undecided voters, in their mid-20s, worked their way around every group, debating and discussing with all. We also welcomed back several of our former representatives from the first open day who were keen to continue conversations begun the month before.

Mirroring the richness of our growing collection of ephemeral referendum materials, the open day highlighted the diversity and activity of sectoral campaign groups. Women for Independence and National Collective were asked to attend, along with Academics Together and Women Together. Future of the UK and Scotland (an ESRC funded research group) and a well-established group local to Edinburgh, Open Democracy were also approached, providing an important neutral voice.

Displays highlighted the archival aspect of the referendum collection, including materials from previous Scottish home rule and independence campaigns. Items included printed ephemera (like leaflets and flyers) but extended to unpublished material such as handwritten campaign diaries, press releases and digital correspondence.

Eilidh returned to lend her expertise, this time preparing a short text to introduce web archiving to the public, complementing her verbal explanations and demonstrations. Diane Milligan (NLS Digital Assets Team) was also able to participate in this event and was on hand to discuss the ins and outs of collecting digital material. 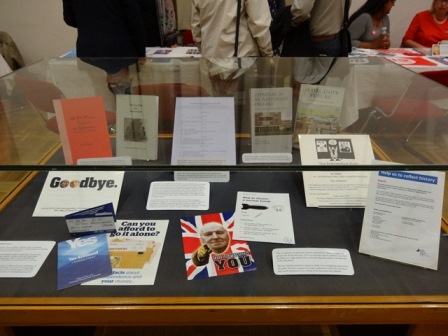 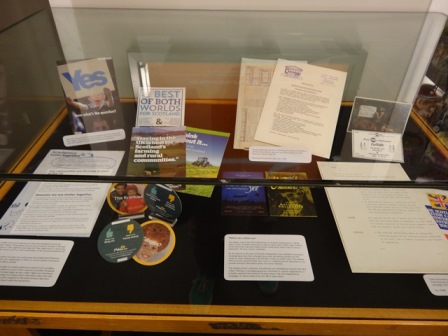 Pamphlets and other ephemera on display at the second Collecting the Referendum open day, NLS. Images used with permission of the National Library of Scotland.

During the open days myself and other staff members were available to talk with representatives and members of the public about the referendum collection and to explain the significance of their individual contributions. It was useful to show people the kind of leaflets and flyers that we want for the collection, and how these fit into a wider historical context. Our appeal for donations from the public was also assisted by press attention resulting in a broadcast on STV.

Artist and co-community designer Dr Priscilla Cheung-Nainby also participated in the day’s events. Priscilla has worked on referendum-related issues in a variety of venues and contexts, exploring creatively with communities some of the ways that a ‘yes’, or a ‘no’ vote might practically affect our everyday lives. We worked together to produce a simple framework for engaging with issues around the referendum. Priscilla’s intervention provided a gentle way of holding conversations about the issues around the referendum, and offered our visitors a place to step back from the campaign groups and to reflect on how they felt about the forthcoming vote. 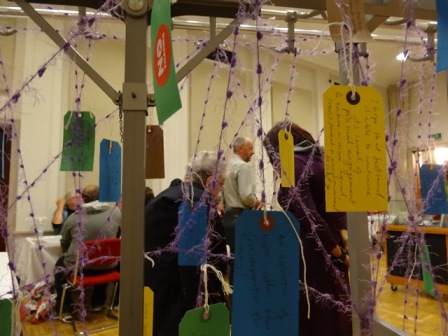 Indeed, such relatively small-scale community engagements with the referendum are an important part of the developing collection, representing some of the many facets of discussion that might otherwise be less easy to capture.

Developing an unbiased Referendum collection that will be useful to future generations of researchers requires pro-active work and collaboration in order to respond quickly and flexibly to what is undoubtedly an extremely significant event in Scotland’s history.