Discover more about the British Library's 6 million sound recordings and the access we provide to thousands of moving images. Comments and feedback are welcomed. Read more

The new content strategy from the British Library, Enabling Access for Everyone, includes a section on COVID-19, showing how different collecting sections of the Library have responded to the pandemic. Listed among what we have collected are radio broadcasts from some sixty stations, national and regional. This is the first public report on the progress of a pilot project that officially began operations at the start of 2020, entitled National Radio Archive

The National Radio Archive pilot is part of the British Library’s Save our Sounds programme. Scheduled to run over two years, its aim is to create a digital radio archive which will preserve a representative proportion of ongoing UK radio output and make this available for research. This intervention was needed because most UK radio output was not being preserved long-term or was inaccessible for research and education. We estimate that of around 3 million hours of radio broadcast in the UK each year from 700 stations, some 92% is not being properly preserved, with only 2% being made available for potential research post-transmission. These are sounds that need saving.

In particular, we were keen to preserve some of the output of regional or community stations, whose local engagement has proven to be so vital over this traumatic year.

The pilot is exactly that - a trial service to test the parameters and capabilities of such a resource. We have gone down the route of off-air recordings; that is, recording programmes at the point of broadcast. We are capturing these from a maximum of fifty channels at any one time (some on a near-continuous basis, others on a sampling basis), taken from different broadcast streams (DAB, DVB, IP streams). The descriptive metadata likewise comes from a variety of sources: embedded in the digital signal, acquired via special arrangement with Radioplayer or added manually.

We are generating automatic speech-to-text transcriptions for a proportion of the programmes, one of the goals being to see how well such software performs on a large scale, with a rapid turnaround from capture to access, and with multiple accents.

The operation is complicated. We are still working out the best models for the selection, capture and description of the programmes. Nevertheless, at the end of the first year we have recorded over 130,000 programmes (ahead of our target of 100,000) from sixty-four stations. A list of the stations from which we have recorded is given below. It should be noted that for most stations we have only recorded selected programmes (stations we record in their entirety or nearly so include LBC, talkRadio and Times Radio).

There is no access to the National Radio Archive as yet, and when this has been developed it will be almost exclusively onsite access only, in British Library reading rooms. However, we are keen to start working with researchers who may find such a resource useful, so please do get in touch (email us at radio@bl.uk).

Further blog posts will follow, covering particular aspects of our pilot archive, including COVID-19, #BlackLivesMatter and the US presidential election.

For more information please visit the project page for the National Radio Archive.

(Note that for most stations we take sample programmes, not their entire broadcast output)

Posted by Luke McKernan at 1:53 PM

The British Library’s Sound Archive plays host to an extensive collection of recordings of English accents and dialects. They’re a great resource for academic linguists, school teachers and their students alike, as well as learners of English as a foreign language.

But on a personal note, when listening to them they do hold a certain joy. They invite you to consider why you say certain words, certain phrases. Raising questions like – what influences did your family, or hometown have on you? Do you have certain words that none of your friends use?

As today is St Andrew’s Day, I’ve been reflecting on what influence my Scottish relatives in the Highlands have had on the vocabulary I use. From the obvious: neeps and tatties – which were a staple part of my diet growing up. To the more playful (or insulting, depending on how you look at it): skinny-marrink to describe my childhood twig-like appearance.

And this influence can extend to the tips of your toes. What do you wear on your feet when you’re at home? Nothing? Socks? Shoes? – Or perhaps, like this anonymous speaker – baffies?

This term for slippers is thought to originate in the east coast of Scotland, in particular from Fife and Perthshire. 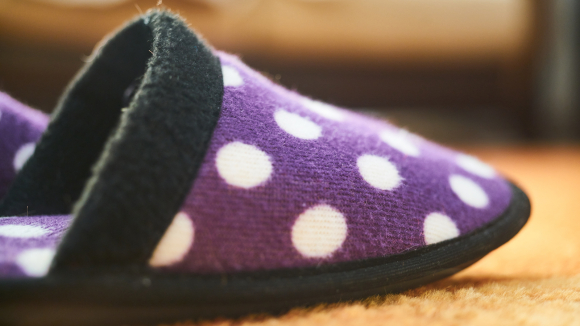 The speaker in this clip hits on why we may choose to extend beyond Standard English – for the feeling of it! They describe the term baffies as having a warm, cosy feeling to it which is exactly the purpose to wearing a pair of slippers: to keep your toes toasty.

This recording comes from the Evolving English: VoiceBank, which is a celebration of English accents worldwide. The collection, created between November 2010 and April 2011 by visitors to the British Library exhibition ‘Evolving English: One Language, Many Voices’, includes contributors of all ages and embraces varieties of English in the UK and overseas including non-native speakers.

Discover more familial words like baffies, wibbles or nautica on the British Library’s If Homes Had Ears website.

Posted by Andrea Zarza Canova at 7:00 AM

In 1978, Roger Waldron was staying at an elephant camp in Chitwan, Nepal. One night, two musicians emerged from the darkness and began to play. 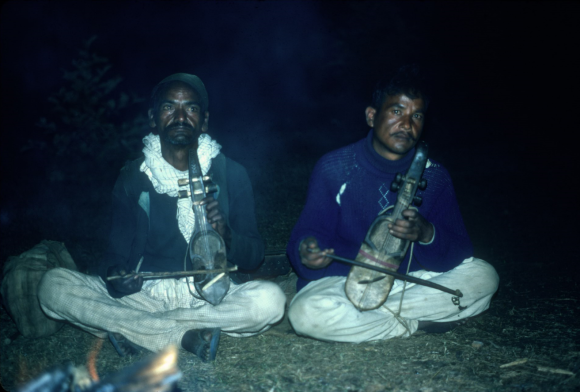 The two unnamed musicians, photographed by Roger Waldron on 23 November 1978

Without a translator Mr. Waldron was unable to understand the meaning of the words the musicians sang. However, he was able to record three of the Nepali folk songs they performed, and later donated the resulting collection to the British Library. The recordings have recently been cleared for online access as part of Unlocking Our Sound Heritage, and in this blog, you can listen to a few highlights.

The first excerpt features a folk song in the Nepali language, performed by the two Gaine musicians singing in octaves, accompanied by the Nepali sarangi, and a rattle with metal bells. The sarangi is a stringed instrument used throughout South Asia, including by the Gaine (or Gandarbha) of central Nepal who are known for their music making and distinctive folk songs.

In this second excerpt, a different song can be heard, accompanied once again on the sarangi.

Although the sarangi is typically made of wood, with strings played using a bow, the musicians in these recordings create a range of sounds and effects to accompany their songs, including using metal bells, which in the third excerpt (above) are attached to the bow to mark the rhythm of the melody.

Most of the recordings I work with don’t come with photographs taken in situ, so it is a rare privilege to be able to see and appreciate the musicians and their work in this way. I would love to know what the songs are about, and whether they are still performed today.

I am incredibly grateful both to the musicians and to Roger Waldron for making this post possible, and for enabling us to share the performances with new audiences. You can learn more about these three recordings by reading their corresponding catalogue entries on the Sound and Moving Image catalogue.

Posted by Andrea Zarza Canova at 7:00 AM