Many requests have been received from researchers wanting to hear these Wilhelmj cylinder recordings from the end of the nineteenth century and they are now available worldwide through The British Library’s Archival Sound Recordings website.

The donor of the recordings stated in 2005 that these are possibly by the violinist August Emil Daniel Ferdinand Viktor Wilhelmj (1845-1908).  They were originally in the possession of Charles Volkert, director of the London branch of the music publishing firm Schott who died in 1934.  Circumstantial evidence points to them being by Wilhelmj: firstly, his compositions were published in London by Schott.  Secondly, in 1894 he accepted a teaching post at London’s Guildhall School of Music, so he was certainly in London, and no doubt at the offices of his publisher.

These recordings were made well after Wilhelmj’s prime.  Henry C. Lahee wrote in his Famous Violinists of To-day and Yesterday published in 1902:

‘Neither his character nor his playing was of such a nature as to appeal to the great mass of people in the way in which Remenyi and Ole Bull won their hearts.  Wilhelmj was massive in person and in tone.  He stood for dignity in his actions, appearance, and playing, and was honoured by the more cultivated and educated portion of the people.  He is regarded by musicians as one of the greatest violinists who ever visited America…’

‘Unfortunately, his powers have been on the wane for some years past, but though the days of his public performances are past, he is known as a most patient and painstaking teacher.’

The Shadow of Paganini

The recordings are on brown wax cylinders, privately made on an early phonograph in the late 1890s or early 1900s.  The condition of the cylinders varies, but some are in excellent condition.  There are sixteen in total and unusually, long works were recorded over four or more cylinders.  The first cylinder of Paganini’s Violin Concerto No. 1 is missing, but the remaining four contain the majority of the first movement of this work with piano accompaniment.  Probably the most important recording is of an unpublished violin concerto by Camillo Sivori (1815-1894).  Wilhelmj plays the first movement of what is probably the Violin Concerto No. 2 in A written around 1841.

The recording, played at a similar speed to the others sounds in A, and the only other concerto by Sivori listed in Grove is in E flat.  Wilhelmj almost certainly would have met Sivori who toured extensively throughout the world.  Sivori was also a pupil of Paganini in the early 1820s and three of the cylinders contain ‘Witches’ Dance’ (La Streghe Op. 8) by Paganini.  On the label is written, ‘The Witch’s Dance, - a Song of the Old Woman under the Walnut Tree, as played by Paganini.  During the dark ages, the Walnut Tree was believed to be the trysting place of witches.  Hence the Old Woman’s Song.’ 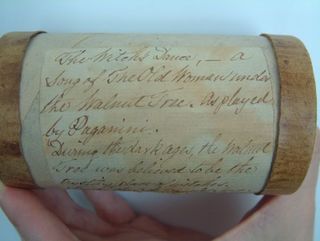 August Emil Daniel Ferdinand Viktor Wilhelmj was born on the 21st September 1845 in Usingen, Germany.  His first studies, at the age of four, were with Konrad Fischer, a violinist in Wiesbaden.  He first appeared in public in January 1854, was sent to Liszt who sent him to Ferdinand David in Leipzig in 1861 exclaiming, “Let me present to you the future Paganini.  Look well to him!”  From 1865 Wilhelmj toured Europe and Russia.  In the early 1870s he toured England with the singer Charles Santley.  In 1876 Wilhelmj led the first violins at the Bayreuth Festival and the following year invited Wagner to England where he again led the first violins at two concerts at the Albert Hall conducted by Wagner.

Between 1878 and 1882 Wilhelmj toured North and South America, Australia and Asia, remaining in Russia for some time in 1882.  On his return to Germany he founded a school of violin playing at Wiesbaden but this was not a success. In 1885 he was invited to play for the Sultan of Turkey who gave him the Order of the Medjidie (second class) and presented him with some diamonds.  Wilhelmj retired from public appearances and settled near Dresden.  From 1894, when he married Marcella Mausch-Jerret of Dresden, a distinguished pianist, he was professor of violin at the Guildhall School of Music in London.

Classical music, Recording of the week

Woah. Have you ever visited the whilhelmiaj's museum and carefully searched the repertoire he was playing during that time in London?
Many violinists's works were published by schott during that period in London.
No Germán violinist of that time, maybe because of Joachim's influence and or because the musical aesthetics of the time had changed, would had been remotely interested in paganinis music, needless to say record it. Oh ave you. Onsidered that maybe a person directly related to Paganini or some type of compatriot violinist would had been more interested in the preservation of such playing style, loaded with musical onomatopeyas and parlando technique. Whilhelmiahj was not known by neither of those playing techniques, needless to say remotely versed in the art of Paganini, as to lable the cylinder as "as played by Paganini."
There were just a few violinists trained to perform Paganinis' compositions during that time, these violinists were regarded as "charlatans" by both the English and the Germans. Whilhelmiaj was a sad alcoholic, a crook who swindled his rich students with fake Presendas violins, and he was also performing a limited repertoire, like the Wagnerian arrangement of Albumleaf and his own mediocre compositions.
Anyhow, hope you get to find out who really made these recordings...however Whilhelmiaj was not.