To celebrate World Listening Day, the World and Traditional Music section has made available, to listeners in British Library Reading Rooms, a collection of field recordings from five European villages, which form part of the World Soundscape Project Collection. These recordings can be located in the Sound and Moving Image catalogue between call numbers C1064/6 and C1064/42.

The World Soundscape Project (WSP) was a small group of researchers and composers dedicated to studying the acoustic environment. It was based at Simon Fraser University in Vancouver, Canada, and led by Raymond Murray Schafer (his birthday, July 18th, was chosen to celebrate World Listening Day). The WSP took an inter-disciplinary approach to the environment, integrating, amongst other things, acoustics, architecture, music theory, sociology, anthropology, linguistics and history. This allowed for analysis of the acoustic environment in all its complexity. The research became the basis of ‘Acoustic Ecology’, a discipline that R. Murray Schafer developed to further investigate ‘soundscapes’, which are understood as the sonic interface between living beings and their environment. 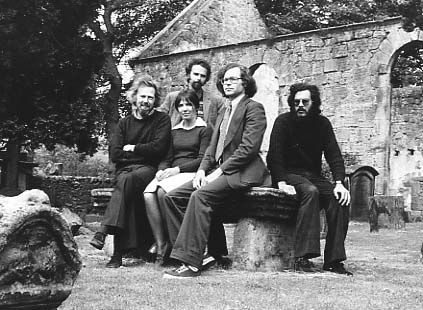 The World Soundscape Project’s first fieldwork was carried out in the immediate surroundings of Vancouver and released in 1973 by Ensemble Productions Ltd. These recordings can be listened to in the British Library Reading Rooms on a two-disc publication entitled The Vancouver Soundscape  which was re-issued ﻿﻿﻿with additional tracks in 1996 by Cambridge Street Records . 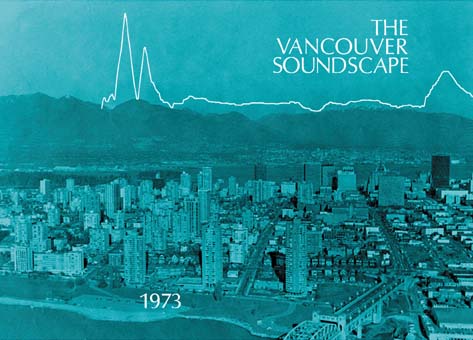 Shortly after recording the Vancouver soundscape, the group embarked on a cross-Canada tour to document their national soundscape. The recordings formed the basis of a radio series, Soundscapes of Canada, first presented on CBC-FM Ideas in 1974. They are also available in British Library Reading Rooms. These radio programmes had an educational slant to them, which reflects a strong concern of the WSP with raising awareness of the importance of listening. The programmes were designed to interest listeners in their immediate auditory environment with the ultimate hope of involving them as active participants in building a more balanced soundscape.

In 1975, members of the World Soundscape Project (Peter Huse, Jean Reed, Howard Broomfield, Bruce Davis, and R. Murray Schafer), travelled through Northern Europe by Volkswagen bus with the initial idea of comparing the soundscape of Canada with those of selected European villages. They wanted to document the sonic patterns of village life and so they chose villages with the following criteria in mind: “First of all, we hoped it would be off a main road, that it would be self-contained and not contiguous with other settlements, that its buildings would be fairly closely grouped so that the sound making activities of the village would constitute the largest events in the quiet countryside beyond, that the village would have a strong and cohesive social life – but not so cohesive as to resist curious intruders like ourselves – that it would have a few acoustic signals of distinction, a few unusual vernacular sounds, some good ambiances to record in, and a native speaker who knew both the regional dialect and spoke fluent English” (Five Village Soundscapes, 1977, p. 2, DOC0002179). Speaking a common language with local residents allowed the WSP’s members to conduct interviews with them about their experiences of the soundscape, and to then contrast these subjective experiences with the ‘objective’ measurements they were making. These measurements were not only in the form of sound recordings: isobel maps, morphology charts, and maps notating pitches and source of predominant hums, to name a few, were also used as a means of analyzing the soundscape. These records, along with further research on each village, can be found in a book entitled Five Village Soundscapes, also available at the British Library. This publication reveals the pioneering methodologies being used in fieldwork by the WSP. 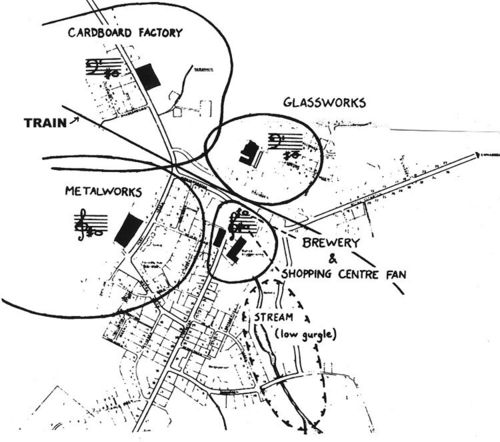 Pitches of predominant hums heard in Skruv, originating from the factories and the shopping centre.

Here is an excerpt from 'Skruv, Sweden Feb 18/75' (C1064/8) in which you can hear a conversation with residents in Skruv, the first European village the WSP visited:

Also recorded in Sweden are these church bells ringing in the old town of Stockholm to announce the beginning of Sunday service at Storkyrkan on 16 February 1975 (extracted from 'Stockholm, Sweden Feb 14, 16/75', C1064/7). You can hear the sound recordist move into the reverberant atmosphere of the church where the tolling of the bells remains audible.

During their time in Europe, the World Soundscape Project members were asked by R. Murray Schafer to keep a sound diary. This was yet another way of creating a record of their impressions of the sound events they were experiencing: “A sound diary has no ending for listening continues throughout life, perhaps more vigilantly for the experience of writing about it” (The European Sound Diary, 1977, p. 79, DOC 0002178). This published selection of their diary entries is also available in the British Library’s Reading Rooms. In it you can also read 'London Soundwalk', which maps out a walk through sonically interesting environments in London. The soundwalk begins close to the British Library, at the Friends House on Euston Road, inviting listeners to experience the importance of silence in Quaker worship.

Another complement to the sound recordings is the metadata: the description of each recording, which you can read in the catalogue entries. It was created by the recordists whilst in the field and prepared as a catalogue by Hildegard Westerkamp and Bruce Davis for the World Soundscape Project Tape Library at Simon Fraser University where the original reel-to-reel tapes are archived. The British Library’s catalogue entries are transcriptions of this catalogue and they provide important contextual information about the recordings whilst also conveying the recordists’ attitudes towards the sound events. These descriptions have a sonority of their own and add an important layer of meaning to the recordings. R. Murray Schafer asks: “Can descriptions of sounds ever be adequate to their original stimulations? Probably not, although with a great writer they may serve to evoke reverberations in the imagination” (The European Sound Diary, 1977, p. 81, DOC 0002178).

After visiting Skruv in southern Sweden, they travelled to Bissingen in southern Germany, an agricultural village moving towards industrial life. This extract from 'Bissingen, Germany March 6/75' (C1064/15) allows us to hear the rhythmic qualities of a blacksmith labouring.

Further ahead in this recording, you can hear the blacksmith speaking about the sound of horse and ox carts leaving every morning for the fields. This is a sound that disappeared around the late 1950s when farmers began using motor vehicles. This quote from Jean Reed’s diary points towards how memory can preserve sounds: “Today the buoy at Le Ster is moaning constantly. I wonder how the people here like it. I find it strangely comforting. It has nothing to do with me, but I find myself listening to it and trying to store up its haunting sound in my memory forever” (The European Sound Diary, 1977, p. 58, DOC 0002178). The buoy she writes about is located in the small fishing village of Lesconil, France, where the fish auction you can hear in an extract from 'Nogent-Le-Retrou, France April 10/75' (C1064/31) took place in April 1975.

The WSP acknowledged the importance of documenting ‘disappearing’ or ‘antique’ sounds without disregarding the new sounds in their contemporary soundscape. Moozak, electricity hums, ring and telephone tones, radio and PA systems are heavily featured in the recordings. R. Murray Schafer conceptualized the splitting of sound from source, made possible by modern technology, with the term ‘schizophonia’. The following quote, describing the soundscape of the medieval village of Cembra, Italy, relates to this idea: “The windows of an Italian village seem always to be open. They are like a radio, tuning in on the happenings of the world, eavesdropping in the literal sense. They are like telephones, for often one hears women talking across the roofs of the town between airing bedding, shaking mops, and supervising children playing in the streets” (Five Village Soundscapes, 1977, p. 17, DOC 0002179).

In the following extract, from 'Cembra, Italy April 1,2/75' (C1064/28) you can hear a vehicle driving through Cembra with an attached P.A. system through which it announces laundry services: 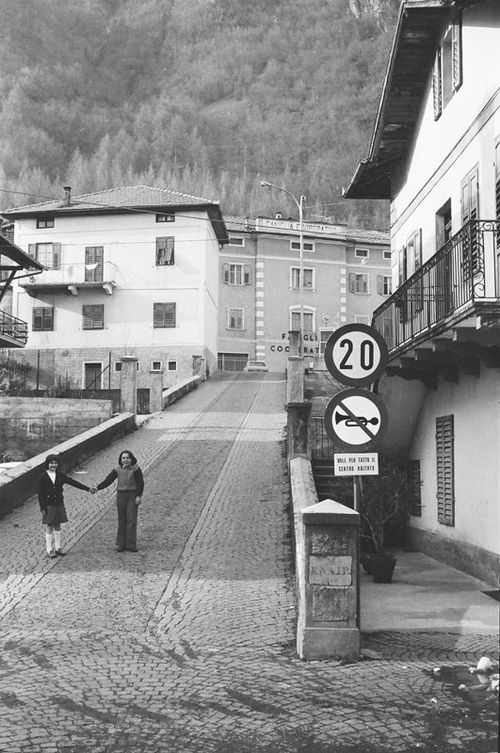 ﻿﻿The World Soundscape Project carried out an exhaustive aural interpretation of five European villages and several cities where R. Murray Schafer had been invited to lecture at music schools and academies. He encouraged students and teachers to listen to their surroundings and asked them to reflect on how the soundscape might influence modern music. The WSP also met up with composers such as Leo Nilsson and Otto Laske and discussed the relationship between their music and the soundscape in which they were living. These frogs recorded in a pond at the rear of a hotel where the WSP group was staying ('Rennes / Montreuil, France April 18/75', C1064/30) are described by the recordist as sounding like a Gamelan, and possibly even resemble electronic music from the 1970s.

In R. Murray Schafer's seminal book The Tuning of the World,  he writes: 'Today all sounds belong to a continuous field of possibilities lying within the comprehensive dominion of music. Behold the new orchestra: the sonic universe! And the musicians: anyone and anything that sounds!' (The Tuning of the World, 1977, p.5). World Listening Day 2013 reminds us to open our ears and listen to the musicality of the sonic universe. 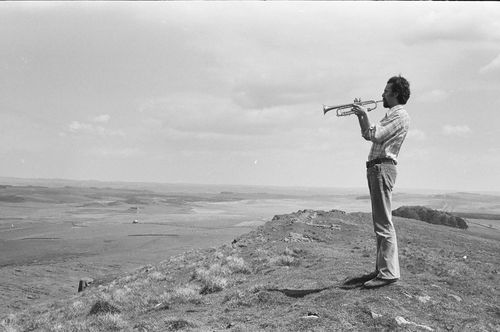 Posted by Andrea Zarza Canova at 8:30 AM

Thank you so much for posting this information, and especially the recordings! I found "Five Village Soundscapes" at the University of Pennsylvania library while in graduate school for architecture and read it cover to cover. My profession is so dominated by the visual -- but sound is just as important for creating the texture of a place. One of my great joys in having moved to a small town recently is hearing the church bells.