Beautiful Science: exploring the diversity of life on Earth

The songs and calls of 100 species have been specially selected for the British Library’s upcoming exhibition Beautiful Science: Picturing Data, Inspiring Insight. Taken from the Library’s extensive collection of natural sounds, these recordings have been incorporated into a rather fab bit of phylogenetic software – welcome everyone to OneZoom.

This tree of life explorer helps users discover and visualise the evolutionary relationships between species in an easy to access way. Working much like a map, the explorer lets you zoom into particular areas of curiosity and in so doing so reveals interesting and sometimes surprising branches in our planet’s evolutionary history. Did you know that elephants and hyraxes are basically first cousins? You will once you’ve had a look at OneZoom. 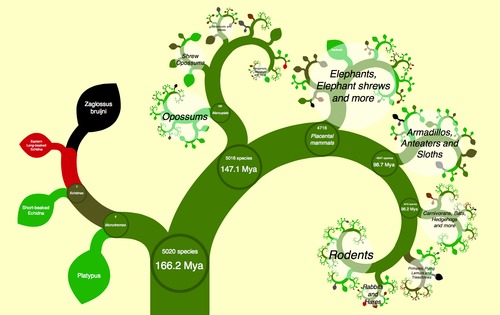 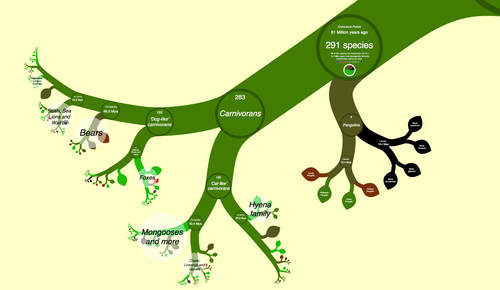 As you zoom ever deeper into the tree, families, genera and eventually species are gradually revealed. Each species is represented by a leaf on the tree; each leaf is then colour-coded to reflect the current conservation status of that animal. Now, for the first time, some of these leaves also carry with them the typical vocalisation of the species they represent. Here are just some of the birds, mammals and amphibians that made the final cut:

OneZoom is the brainchild of Dr James Rosindell, a biodiversity theorist based at Imperial College London who, together with Dr Luke Harmon from the University of Idaho, came up with the initial concept.

The idea of representing relationships between organisms, both living and extinct, in the form of a tree gained popularity within the scientific community during the 19th century. The great naturalist, Charles Darwin, used this concept to express the diversification of species from a common ancester in his seminal work 'On the Origin of Species by Means of Natural Selection'. The German biologist Ernst Haeckel produced several trees of life that reflected refinements in his research into the phylogenetic history of life. 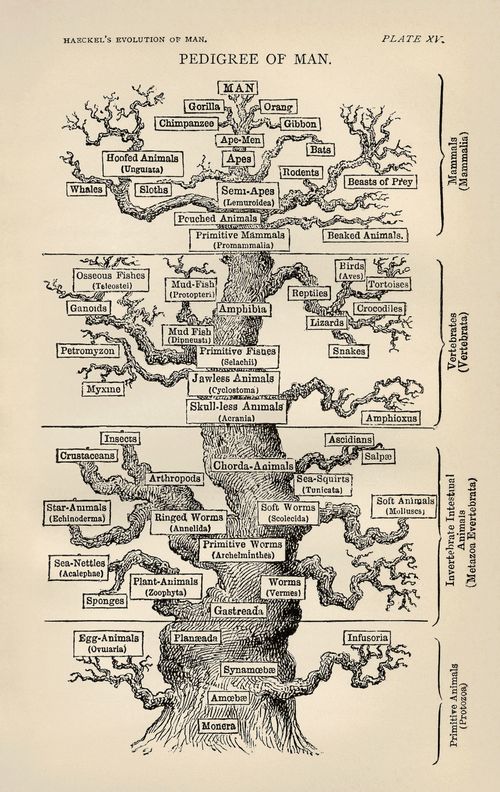 The evolutionary illustrations of Darwin and particularly Haeckel are beautiful visualisations of data that reflect the scientific knowledge of the time. The level of information available however is defined by the medium on which they are presented. The future lies with phylogenetic trees, such as OneZoom, that exist beyond the page, allowing an unprecedented level of exploration and understanding of how life on Earth evolved.

Beautiful Science runs from 20 February to 26 May, 2014, is sponsored by Winton Capital Management, and is free to the public.

You cor call Black Country Brummy but they both ai half bostin!

This month we've uploaded linguistic descriptions of conversations about local speech in Kings Norton, Dudley, Hampton-in-Arden, Handsworth and Wolverhampton: the set of BBC Voices Recordings made by BBC WM. The descriptions list the participants' responses to a set of prompt words and, in the case of Dudley and Hampton-in-Arden, also include a summary of the grammar and phonology of the speakers.

In a recent review of Channel 4 sit-com 'Raised by Wolves' Guardian TV critic Stuart Jeffries bemoaned the dearth of actors able to produce convincing West Midlands accents and general lack of awareness of the distinction between speech in Birmingham and in the Black Country. Although these conversations confirm a number of shared pronunciation features and common vocabulary, e.g.babby [= 'baby'], caggy [= 'left-handed'], mom [= 'mother'] and pumps [= 'child's soft shoe worn for PE'], they also demonstrate that the differences, albeit subtle to outsiders, are extremely important locally.

A striking feature of Black Country dialect that distinguishes it from speech in Birmingham is the negative marking of verbs. I remember one of my earliest encounters with Black Country negation was when my school cricket team (in 'posh Brummy' Sutton Coldfield) crossed the border into the Black Country to play a match in Walsall. Batting second and requiring six from the final over, our batsman launched the ball to 'cow corner' (the term favoured by our purist cricket master to express his disdain for any unorthodox leg-side slog). As the ball landed agonisingly short of the boundary their closest fielder yelled enthusiastically to his team-mates it day goo owva. The umpire, rightly interpreting this statement as confirmation that the ball 'did not go over' [the boundary], signalled four and indicated a home win.

This is an example of the Black Country English system of marking a verb as negative simply by modifying its vowel. This occurs in a small number of verbs in Standard English, such as will > won't, do > don't, can > can't and shall > shan't, in which a word final <-nt> sound also clearly represents a contracted form of the negative particle not. In Black Country dialect, however, speakers not only omit the final <-nt>, but also extend the pattern of vowel modification to most auxiliary and modal verbs such that 'be', for instance, is negated as ai in the present tense and wor in the past, negative 'do' surfaces as doh in the present and day in the past tense, negative 'will' converts to woh, 'can' mutates to cor [= 'can't'] and so on. There are numerous examples in the recording in Dudley, such as:

0:46:41 how could you say that a bloke who was a pattern-maker or summat like that in a foundry that that'd got a strong dialect accent who who was building things that were being shipped round the world [...] these blokes wor [= 'weren't'] thick they was anything but

The routine use of mom [= 'mother'] in the West Midlands is, interestingly, considered an Americanism by British Jamaicans in Handsworth, although Stuart Jeffries' fury at the 'misuse' of mum in 'Raised by Wolves' suggests mom's the word in this part of the UK and has been for quite some time. These speakers' preference for muma and other wonderful Jamaican English expressions like crepes [= 'child's soft shoe worn for PE'], fenky-fenky [= 'easily tired'], bringle [= 'annoyed'] and no brought-upsy [= 'ill-mannered'] alongside well-established Black Country and Brummy terms in these conversations gives a sense of the  diversity of voices to be found in and around the UK's second city.

Posted by Jonnie Robinson at 10:37 AM

Accents & dialects, Voices of the UK