Thunder. Crashing waves. Eerie screams and cries. These are just a few of the natural sounds that have been provided to students participating in this year's Off the Map competition. The competition, organised by the British Library, GameCity and Crytek, challenges videogame design students to create 3D explorable environments, using Crytek's CRYENGINE software, inspired by digital content from across the Library's collections.

A gothic theme was specifically chosen for this year's challenge to tie in with the Library's upcoming exhibition Terror and Wonder: the gothic imagination. Maps, images, texts, architectural plans and, for the first time, sound recordings  were selected by curators across the library in response to the following subthemes: the gothic splendour of Fonthill Abbey, the coastal town of Whitby with its links to Bram Stoker and Edgar Allan Poe's short story The Masque of the Red Death. 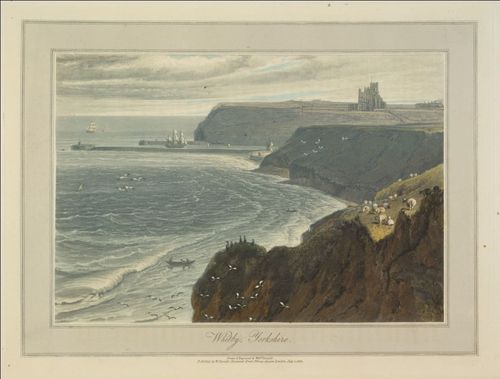 A view of the coast by Whitby. By Francis Jukes, 1811 (c) British Library Board

A show and tell event, held at the Library earlier in the year, gave students the opportunity to explore additional collection items, learn about issues surrounding audio copyright, ask questions and meet the teams behind the competition. 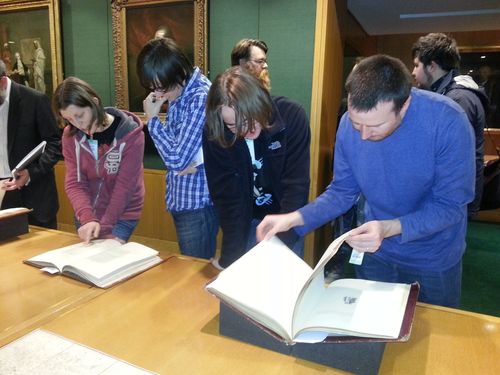 A few months later, our student teams are beginning to show the fruits of their labours, with a series of blogs, renders and flythroughs that are absolutely fascinating to follow. The sheer amount of effort that is being expended in their entries is fantastic and, for curators such as myself, who scoured the Library's collections for suitable content, to see the material being used is incredibly exciting.

The Flying Buttress is just one of our teams, comprising second year game design students from De Monfort University. The team have made good use of the assets provided, incorporating several British Library sounds into the soundtrack of their Whitby inspired level. One such sound was a woodland atmosphere, recorded in the dead of winter, by British wildlife sound recordist Richard Margoschis. A blustery wind, gusting through trees, accompanied by the harsh cries of Carrion Crows, produced a suitably bleak ambience. Team member Ben Mowson describes how he combined this raw recording with other assets to create the level's outdoor atmosphere:

In the first area, what you can hear is an excerpt from Mozart's String Quartet in C Major, Mvt 1. It's in the public domain, and I really like the discordant, mournful start the piece has. I took the first 20 or so seconds, slowed it down by around 120% and lowered the pitch, to give it a more ambient and subtle effect. This was then mixed into various sound effects from freesounds.org, and a few tracks from The British Library website. The overall effect was to have the classical piece be blown to the player by the wind.

The level flythrough, combining both visuals and sound, demonstrates just how effective a carefully thought out soundtrack can be when trying to evoke a certain mood.

Other student teams working on the challenge include the aptly-named The Poefessionals who have built a level based around a manor house full of references to gothic literature, and Owls in Towels who have created a rainswept, clifftop environment.

On the Rocks flythrough - Owls in Towels

Getting the sound right is crucial when trying to create a specific atmosphere. Remove the soundtrack and, though the visuals clearly help set the scene, the overall impact would undoubtedly lessen. The immersive nature of sound facilitates the generation of a tension necessary to acquire the full attention of the user and from what I've seen so far, our student teams have embraced this philosophy wholeheartedly.