The Imitation Archive Part 1: recording the sounds of the world's first computers

Between January and March 2015, Matt Parker was artist in residence at The National Museum of Computing, Bletchley Park. The residency, which was supported by the Arts Council England’s Grants for the Arts Scheme, was an audio archiving project that resulted in the production of 116 unique audio recordings of some of the world’s most historically significant computer technologies. Within the collection are sounds of the world’s oldest original functioning digital computer, the Harwell Dekatron (also known as WITCH), a faithful replica model of the world’s first digital computer, Colossus and a replica model of the electromechanical decryption device the ‘Bombe’, designed by Alan Turing and Gordon Welchman. In the first of two posts, Matt talks about developing The Imitation Archive and his experiences during the residency period.

In August 2014 I produced an audiovisual installation titled The Cloud is more than Air and Water. The installation was concerned with the claustrophobic sound of the IT Data Centre. Through original footage and field recordings, the piece was composed to demonstrate some of the key issues related to the dislocation between user and machine in the ‘Cloud’ age of computing. Having focused my work on the modern environments of computing for almost a year, I began to think increasingly about the historical narrative behind computing; how the environments and relationships between users and computers have shifted over what is a relatively short period of time. This led me to the discovery that there isn’t a comprehensive archive of sounds of computers in existence (at least not in the UK).

It has been argued that perhaps computer sounds are not really that distinct from any other electromechanical machine. There is whirring, clicking, buzzing. Much of the noise is really made by the cooling units rather than the processors themselves. I had begun to wonder myself whether the sounds I was looking for might not really be all that distinct, however when I arrived at Bletchley, the sounds of computing turned out to be wide ranging and unique in ways I couldn’t have imagined. 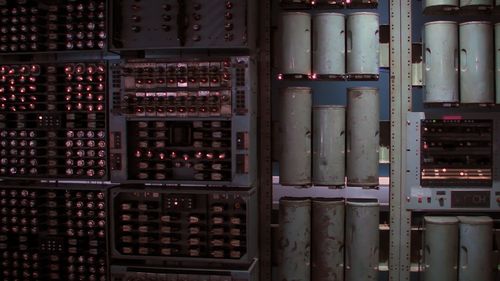 After having some initial discussions with Stephen Fleming, the PR Manager for the National Museum of Computing and a couple of the museums volunteers, I prepared a list and rough plan for a full week’s worth of recording at the museum, creating slots for each of the major devices and grouped slots for some of the smaller featured devices.

One of the best things about the museum is that there isn’t anything in the public collection that’s there just to be looked at from behind a Perspex screen. It’s one of the really important aspects of the museum’s value as all items are either fully restored or in the process of restoration. Functionality is critically important to the museum; after all why would you just look at a computer (some of the early machines do look phenomenal though)? The very purpose of a computer is that it performs a task, which they all do with accuracy and reliability that makes the reliability of my middle of the road smartphone look pretty embarrassing.

The volunteer pool is large and made up of hardware and software computing engineers, many of which are retired. They are all enthusiasts. They speak in a language that understands computing; they refer to Boolean logic as if it’s common vernacular and discuss the virtues of machine code over software defined interfaces. It’s a fascinating environment where each volunteer contributes their expertise towards the restoration of unique machines. Some are fascinated by the wartime codebreaking machines, the pioneering devices that are said to have reduced the length of the Second World War by six years. Others are absorbed by the mechanics of early era networked systems, giant tape reels and hard drive disks the size of a tractor’s back tyre. Others meanwhile find themselves fascinated by the early PC era, when the initial boom of Silicon Valley hit, when the UK was a powerhouse of the computing industry, battled out between Sinclair, Amstrad, Acorn and their US competitors at Apple and IBM. 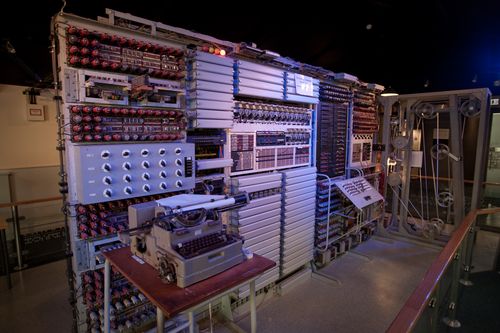 From the first day of arrival, it was clear that my initial schedule was not going to run fully to plan. A challenge with programming this kind of activity is disseminating this information to a broad volunteer group and to gain their understanding about what I would be trying to achieve.

On my first day of recording, I setup extensively within the Tunny Gallery, home to a replica Tunny Machine, a series of analogue radio receivers, teletype machines and the restoration project for a Heath Robinson machine (a precursor to the Colossus). The volunteers were very happy to assist with my recordings, patiently waiting for me to setup various microphone configurations and placements. I’m very happy with what I captured. When a microphone is in a room it picks up sound from all corners. As is often the case with recording in spaces with people in them, it doesn’t occur to mind that perhaps any sound you make, any movement, heavy breath, *whispering*! will be picked up by the microphone! Achieving silence in the space for more than two minutes would be an almost impossible task!

I started to schedule sessions at night, after the museum had closed, which was the only way to have guaranteed quiet! One of the unique intricacies of the museum is the synchronised clock system throughout the building. There are two original Bletchley Park mechanical clocks in the entrance hallway which sound incredible. Their recording makes it into the archive as it is a critical feature of the building. Every 30 seconds, throughout the entire block, a clicking thud occurs, synchronising the clocks around the museum together. Every 30 seconds… a recording is interrupted by synchronising clocks! It became a highly significant aspect to the experience of recording, inescapable and sometimes, when you forget that it happens, late at night in a dark corridor, it was shocking!

I decided to work with recording key features of as many objects as possible. This turned out largely to be demonstrating the boot sequences or the turning on of a device, carrying out a basic task with the device and switching the device off. As was the case with the clocks in the museum, other devices that were not digital computers were also making interesting sounds and so, as it was there, I recorded these as well. This saw a lot of time working with mechanical comptometers and other analogue programmed mechanical calculators.