Frank Andrews was a familiar face at the National Sound Archive in Kensington during the early 1990s when I first began work there.  Thereafter he was seen regularly in the Humanities 2 Reading Room where he was carrying out research for his many published discographies.  Fellow discographer Bill Dean-Myatt kindly provided this obituary. 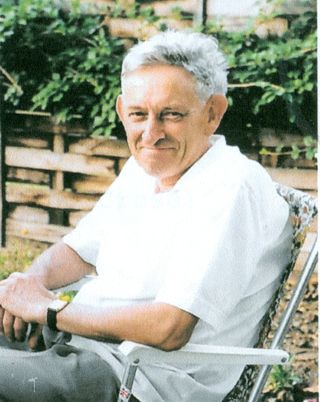 The noted discographical researcher Frank Andrews died on 26th June at the age of 94.  His reputation in this arcane field of scholarship was international in scope and his many publications set standards that provided the bench-mark for all his successors.

Frank was born on the 4th September 1920 in Willesden, North West London, the second child of Katherine and Herbert Andrews: he had an elder sister and two younger brothers.  Afflicted by asthma from a very young age he was too delicate to attend the local school and was sent to a special school for children with poor health, where he remained until the age of sixteen.

Tragedy struck the family when, at the age of 12, he lost his father.  His mother was left with four children to raise on her own, in addition to which Frank’s blind grandfather also lived in the house.  Nevertheless, despite their relative poverty and his ill-health he enjoyed a happy and loving childhood.  Because of his poor health he was frequently confined to bed for long periods, but these were not wasted as he became an omnivorous reader and an autodidact.

When Andrews left school, where he had risen to be head-boy, he became a messenger boy for a local company after which he was apprenticed to a diamond tool cutter, a job at which he worked until he retired at the age of sixty-five.

Through a mutual friend Andrews met his future wife Wyn, whom he married in 1953. She shared his love of music and was, in the course of their married life, to be the perfect hostess when he entertained the many British and overseas discographers who came to meals or who stayed with them, sometimes for extended periods.

Frank and Wyn used to take in foreign students who wanted to learn English and on one occasion in 1969 he and a French student, who was keen on music, went on a visit to central London where they came across an exhibition that was run by the CLPGS (City of London Gramophone and Gramophone Society).  The man in charge was Ernie Bayly and what he had to say interested Frank so much that he decided to do some research into the history of early record companies.  This was partly motivated by his Socialist views because he wished to discover for himself just how capitalism worked and record companies seemed to provide a suitable vehicle for this research. For many years he spent every Saturday in the British Museum’s newspaper archive at Colindale.

Andrews was also a regular visitor to the EMI Archives where he was granted open access to all their archives, both ‘in front and behind’ the counter.  So familiar was he with their holdings that he helped re-organise them in to a more logical form.

The casual encounter with Ernie Bayly at the CLPGS eventually produced forty books and innumerable articles in specialist magazines that have documented the culture of the United Kingdom as recorded on 78-rpm records and phonograph cylinders. His help with information provided is acknowledged in hundreds, if not thousands, of books, articles and sleeve notes produced world-wide.  Questions, even the simplest, from anyone would provoke Frank into a lengthy reply, handwritten and often written on the original letter you had sent him.  He was always the most generous of men when it came to sharing the fruits of his research,

His taste in music was eclectic, ranging from the music-hall singer Gus Elen to the music of Mozart via barbers shop singing and Deanna Durbin.  He also played both the piano and the button accordeon. A great lover of brass bands he, and Wyn, were patrons of Regent Brass, a band based in Brent. Somehow he also managed to find time to maintain an immaculate garden. A liberal thinker he was a staunch atheist and very much enjoyed vigorous debate.

Andrews received awards from the Association of Recorded Sound Collections and was a Patron of the CLPGS, by whom he was recently made the first recipient of a silver shield named the Frank Andrews Trophy for Research in Recorded Sound.

He leaves a widow and two daughters, Joy and Clare, and four grandchildren.  Very sadly his oldest daughter Kay died only a few weeks ago.

Published by the CLPGS unless otherwise stated

CARTER, Sydney & ANDREWS, Frank.(1975) A Catalogue of Sterling Cylinders and A History

Posted by Jonathan Summers at 3:05 PM