Memories Of Hiroshima And After 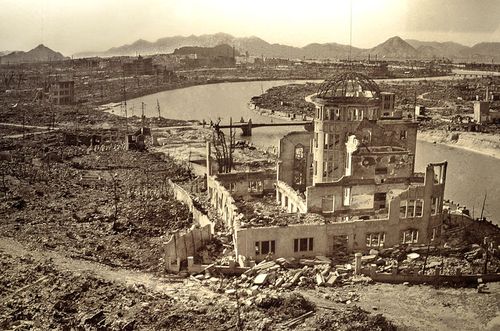 The Hiroshima Genbaku Dome after the bombing

August 6th marks 70 years since the atomic bombing of Hiroshima. It is hard to think of many events in human history that have had quite such significant consequences. Not only did Hiroshima and the subsequent destruction of Nagasaki help to bring the Second World War to a close, but the terrible power demonstrated had after shocks in geopolitics, scientific development, popular culture, art, philosophy, film, literature, ethics and other aspects of life. Yet this huge significance makes it too easy to overlook the effects of the bombing on countless millions of individuals, many of whose stories are recorded in the British Library’s oral history archive.

The Manhattan Project, the secret American led effort to develop the atomic bomb, included an important contingent from Britain. Amongst them was physicist Joseph Rotblat, who was working in Britain when the outbreak of war in 1939 left him unable to return to his native Poland. Despite deep reservations over science being turned to such purposes, Rotblat joined the atomic bomb effort in the hope that it would deter Nazi Germany, but wrestled with moral dilemmas over working on such a weapon.

Increasingly troubled by the ethics of such a weapon, particularly after it became clearer that Germany could not develop an atomic bomb, Rotblat left the Manhattan Project in 1943, the only scientist to leave on moral grounds. After the War he became a disarmament campaigner, sharing in the 1995 Nobel Peace Prize for his work as first Secretary General of the Pugwash disarmament conferences.

At least 70,000 people, soldiers and civilians, were killed by the explosion in Hiroshima, with many thousands more dying later of injuries and the effects of radiation. Amazingly, amidst the devastation, there were also many survivors, amongst them student Junko Kline who remembered her experience of August 6th 1945 in this recording by R.H. Henry from 1957.

Junko Kline describes her experience of the bombing of Hiroshima

After the War ended there were many visitors to Hiroshima, amongst them Royal Navy officer Nicolas Stacey, who visited the city several weeks after its destruction. As he discusses here in an interview with Lousie Brodie, the effect of the visit on Stacey was profound, leading him to ordination as a Church of England priest and to campaign as a social activist.

Nicholas Stacey describes his visit to Hiroshima in 1945

After Hiroshima countless scientists, engineers, technicians and servicemen found their working lives directed toward the development of nuclear weapons as other countries developed nuclear arsenals to bolster their status as great powers and deter potential enemies. Amongst them was technician Frank Raynor, one of thousands of British personal assembled off the coast of Australia in 1952 for the testing of Britain’s first atomic bomb. Raynor recalls his work in the run up to the test and his memories of witnessing the event in this clip from An Oral History of British Science. The shadow of Hiroshima’s mushroom cloud loomed large over the decades of Cold War that followed, in which the peace was held largely by the threat of nuclear war and mutually assured destruction. In 1957 Junko Kline, who became religious during her painful recovery from the bombing, explained that she prayed that “we shall not repeat our sin.” Today there are still thousands of nuclear weapons stockpiled by different countries, but 70 years after the bombing of Hiroshima its legacy remains, just as she hoped, as a symbol of peace.

Junko Kline talks of the legacy of Hiroshima

Voices of Science is a growing web resource featuring audio and video extracts from the British Library's oral history of science collections.  The website provides links to full unedited interviews and transcripts available to users worldwide via British Library Sounds.

Very moving, Tom, a powerful way to remind us all of these momentous and devastating events.