I am, in fact, extremely optimistic about the future of journalism. I have real confidence in the prospects for the news media. And if you ask me that annoying question, whether I see the glass half empty or half full, I’d say two-thirds full. In fact, I think this is the most exciting time to be a journalist since the advent of television.

Yesterday James Harding, Director of BBC News, gave the inaugural W.T. Stead lecture at the British Library. The renowned 19th century campaigning journalist William Thomas Stead established a new form of journalism, dubbed 'the new journalism', which laid the foundations for the populist, inquisitive and crusading style of newspaper production which has proved so enduring. Stead helped bring about a revolution in journalism; Harding pointed out that we are in the throes of a another news revolution today. 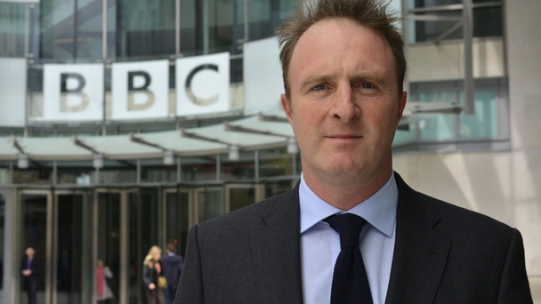 Harding's argument was that the era of news journalism that Stead ushered in is coming to an end. He said:

The case I would like to make to you tonight is that the era that started with Stead – the era in which the Press had a legitimate claim to be a unique check on the powerful and the sole interrogator of the establishment; the era in which editors had unrivalled power to command public opinion and shape the political agenda; the era in which the Fourth Estate was a clutch of established institutions run by identifiable individuals in control of the news – that era is over.

By this he meant that the era in which the established news media (print, TV, radio) dominates and determines the production and distribution of news is over. The digital revolution has brought the power of information and the tools to distribute that information into the hands of anyone. This changes journalism, changes the news agenda, changes the relationship between producer and consumer of news, changes the business models on which news production has depended.

You don’t have to work in news to be alive to the issue: the pool of labour correspondents who reported working life in Britain, the training ground for journalists such as the late, great John Cole, has disappeared; the numbers of foreign correspondents have been hacked back, notably by the US TV networks; and, most alarming has been the collapse of the classified advertising market and the impact it has had on local newspapers: The Press Gazette has reported that 242 local papers shut between 2005 and 2012; the latest company results from Johnston Press state that it cut 1,300 jobs in 2012, some 23 per cent of the workforce; almost half the employees of Northcliffe Media went between 2008 and 2012, falling from 4,200 to 2,200 according to its owners the Daily Mail & General Trust. Claire Enders, the media analyst, has calculated that 40 per cent of jobs in the UK regional press have gone in the course of five years.”

But these changes did not make him pessimistic. Indeed, as quoted at the top of this post, he said this was the most exciting time to be a journalist since the advent of television.

Professional journalists cannot expect to have the influence we once did, but, if we’re clever, if we’re innovative and if we’re trustworthy, we can earn it. This is because we live at a time when there is an unprecedented hunger for information and ideas, because the proliferation of new news providers means the number of working journalists is, actually, rising, because the tools available for story telling and story getting are more powerful than ever and because, as I hope to make clear, the new technologies have unexpectedly revealed the enduring value of some old principles in journalism.

He relished the challenge that the new news environment promises, with new services such as BuzzFeed, Vice and Upworthy challenging the models of how news is produced and distributed, indeed what news is (he pointed out also that such services are busy hiring journalists, so there is hope for the profession, but where it may be practised is likely to change). He also felt that these challenges would help bring about a re-focussing on what the principles of journalism should be:

At such a time, there has never been a greater need for original reporting, insightful analysis and challenging opinion. People making choices need information and intelligence. We need journalism. And, in Britain, we are extremely fortunate to have a boisterous, curious and courageous Press.

There is a contradiction here: welcoming the disruption to existing models of news production that the upstart newcomers are delivering, while at the same time speaking up for the value of traditional journalism values to deliver "a voice you can trust". This naturally led to a strong defence of the BBC's news services, and to his assertion that - in this world of shareable information and digital power placed at the fingertips of anyone with an opinion - the BBC's great asset is the trust with which it is hel. However, this had to be rooted in "uncompromising commitment to accuracy, impartiality, diversity of opinion and the decent treatment of people in the news".

There was some irony, therefore, that the questions afterwards focussed strongly on matters of trust in how the BBC manages the news, questions which also revealed that though the choice of news sources and services is huge, many people still take in the news in quite a linear, time-tested way. Complaints about privileging one sort of story above another, or the positioning of news stories, ought to be irrelevant if we are all selecting the news stories that most interest us by using the online and mobile tools available. But most are not doing this. Some seek out the news wherever they can find it; others expect it to come to them in the familiar, trusted form. Marrying the expectations of different audiences with the digital opportunities available, so that all feel included, is going to be the great challenge for any news provider.

The full text of James Harding speech, entitled 'Journalism Today', is available on the BBC Media Centre site. It refers to a great many news-related services which many will be keen to try out for themselves. This is a list, with links, of some of what was mentioned (with Harding's comments):

Posted by Luke McKernan at 4:39 PM