The 70th anniversary of D-Day was widely commemorated across the news media. One of the most striking ways in which the history was made real was the BBC's use of contemporary radio broadcasts and readings from original radio news scripts to bring the past back into the present. Broadcast at their correct times and dates, seventy years on, the scripts are part of the British Library's collection, and we were delighted to be able to work with the BBC to make a small selection of them available, as broadcasts, and to be read online. 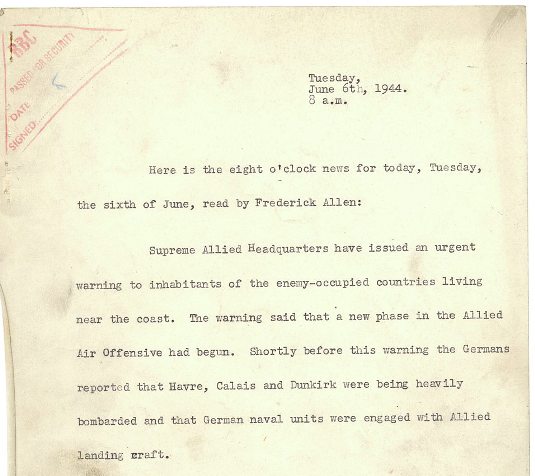 The broadcasts went out on BBC Radio 4 and BBC World Service news programmes, and on iPlayer, with the scripts being read out by Benedict Cumberbatch, Toby Jones and Patrick Stewart. They were read by actors because for many of these news programmes the original broadcast no longer survives, though happily two original recordings for 1944 delivered by John Snagge and Richard Dimbleby were also made available. Digitised copies of the scripts have been published online alongside the sound recordings.

The British Library's collection of BBC radio scripts runs from 1937 to 1972 (a set held on microfilm extend the collection to 1983). There are some gaps, particularly for the 1930s, but from the war years onwards the collection is a reasonably comprehensive record of what was broadcast by the BBC at different times of the day to UK audiences (the collection does not include scripts for broadcasts aimed at overseas audiences). For the latter years there are television news scripts as well.

This is a huge collection - there can be up to 200 pages of script for one day - and at present it remains uncatalogued. This D-Day collaboration with the BBC is a first effort at making the collection successful, and we hope to work with them in the future (including the near future) on opening up the collection to a general audience and to research.

The Second World War was when the BBC fully established itself as a service speaking to the UK nation as a whole, establishing its reputation and the expectations that have been subsequently placed upon it. It became the vital information source, as the people of the United Kingdom followed each step of war (military censorship notwithstanding) by listening to their radios, particularly the daily nine o'clock evening broadcast.

The effect created by the D-Day scripts and their re-readings shows what power lies in the contemporary account, particularly when we see it in the form of a typescript, with pencilled amendments, and that red stamp that says that the text has been 'Passed for Security'. The unemotional, almost matter-of-fact tone of the scripts contrasts vividly the enormity of the events that they are describing, as history was made by the hour. News turns into history then turns into news again. If we do not quite feel that we were there, we do feel that much closer a bond with those who were.

Posted by Luke McKernan at 9:29 PM