In 1843 Captain Christopher Simpson Maling of the Bengal Army asked the authorities about the precedence of his wife in Indian society.  Her name had been omitted from the table of precedence.  Jane Wemyss Maling was the daughter of Hon. Leveson Granville Keith Murray of the Madras Civil Service and the granddaughter of the Earl of Dunmore.

The government replied to Captain Maling that it had never interfered to regulate claims based on a statute of precedence in England.  A copy of the correspondence was sent to the East India Company Court of Directors in London.  In July 1844 a despatch to India from the directors stated that it would be perfectly correct for the government in Calcutta to decide the relative rank of ladies based on Royal Warrants and accompanying orders.  The Warrant under which the relative ranks of people in India was to be determined was dated 28 June 1841, and it specifically addressed the rank of ladies having precedence in England.  The directors anticipated that there would be no difficulty in deciding any question that might arise.  Ranks of people not mentioned in the Warrant should be regulated by general custom as decided by the Governor General in Council.

The same question of precedence was raised in 1846 by Hew Drummond Elphinstone Dalrymple, Acting Chief Magistrate and Superintendent of Police at Madras.  His wife Helenora Catherine was the daughter of Major General Sir John Heron Maxwell, Baronet of Springkell, Dumfries.  Dalrymple asked whether the daughter of a baronet was divested of her hereditary place and precedence on arriving in India, or did she fall under the last clauses of the Royal Warrant?  The Government of Fort St George consulted Calcutta and were told that the clause in the Royal Warrant applied.  This stated: ‘All Ladies to take place according to the rank assigned to their respective husbands, with the exception of ladies having precedence in England, who are to take place according to their several ranks, with reference to such precedence, after the wives of the members of council at the presidencies in India’. 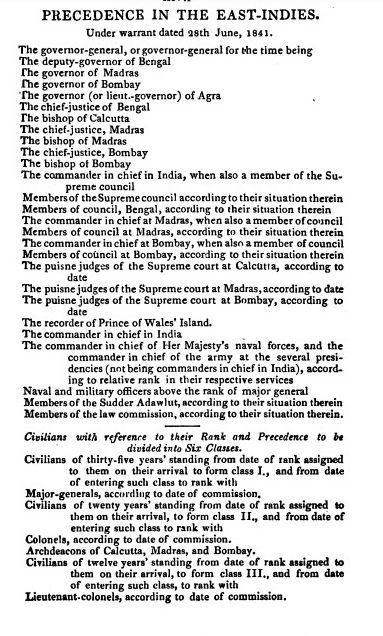 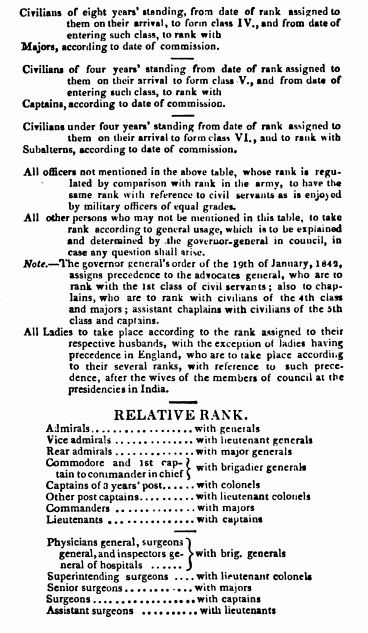 The order of precedence specified by the Royal Warrant of 1841 was published in the East-India Register and Army List.  At the top of the list was the Governor General, followed by the Deputy Governor of Bengal, and the Governors of Madras, Bombay and Agra.  Then came the chief justices and bishops, followed by the commanders-in-chief; members of the different Councils; judges; and naval military and law officers.  Civilians were divided into six classes, and the military were ranked according to date of commission.  There were also stipulations for the relative rank of naval and medical personnel compared with military officers.

Posted by India Office Records at 11:55 AM

In December 1756, Robert Young joined the East India Company ship Boscawen as a seaman on a voyage to India and China.  His monthly wage was set at £2 5s.  Young received two months’ imprest or advance pay, and five months’ absence money was paid to his ‘attorney’. 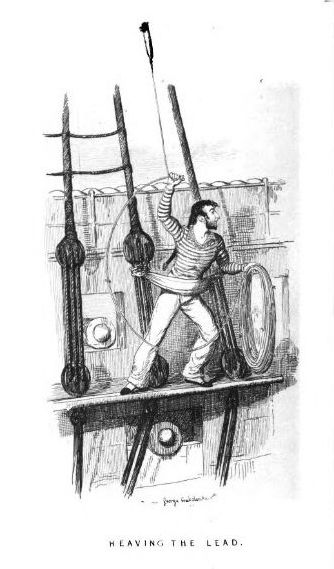 The journal of the Boscawen records that Robert Young died at sea on the afternoon of 18 August 1758 during the passage from Madras to China.  There were unpaid wages to claim, but his family had a problem: Robert Young did not officially exist.

The sailor’s real name was Robert Wood and the explanation behind the adoption of an alias can be found in the probate records held at The National Archives.  Robert wrote his will, using his birth name of Wood, on 16 August 1758, just two days before his death when ‘weak in Body’.  He left everything to his mother Margaret Wood of Warkworth, Northumberland.

The Boscawen arrived back in the Thames in March 1760.  On 21 March 1761, Mary Wood, spinster of St James Westminster, gave evidence to the Prerogative Court of Canterbury.  She stated that she was acting for her mother Margaret Wood, now the wife of Henry Taylor.  Mary understood that Robert had taken on his mother’s maiden name of Young when he joined the Boscawen in case he was pressed by a Royal Navy warship on the homeward bound voyage.  He might then desert with greater safety by reverting to his real name and evading detection.  Several other sailors who had entered the ship with him had taken on aliases for the same reason.

Probate was granted on 28 March 1761 to Mary Wood as attorney of Margaret Taylor.  Mary then applied to the East India Company for the money owed to Robert.  On 3 April 1761 she was paid a balance of £28 3s 9d.

Following on from our post celebrating the 50th anniversary of the first Women’s FA Cup Final, this post delves back further into the history of the women’s game.

I was surprised to find a newspaper report of a women’s football match at Bath in October 1726.  ‘Yesterday a new and extraordinary Entertainment was set on Foot for the Divertion of our polite Gentry; and what should it be but a Match at Foot-Ball, play’d by six young Women of a Side, at the Bowling Green.’

Women’s football featured at the birthday celebrations held in 1790 at Brighton for the Prince of Wales and his brother the Duke of York.  There was a cricket match played by the Duke and ‘many gentlemen of rank and fashion’.  Other amusements included two 11-a-side football matches, one for the inhabitants of Brighton and the other for young women.  Each game had a prize of 5 guineas for the winning team.  There was also a ‘jingle-match’ won by John Baker who dressed up in bells and escaped capture by ten blindfolded people for half an hour.  Baker won a jacket, waistcoat, and gold-laced hat.

Another story which caught my eye was a report of a  football match held at Walton near Wetherby in Yorkshire in 1773.  The married gentlemen of Walton played the bachelors for a prize of 20 guineas.  A fiercely fought contest was waged for over an hour ‘with many falls and broken shinns given on each side’.  The wife of one of the married men was watching her husband being hard-pressed and decided to go to help him.  She was not intimidated by seeing him brought down by the superior strength of his antagonist, but went after the ball and secured victory for her husband’s team.