An Indian soldier in France during World War I

A story for Armistice Day...

The India Office Records holds the Reports of the Censor of Indian Mails in France, 1914-1918. The Censor was concerned with letters to and from Indian troops in France and England, and his reports include translated extracts from soldier’s letters. The Government’s fear which led to the censoring of mails was that uncensored letters could provide military information to the enemy and that accounts of Indian soldiers suffering in France could distress their families at home and so lead to political instability in India. Touching, funny, sad and at times bawdy, the letters describe vividly the suffering the Indian soldiers endured and their longing to return to their families back in India.

This letter, originally written in Urdu, was from an Indian Muslim soldier writing from Marseilles, France to Moradabad, United Provinces, dated 14 January 1915. In passing it the Censor, Captain E B Howell, commented in his report that it read like an extract from the Arabian Nights. The soldier writes that he has been in France for a year and a half, but has heard that they will be leaving by the end of January or February at the latest. He says that his family must be very distressed at his long absence, and it reminds him of the following story. 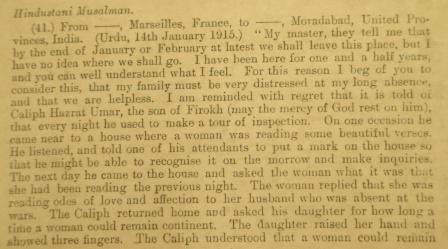 He writes that it is told that the Caliph Hazrat Umar used to make a tour of inspection every night, and that on one occasion he passed near a house where a woman was reading some beautiful verses. The next day he returned to the house and asked the woman what she had been reading. The woman replied that she was reading odes of love and affection to her husband who was absent at the wars. The Caliph returned home and asked his daughter for how long a time a woman could remain continent. The daughter raised her hand and showed three fingers. The Caliph understood that a woman could remain separate from her husband for three months, and he forthwith issued an order that whenever soldiers were sent to the wars they should be returned to their homes every three months.

The Indian soldier concludes by asking the recipient of the letter to pray that his difficulties may be removed and he may soon return safely with honour.

Discover more documents and books on this subject.

Posted by Margaret.Makepeace at 11:00:00 in Domestic life , Journeys , War , World War One

A very interesting letter for more than one reason. Obviously, first as another record of the Great War, and more evidence of Commonwealth involvement in the World Wars. Also it shows the depth of Islamic feeling in ordinary soldiers.

I know about this archive from an interesting Timewatch from the 1990s which I show Year 9 students- it draws on the letters from the Censor's office. There is also a novel about these soldiers on the Front, itself written on the eve of World War 2, by Mulk Raj Anand.