The Spy who Came in from the Heat

There is no obvious link between the late David Croft's sitcom 'Allo! Allo!' and the India Office Records, but almost inevitably visions of Herr Flick, Von Smallhausen and General Von Klinkerhoffen came to mind when I recently discovered the file IOR/L/PJ/12/623. 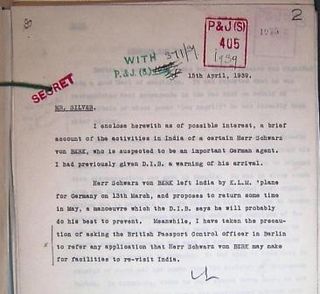 It contains mostly typewritten notes (no illustrations) relating to British surveillance of the magnificently-named Johannes Emil Schwarz Von Berk, thought to be not only a Nazi agent but also to have personal connections with the national leadership back in Berlin. Interestingly, the date span of the contents goes beyond the formal period of hostilities (April 1939 - July 1945). The file forms part of the IOR/L/PJ/12 sub-series, being documentation from and about the Indian Political Intelligence Department - a shadowy body responsible for the internal and external security of the Raj. Whatever nefarious activities Von Berk got up to while in India, the spooks were able to ensure that he did not succeed in damaging the Allied war effort! The file was one of a small collection of archival materials I produced in September when co-hosting a visit from staff working on the India desk in the Foreign & Commonwealth Office; no doubt their predecessors in the Whitehall of the 1940s regarded it with considerably less amusement. 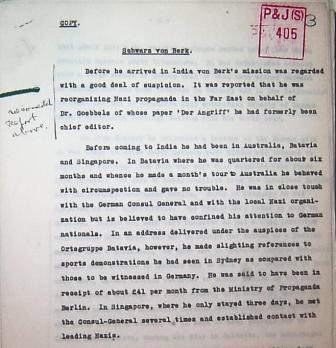