The Royal Commission on the Superior Civil Services in India (the Lee Commission) was appointed in 1923 to enquire into the organisation and general conditions of service, the possibility of transferring any duties and functions to provincial services, and the recruitment of Europeans and Indians.

To assist in its enquiry into the conditions of service the Royal Commission collected examples of the budgets of individual members of the civil service, some very detailed. The general thrust of the evidence submitted was the rising cost of living in India and the inadequate pay of civil servants. 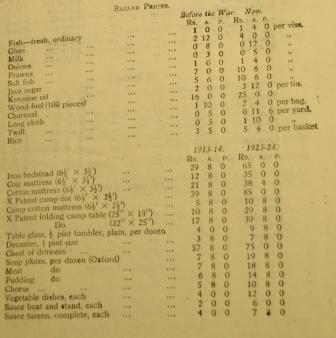 One example is a budget submitted with the written evidence of the Indian Educational Association, Burma (IOR/Q/11/24 No.1002). It compares the Bazaar prices of various goods in 1913/14 and 1923, such as foodstuffs, furniture, crockery and clothes, and lists the cost of the various types of servants (head boy, ayah, cook, paniwallah, sweeper, chauffeur, dhobi, mali, etc).

The anonymous monthly budget of a Professor in the University of Rangoon in his first year of service gives an interesting insight in to what civil servants felt they had to spend to keep up what they saw as their status in the community in which they lived and worked, both in the eyes of other Europeans and of native Indians. The Professor had four servants (personal boy, driver, sweeper and dhobi), employed a typist, owned a car, subscribed to a large number of scientific societies and was a member of three clubs (Golf Club, Gymkhana Club and Boat Club). His wife suffered a break down in her health after only a short time in Burma and had to return to England, and he lists the expenses associated with doctors' bills and her return passage. In fact expenses associated with medical problems were a common complaint of Europeans in India. He also lists in some detail the clothes he has to buy each year for himself and his wife (including her underclothes and toiletries!). 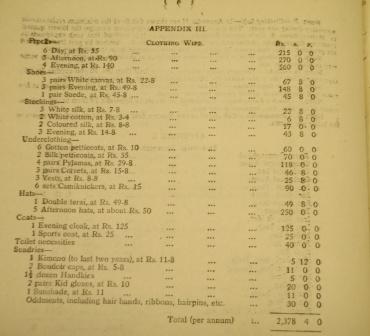 An interesting comparison can be made with the budgets of native Indian members of the ICS. The Indian Officers’ Association submitted a memorandum containing a number of hypothetical budgets for an Indian officer at different stages in his career (IOR/Q/11/20 No.801). The difficulties of status and family obligations are highlighted. An Indian is under obligation to perform several religious ceremonies in his family, something which is rarely mentioned as an expense in the evidence of European members of the ICS. Family obligations put a heavy burden on both European and Indian members, with the difficulties of raising and educating children, maintaining a household and meeting the inevitable medical expenses. However the Indian Officers’ Association make the point that the Indian has a joint family system, and obligations increase with the growth of the family. This substantially increases his travel expenses as he often has to travel to perform various obligatory religious ceremonies and pilgrimages, and to join several functions in the joint family system. 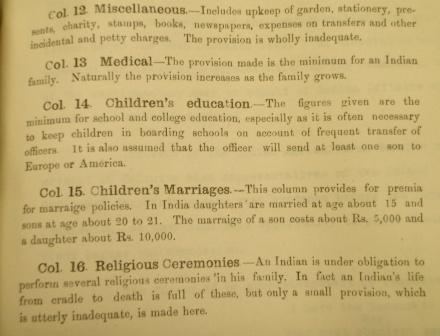 The papers of the Lee Commission (IOR/Q/11) are searchable online.

How fascinating. If my Anglo-Indian ancestors had featured in the Lee Commission's papers, I wonder if their budgets would have leaned more to the European model rather than the Indian - or indeed the reverse? Thanks for an interesting post.