The charismatic Sir Victor Sassoon was heir to a great fortune of a banking dynasty which originated from Iraq and later expanded from Bagdad to Bombay and Shanghai.  Like the Rothschild family, the Sassoons moved their headquarters to London in the 19th century and within a few decades they became members of the British establishment. 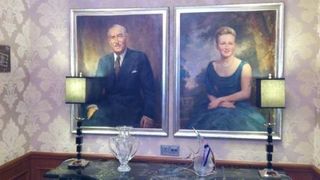 Portraits of Sassoon and his wife inside his former residence

Sir Victor, however, decided to spend the second half of his life in Asia.  In the 1920s, he had several titles to his name: Chairman of E.D. Sassoon Banking Co. Ltd; Member of the Indian Legislative Assembly; and Member of Royal Commission for Investigation of Labour Conditions in India.  Apparently his official position conflicted sometimes with his private interests.  As a result, he ran into some trouble with the tax collectors in India and he decided to transfer the bulk of his capital to Shanghai. 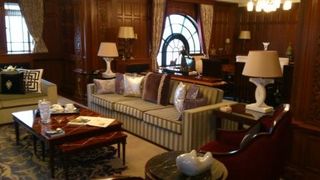 Shanghai in the 1930s was a thriving commercial centre and a “tax haven” for Western adventurers.  Sassoon came to cosmopolitan Shanghai as a serious investor in real estate with an estimated capital of around (US) $85 million.  In less than a decade, Sassoon transformed the face of the city with a series of luxury hotels and apartment buildings which are to this day still the most important landmarks of Shanghai.

Despite his huge commercial success and his privileged life, Sassoon was a worried man.  His busy social life with numerous lady friends hid a deep-seated anxiety because he was a stateless person living at the mercy of a foreign land.  The impending possibility of war and widespread anti-Semitism dashed his hopes of returning to Europe.  In Asia, the Japanese threatened to take over all of China and to establish a Pan-Asia-Pacific empire.  As far as Sassoon was concerned, the only option was to protract his stay in Shanghai as long as it remained in a state of anarchy.  Fans of J. G. Ballard may remember the scene of 1930’s Shanghai in his autobiographical novel Empire of the Sun.  The British were seized with panic when Japanese invaded the city. 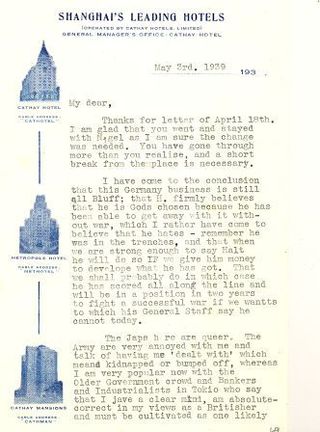 From his letters to Yvonne FitzRoy in the 1930s, Sassoon emerges as an intermediary between Britain and Japan, although he had no official title at that time.  In one letter he laughed off the rumour that he was involved in arranging secret loans to the Japanese government for the development of northern China as a defence against Russia.  In a memorandum written in 1939, however, Sassoon portrays himself as a shrewd operator engaged in direct talk with the Japanese Emperor, Finance Minister, and other important members of the National Diet (the Japanese Parliament), proposing to turn a district of Shanghai into a Japanese settlement.  In order to ensure the extraterritorial rights of other foreign settlers in Shanghai, he had to sell part of China to the Japanese without the consent of the Chinese government. That revelation may come as a shock to the people of Shanghai, who always considered Sassoon as their trusted friend.

Sassoon eventually left Shanghai in 1948 before the communist takeover of China.  He transferred his assets (except real estate) to the Bahamas.  Wary of the scourge of anti-Semitism, he converted to Buddhism and devoted his later years to philanthropy.