Rescue of an Indian boy from slavery in Muscat

The Collections of the Board of Control, the body which oversaw the activities of the East India Company 1784-1858, contain many cases relating to slavery. One such tragic case is that of an Indian boy by the name of Hussain Bushkh bin Cutura Coombhar. In early 1842 it came to the attention of the Native Agent at Muscat that an Indian male had at some point in the past been brought to Muscat by an Indian named Meer Ameer Ally and sold to one Suliman Kinar. The Agent was able to secure the boy’s release and despatch him by boat to Bombay with a request that the authorities take charge of him. 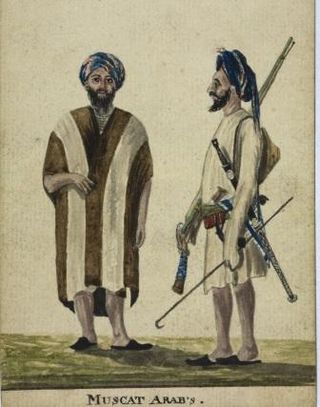 On 14 November 1842, P W LeGeyt, Senior Magistrate of Police at Bombay reported to the Secretary to the Bombay Government that his Department had taken charge of Hussain Bushkh. In a statement made to LeGeyt, Hussain Bushkh related that he was a native of Lucknow, that his father was a porter in the suburbs of the city, and that he was 12 or 13 years old. He said that one day many years previously he had been playing with some other boys near his home when a person named Meera Meer Ali enticed him away and took him to Calcutta. He told Hussain Bushkh that he was taking him on a pilgrimage to Karbala, but instead he took him to Muscat and sold him as a slave to Suliman, where he remained as a domestic servant until the Native Agent at Muscat secured his release. Hussain Bushkh expressed to LeGeyt his wish to return to Lucknow, though he feared he would be unable to recognise his parents.

A request was made by the Bombay Government to the Resident at Lucknow to make enquiries regarding the boy’s parents, and communications were also made to the Police authorities at Bombay and Surat to be vigilant in preventing kidnapped children being taken away, particularly during the season for the embarkation of pilgrims to the Red Sea.

Sadly the correspondence on this case ends with a letter from LeGeyt informing the Bombay Government that Hussain Bushkh had been sent to the Native General Hospital where he subsequently died from the prevailing epidemic of cholera. 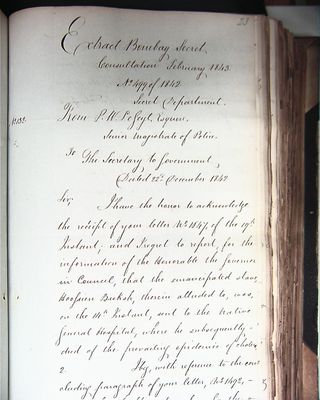 The Collections of the Board of Control are searchable online

Posted by Margaret.Makepeace at 07:00:00 in Crime , Journeys , Slavery