Movember 2012 is entering its final week.  This is a moustache-growing charity event held during November each year that raises funds and awareness for men’s health.  To provide encouragement to participants to persevere with their efforts until the end of the month, here is a picture of Sir Charles Umpherston Aitchison sporting a splendid moustache.  We also have a story about the college in Lahore founded by Aitchison. 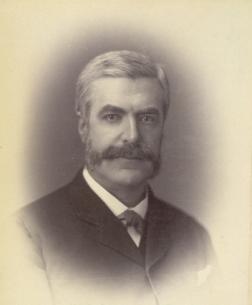 A Record of the Aitchison College by the principal J.C. Godley was published in Lahore in 1901, in the wake of a Viceregal visit by Lord Curzon in 1899 (BL, V 9080). Garnished with photographs of the founder Sir Charles Aitchison, the buildings and grounds, and a list of distinguished personnel who consented to act as Visitors, the book also contains biographical information about 230 Indian students between the foundation date of October 1886 and January 1901.  The College had seventy two students in residence at the time of publication.  Rather depressingly, no fewer than twenty one students were known to have died: Muhammad Raza Khan succumbed to consumption; Amar Singh and Muaz ud-din Ahmad to cholera; Naina Singh to pneumonia; Burhan-ulla Khan to epilepsy.

Exactly half of the intake is identified as Muslims, the remainder being almost equally divided between Hindus and Sikhs, with one pupil, Saw Loo, being a Burmese Buddhist. The individual entries tend to give the dates of entering and leaving the College, together with some family background and an indication of the boy's post-College career. Winners of the Lyall Medal are recorded. Some alumni went on to military careers, such as Gulmawaz Khan (Jamadar, 18th Bengal Lancers) and Paritam Singh (Jamadar, 23rd Pioneers). Others joined the civil service: Talib Mehdi Khan (Extra Assistant Commissioner, Rohtak) and Balwant Singh (learning judicial and revenue work at Ferozepore). Suchet Singh and Sundar Singh became sergeants of police, while in contrast Fateh Muhammad Khan ‘was employed in 1900 on special duty in connection with the famine’. The occupations of Zulfikar Ali Khan and Umrao Singh are recorded slightly ambiguously as "Estate management and literary pursuits", whereas the three years Aga Ghulam Dastgir spent at the College enabled him to leave India to study at Worcester College, Oxford. Unfortunately Ranjit Singh only lasted a year at Aitchison, afterwards "studying with a private tutor", and we do not get to know what was behind the five expulsions during the academic year 1893-1894. The most distinguished pupil must surely have been Bijay Chand, "now Raja of Bilaspur" and therefore entitled to an eleven-gun salute.

With pardonable pride Mr. Godley spends some time trumpeting the College’s success on the sports field. Attempting to transfer the ethos of the Victorian public school system to northern India cannot have been easy, however, and there are passages in which he fails to suppress a sense of frustration: ‘... education at the College has done little to change hereditary ways of life and to open new fields of activity to the sons of the Punjab gentry’. Perhaps because of this Godley moved to a post in the Indian Education Service Inspectorate in 1904 (IOR/L/PJ/6/661, no. 233).

The College exists to this day as a distinguished centre of secondary education in Pakistan, and no doubt Aitchison's gimlet eyes look down on the College's present students exactly as they did more than a century ago.

Posted by Margaret.Makepeace at 07:00:00 in Health , Journeys , Religion