The Indian Sepoy in the trenches

Many peoples from across the globe fought in the trenches during the First World War, and one of the largest groups were South Asians of the British Indian Army. Some 1.5 million soldiers and non-combatants from the subcontinent served alongside the British on the Western Front in Northern France and Belgium, the Middle East, East Africa and Gallipoli. For the first time Indian Army contingents were deployed in a European war, and this marked an important watershed. Wounded soldiers were cared for in special hospitals on Britain’s southern coast, including the Brighton Royal Pavilion, built in an oriental style for George IV. The War Office went to great lengths to ensure that the facilities on the front and in the hospitals respected their religious and caste sensibilities, though these concerns disguised some of the ingrained racism they experienced.

The Indian Army arrived in Europe initially with two infantry divisions to shore up the British Expeditionary Force which had been decimated in the first weeks of the war. Ill equipped for trench and increasingly mechanised warfare, some 7,700 Indian Army soldiers lost their lives on the Western Front alone. South Asians fought in many of the major battles of the First World War, including Ypres, Neuve Chapelle, Festubert and Loos. The Indian Army suffered some of its heaviest casualties at Neuve Chapelle – some 4,700 men – and the war memorial to Indian soldiers is located in this Northern French town. 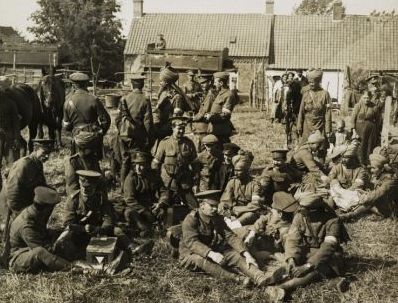 English and Indian soldiers of the Signal Troop of the Lucknow Cavalry Brigade relaxing in a farmyard at Brigade Headquarters, 28 July 1915, Photo 24/(158)

Translated excerpts of the censored mails in the India Office Records, housed at the British Library, are an important account of South Asian soldiers’ involvement in the war and document their fears, concerns and harrowing experiences.  For example, Khan Muhammad, 40th Pathans, Brighton Hospital, writes to Niyaz Ali 74th Punjabis, Hong Kong (Urdu, 17/05/1915):
“And there is an expenditure, too great for words, in this country, of black and red pepper (i.e. Hindustani and British troops). You are wise and for the rest you will reply without fail to this letter. […] The black pepper which has come from India has all been used up, and to carry on with I will (i.e., they will) now send for more men, otherwise there would be very little red pepper remaining, because the black is hard and there is plenty of it. And the black pepper (here) is somewhat less than the red, and this water is not right without black pepper. Now you must understand, and what you can see with the eye, is written; you must multiply it all by 45.”

Aware of censorship, a soldier would often use coded or euphemistic language. Here he conveys his shock at the large number of casualties, which led him (and many others) to believe that they were used as ‘cannon fodder’. 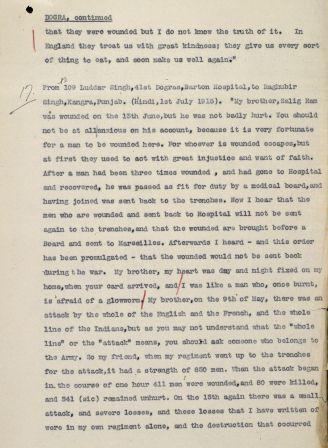 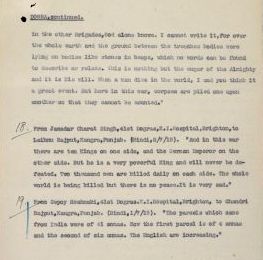 At the end of 1915 the majority of Indian contingents were redeployed to the Middle East, but two Indian cavalry divisions remained and would participate in the Battle of the Somme. South Asian soldiers won many awards for bravery, a total of 12,908, including eleven Victoria Crosses.

To read the censored mails, visit the Asian and African Studies reading room at the British Library and look at the India Office Records, IOR/L/MIL/5/825-828.

Dr Florian Stadtler is a research fellow at The Open University, and has been working in partnership with the British Library on the OU-led AHRC-funded projects ‘Making Britain: South Asian Visions of Home and Abroad’ and ‘Beyond the Frame: Indian British Connections’.

Kieron - High resolution images of First World War India Office Records are now available from the Europeana website - I have added the link to the blog post. If you would like an easier-to-read copy of the images used in the blog, please contact me via [email protected]

Very interesting ... but the scans of the letters are too low-resolution to read (even if you open the images separately, they are too low quality). Shame as, from what I can see with squinting eyes, they look fascinating.