You may be surprised to learn that the East India Company provided free medical advice and treatment to its London warehouse labourers in the early 19th century. Having carefully screened men for physical defects on admission, the Company then sought to maintain their health by giving them access to a doctor as soon as they felt unwell. If the illness was not serious the labourer continued at work, perhaps given light duties.  Men with more serious ailments stayed at home and were paid sickness benefit of 1s 6d per day including Sundays.   Payment was withheld if the problem was caused by drunkenness, venereal disease, ‘fighting any pitched Battle, or by Reason of any Hurt or Injury occasioned by Idleness or voluntary Contests’.  One of the Company surgeons visited the sick labourers at home and men could not return to work without his permission. Men might be granted leave of absence to go to the country for a change of air or to seek treatment at places such as the Sea Bathing Hospital in Margate.

Consumption, pulmonary complaints and fever were common amongst the labourers. Whenever flu or cholera was prevalent in London, 40 or 50 men every day attended the Company clinic with coughs and bowel complaints. Before the water-borne transmission of cholera was identified, the Central Board of Health issued advice like this from 1832: 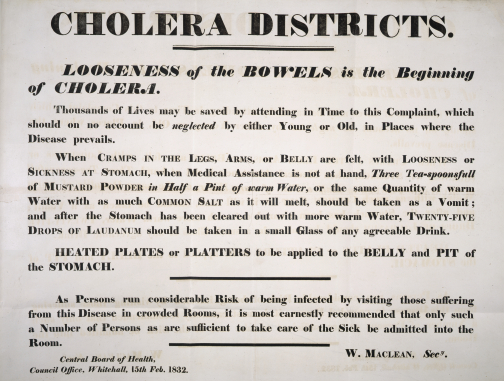 Two of the self-help remedies here expressly recommend drinking water, either with mustard powder or salt. With hindsight, we can see that this had the unhappy consequence of encouraging further exposure to a primary source of infection.

During the cholera epidemic in the summer of 1849 The London Daily News published an advert for Fenning's Cholera Mixture. A family size bottle cost £1 1s, more than a labourer earned in a week. The advert claimed:
‘All have been saved who have taken it.  A dose taken twice a week will prevent any attack.  Every family should keep it in the house, in the bedrooms, ready for immediate use, as the Cholera mostly attacks at midnight’.

The cholera epidemic in the summer of 1849 claimed the lives of several people connected with the East India Company in London. Warehouse pensioners and their families died in areas as far apart as Wapping and King’s Cross. Labourer Dennis Crane was struck down by cholera whilst at work in the Military Store warehouse in Leadenhall Street in August 1849. Medical help was summoned, and Crane was taken to hospital in a cab but unfortunately he soon died. The speed with which death followed the onset of cholera symptoms was frightening.

The East India Company selected well-qualified surgeons to deliver comprehensive medical treatment to the labourers.  But the Company was powerless to protect its London employees against the ravages of cholera in an era when transmission of the disease was not fully understood.

If you are interested in knowing more about the East India Company warehouse labourers, please contact Margaret Makepeace at the BL.

Posted by Margaret.Makepeace at 00:15:00 in Domestic life , Health , Science and environment , Work