Policing the crowds in Aberystwyth

The royal visit of the Prince and Princess of Wales to Aberystwyth on Friday 26 June 1896 was received with levels of public enthusiasm rarely seen today. Crowds poured into the town from across mid-Wales – a local public holiday had been declared - to see Prince Albert Edward (later King Edward VII) and Princess Alexandra arrive by rail and progress through the streets in the royal carriage. The primary purpose of the visit was the installation of the prince as chancellor of the University of Wales, but Princess Alexandra also formally opened the glass pavilion on the new pier. Security was tight: a Royal Navy ship of war was expected to be stationed out in Cardigan Bay. 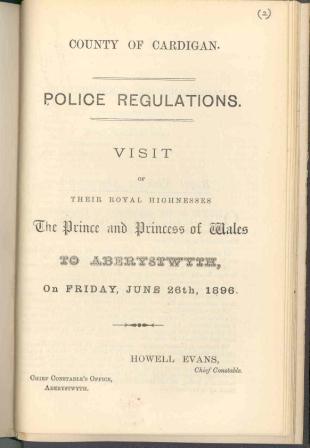 All the streets mentioned in the pamphlet are still the same today, and the route of the royal procession can easily be mapped on a modern-day street plan, emphasising how much running about the foot police, fire brigade and others had to do in order to realise Mr Evans’s instructions. Many of the landmarks are also still there, although a few have been lost in the intervening years , such as the 1870 Town Hall – which the Town Council spent £400 decorating for the royal visit – but which burnt down in 1957.

In addition to local Cardiganshire men (mostly foot police and volunteer fire fighters), police officers were drafted in from outside the county: 82 were brought in from Glamorganshire, 42 from Carmarthenshire, and 21 from the Borough of Swansea, together with English detectives from London (2), Liverpool (2), Birmingham (1), and Manchester (1). 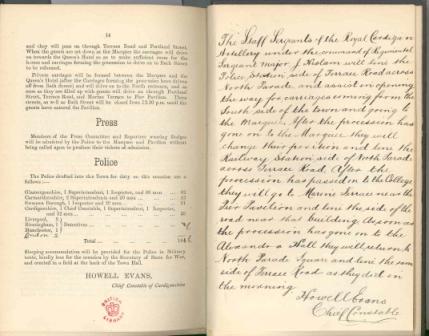 The final blank leaf of the pamphlet has in this copy been filled with handwritten notes signed by Howell Evans. They record the day’s instructions for the volunteer Royal Cardigan[-shire] Artillery, under the command of Regimental Sergeant-Major J. Heslam. One wonders whether their involvement had been agreed after the pamphlet had been sent to the printers?

Subsequent press reports of the royal visit record that the day went exceedingly well, but fail to mention the policing: no doubt an indication of the success of Howell Evans’s meticulous planning.