Despite knitwear being cheap thanks to computerised weaving and cheap overseas labour, the knitter’s art is reviving.  I recently started inventorying the British Library’s collections of vintage knitting guides and the 1930s seemed a good period to start. 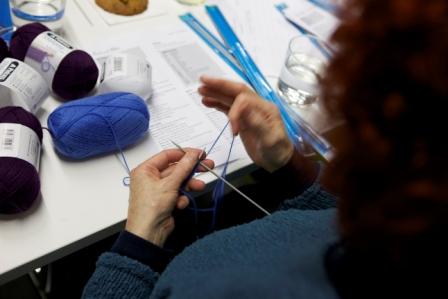 Stitchcraft, the monthly fashion knits magazine, was bought out by Patons & Baldwins in 1932 and continued for another fifty years.   Two collections of P&B’s patterns, issued under the Stitchcraft banner in 1937 and 1939 and 1948-1953, give a good sampling of vintage designs. The firm produced a wide range of patterns, mainly directed to middle class women who had the leisure time for knitting unusual wear.

From crêpe and Angora collars to raglan, ruffled, or flared sleeves, there were a lot of ideas back then that, deservedly or not, have been ignored since.  Unlike today, patterns are offered for “the larger figure” and “the older woman”, with stitch-styles such as Fair Isle, arrowhead, fir-cone, bobbles, zig-zags, pin-checked, mock cable, ladder-stitch, moss-stitch, pinwheel, and beehive.

Cardigans, jumpers, hats and gloves, twin-sets - you’d expect those.  But a knitted ‘shower-proof golf coat’?   The adventuresome and skilled could make a floor-length luxury dressing gown with silk lining and with any luck they wouldn’t have dribbled cigarette ashes on it.  Some things may have seemed lovely ideas but would the maintenance of knitted panties and cami-knickers really be worth the effort of constructing them in the first place?

Mills that supplied yarns tended to merge through the years, and so, the union of Lister with Lee Target, later known as Lister-Lee, resulted in numerous published patterns. From the mid-1960s they offered a series of Mary Quant designs, another with the ‘Op-Art Look’ in black-and-white, faux-military sweaters for children, a  ‘Party Girl’ series, knitted NASA space suits for techno kids of 1969, funky ‘hot pants’ in 1971, and designs for the Royal Wedding of 1981.

The Lister folks in Bradford shrewdly got celebrities to pose for their colourful front covers.  These included jazz singer Ottilie Patterson and her then-husband and bandleader Chris Barber modelling knitted, collarless ‘Trad Jackets’ in 1963, perhaps taking their cue from the Beatles’ brief embracing of that style.   Other posing personalities were TV star Amanda Barrie, British Middleweight Champion Johnny Pritchet, recording artists Russ Conway, The Caravelles, and The Viscounts, and Barbara Windsor and Jack Douglas in a series of ‘Carry-On-Knitting’ booklets.

Their 1970s and 1980s patterns reflect pop cultures of hippie, disco, and new romantic aesthetics, although they had the good sense not to try to tempt punk-rockers to take up no. 8 needles.

Posted by Margaret.Makepeace at 00:15:00 in Arts and crafts , Domestic life