James Cunningham was a Scottish surgeon active in China and South East Asia, c.1698-1705. He is best remembered for dispatching over 600 Chinese botanical specimens to Britain while employed as a surgeon by the English East India Company for their settlement at Zhou Shan.

In 1703, the settlement moved to the Cochin-Chinese island of Pulo Condore after being expelled from Zhou Shan. On 15 March 1705 the Makassar soldiers hired to protect the trading settlement set fire to it and shot dead 16 men who were trying to put out the flames. The survivors turned to the local Cochin-Chinese authorities for help, but shortly after capturing and executing the Makassars they also turned against the English, initiating a second bout of bloodshed.  Only Cunningham and a few others survived. 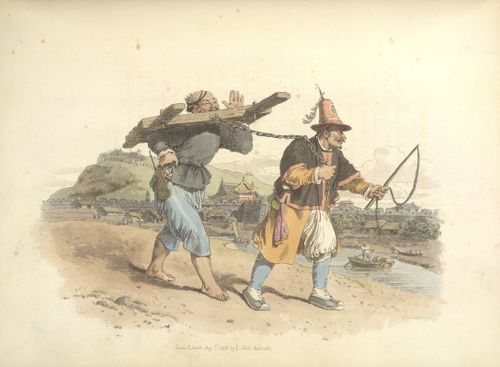 In a little known letter to Baldwin and Wingate at Cambodia dated 4 May 1705, Cunningham provides a personal account of his treatment and trial at Barrea in Cochin-China following these traumatic events. Although injured, Cunningham was one of the lucky few being led away to Barrea by the Cochin-Chinese in a cangue like a criminal.

Appearing before the Cochin-Chinese officials on 29 April 1705, he was made to answer three charges levelled against the English. First that the settlement at Pulo Condore was established against the wishes of the King of Cochin-China; second that they failed to present the King with adequate tribute; and finally that they had been in secret communications with the Cambodians against whom the Cochin-Chinese were at war. Cunningham replied that an embassy was sent to the King of Cochin-China seeking permission for the settlement and that a mission to deliver tribute to the Royal Court was aborted because of  widespread illness within the settlement. To the third charge he pleaded that the settlement was unaware of the need to report their communications with Cambodia to the Cochin-Chinese authorities. Cunningham’s defence failed to impress his captors and he remained in close confinement at Barrea for two years with just two quan a month for subsistence.

Following his release Cunningham’s misfortunes continued. He narrowly escaped yet another massacre at Banjarmassin in Borneo and eventually died on a voyage from Bengal to England c.1709.

Posted by Margaret.Makepeace at 08:00:00 in Conflict , Journeys , Science and environment

The letter is not available online. You are most welcome to visit the British Library to view the document or you could purchase a copy. Please see our website for details of reader registration or Imaging Services.

I am interested at this post, and would like to read the content of the ducument cided as IOR/E/3/68 OC 8358: Letter from James Cunningham at Barrea to Messrs Baldwin and Wingate, 4 May 1704.
can you help me to get the link to this document?
de tran

Posted by Margaret.Makepeace at 8:00 AM