One hundred years ago, suffragette Emily Wilding Davison went onto Epsom race course during the Derby and was struck by the King's horse Anmer. Emily suffered a fractured skull and she died four days later. As part of the centenary commemorations, Untold Lives will be posting a number of stories related to Emily and the campaigns for women's rights. We start today with a story by guest blogger Penelope Tuson about Lord Curzon's opposition to women's suffrage.


Lord George Curzon was Viceroy of India from 1898 to 1905 and a fervent champion
of British imperial interests. He was also hostile to the idea of women's suffrage which he believed might 'lead to the disruption and even to the ruin of the Empire'. 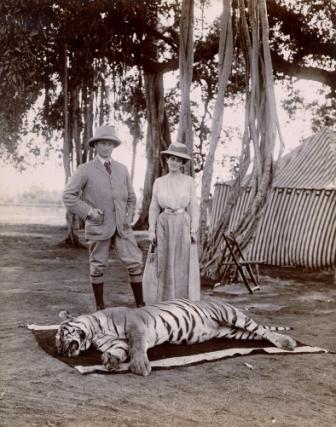 In 1910, together with the Earl of Cromer, former British Consul-General in Egypt, Curzon published an Appeal in The Times on behalf of the ‘Men’s Committee for Opposing Female Suffrage’, asking for political support and money. Curzon's personal papers include several volumes of letters responding to his Appeal which shed a fascinating light on the range of views and depth of feeling within the suffrage debate at the time.

Many of the responses from Establishment figures were predictably supportive, although occasionally half-hearted. Lord Lambton sent a cheque for £500, adding that the 'male portion of the Lambton family' could be relied on 'to give very candid opinions about women'; Viscount Astor promised 'full sympathy' but thought the socialist movement was 'a more imminent danger'; Arthur Sassoon replied that he had no decided opinion but added that his wife would not allow him to subscribe.

The responses from suffragettes and their sympathizers were more closely argued and more heartfelt. Maud Arncliffe Sennett was the daughter of an Italian immigrant and the employer of over a hundred workers in the family confectionary firm, G.Sparagnapane & Company. She thought the anti-suffrage movement was based on class-prejudice and she spoke out loyally about the vulnerability of women workers who were unprotected, either by hereditary wealth and position or by the democratic power of the Vote.

An anonymous male writer from the Baltic Shipping Exchange was the most outraged. ‘Surrounded as you are by despicable flatterers’, he wrote, ‘I am afraid it is very seldom indeed that you hear the truth, but I would just tell you that in connection with the women’s movement, more men than you perhaps guess have nothing but pity left for the rubbish you talk! ...one wonders how you ever managed to be Viceroy of India. What you say is absolutely childish...you ought to have been born a hundred years ago when people believed in the divine right of Kings – that is all gone – so is the divine right of men to overlord women! ... I have always considered you a conceited man – but up till recently I did not know that you were also cracked.’

At the end of the First World War Curzon admitted defeat. He went through his ‘sad correspondence’ on the anti-suffrage campaign and decided that there was no point in keeping it since it would never interest any one and ‘the cause had been lost.’ Fortunately for the history of the Women’s Suffrage movement, much of this correspondence is still available for research and enjoyment, in the British Library.

Posted by Margaret.Makepeace at 08:15:00 in Conflict , Politics , Propaganda , Reform