To whet our readers’ appetite for stories related to the commemoration of World War I over the next year or so, here are snippets of an 'untold life' pieced together from two sources in the India Office Records.

Joseph Alexander Faithful was a young Anglo-Indian who set out from Calcutta in the spring of 1914 to travel to Europe with the goal of training as a mechanical engineer. Working his passage as a deck hand on the S.S. Nordmark, he had no way of knowing that power politics were conspiring against him, and when he reached Hamburg in late July he was interned. This seems more than a little harsh, as he was then aged only sixteen and war between Britain and Germany was not formally declared until 4 August. Three long years later he was moved to Havelburg POW camp, but he had to endure two punishing stints working in the Steinforde salt mine near Hanover before the British Red Cross was able to arrange his transfer to England in May 1919, a full six months after the Armistice.

However Joseph’s problems were not about to end. Drifting from one youth hostel to another, and with little or no contact with his family back in Calcutta, he eventually found accommodation in Stockwell Park Road, S.W.9, from where he sent plaintive appeals to the India Office asking for money to buy clothes to see him through the European winter, and to secure a place on a course in telegraphy (his experiences in the salt mine perhaps having put him off a career in engineering). Hanging over him all the while was the fear that some of the Indian nationals who had been imprisoned alongside him in Germany would smear him as someone who had worked a little too enthusiastically for his captors.  The file includes correspondence with the British Military Mission in Berlin and the Committee of Enquiry into Breaches of the Law of War as the mandarins in Whitehall attempted to confirm that he had been more sinned against than sinning. Joseph’s plight attracted a degree of sympathy and more than once a civil servant refers to him as "the lad" when arguing the merits of his case with his bureaucratic seniors. 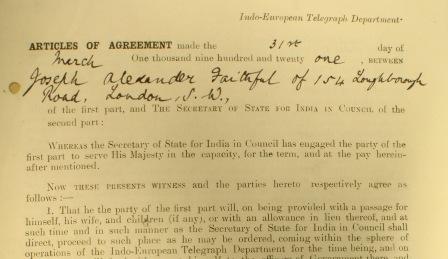 There is a happy ending to the story.  In 1921, Joseph Faithful signed articles of agreement for a post as a general service clerk in the Indo-European Telegraph Department at a salary of 300 rupees per month; furthermore, that staple of biographical information the ecclesiastical returns series shows that he later married in Karachi in June 1934. As Britain, India and Germany all began to come to terms from their different national perspectives with the aftermath of the War, and as the world reeled from the influenza epidemic that was to kill more people than the fighting itself, it is salutary to be reminded that history and archival sources encompass the fate of the ordinary as well as the great.

Further reading:
Joseph’s story is taken from these files in the India Office Records -