Diamonds at the Court of the Shah

In 1810 Sir John Malcolm undertook a diplomatic mission to Persia with the aim of consolidating Britain’s position in the region.  A letter from the Civil Auditor’s Office at Fort William in Bengal to William Bruce, Resident at Bushire, includes a list of presents given to the Persian Shah by Malcolm on his departure.  Malcolm thanked his host for the favour shown to him with a variety of gifts: cattle, pistols, a telescope, a ‘Copernican System of Astronomy’, swords, as well as luxury goods including opera glasses, various cloths in satin and muslin, shawls, and diamonds. The ‘List of Diamond Jewelry’ still looks enchanting after 200 years.  Diamonds feature in rings with pearls, enamel, emeralds and in other objects, like a ‘Rose Diamond Girdle clap’ [sic] worth 638 Rupees.  But the best piece of the collection is the last on the list, a ‘diamond valued 11.000 Rupees’. 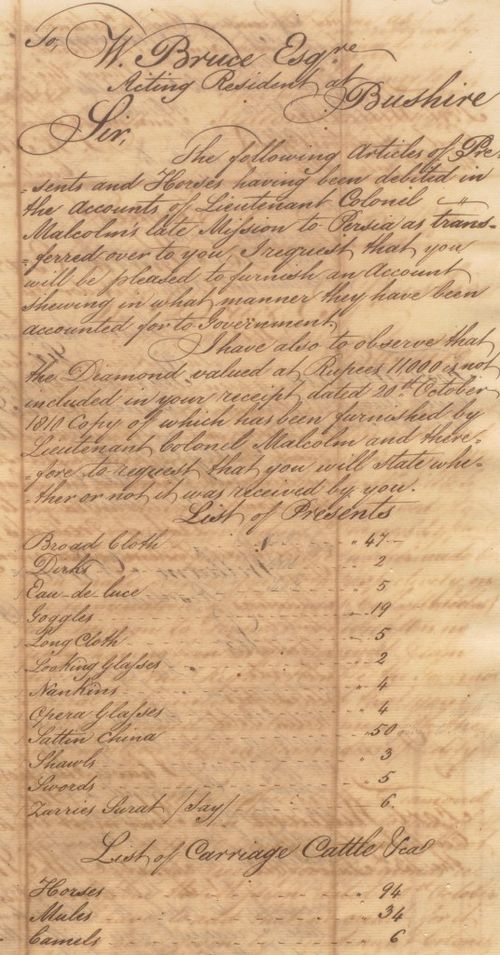 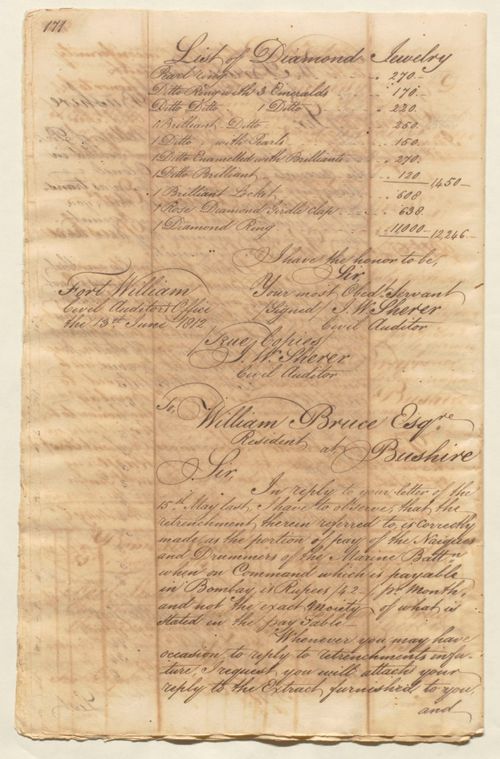 What would be the price of this diamond nowadays?  According to the same list of presents, a gold watch was worth 1 Rupee, and a pair of spectacles 5 Rupees.  Assuming that the exchange rate at that time was 8 Rupees for £1 Sterling, this source suggests that nowadays the approximate values would be £170 for the gold watch, £533 for the spectacles, and an enormous £1.2 million for the diamond.

Fat′h Ali Shah was certainly a great connoisseur and collector of gems and Sir John Malcolm must have been aware of this when he brought expensive gifts for him and his ministers.  He commented that this ‘extravagance of the public money’ would cause him problems with the East India Company.

However even this lavishness was not enough to please the Persian Court.  Malcolm’s diary records: ‘I made the Prince a present of about 14.000 rupees, of which a diamond valued between 10.000 and 11.000 made part.  The royal jeweller, angry at not being consulted, undervalued the stone, swearing, I understand, it was not worth more than two or three thousand’.  Malcolm had to withdraw the gift and donate the money he received from selling it, and concluded that the Prince was as ‘rapacious as his brethren, and as insensible to shame’.

According to his later memoirs Sketches of Persia, Sir John Malcolm was given the privilege of inspecting the Shah‘s richest jewels ‘amongst which was the "Sea of Light," which is deemed one of the purest and most valuable diamonds in the world.  Many of the others are surprisingly splendid.  The "Darya-i-Nur" or "Sea of Light" weighs 186 carats, and is considered to be the diamond of the finest lustre in the world.  The "Taj-e-Mah" or "Crown of the Moon", is also a splendid diamond.  It weighs 146 carats.  These two are the principal diamonds in a pair of bracelets, valued at nearly a million sterling. Those in the crown are also of extraordinary size and value’.

We just don’t know what happened to the diamonds; but, as I write, other correspondence volumes from the British Residency at Bushire in the period are being catalogued and digitised, so there is a possibility that new discoveries will be made.

The main issue encountered in writing this piece is to understand the historical value of goods.  Please let us have your comments and thoughts on the subject.

Posted by Margaret.Makepeace at 08:15:00 in Arts and crafts , Journeys , Money , Politics , Qatar

Thanks for the suggestion, Malini. The portrait shows really well how much he liked his jewelry!

I enjoyed reading your blog post on Fath ‘Ali Shah and thought you might be interested to learn that the British Library has two portraits of the ruler:
http://www.bbc.co.uk/arts/yourpaintings/paintings/fath-ali-shah-king-of-persia-17971834-191067

One is currently on display in the Asia and Africa Reading Room. The other is in storage.