Lip salve and worms in the face

Take 2 ounces of fresh butter before it has any salt put into it 2 ounces of Virgins wax a quarter of an ounce of Alkanet root [a pigment] & a lettle juce of white Grapes, put all these together, over the fire, & when it is melted it is enough.

Lip salves were being concocted hundreds of years before Katy Perry sang about Cherry Chapstick.  There are several recipes from 1772 in Pierre-Joseph Buc'hoz’s  The Toilet of Flora, ‘a very perfect Collection of the Methods which tend to improve Beauty, to repair the Wastes of Languor and Fatigue, and to avert the Marks of Decline and Age’.  Some of the lip salve ingredients are as innocuous as those used by Miss Addams: oil of sweet almonds; oil of rhodium; oil of eggs; the stones of half a bunch of ripe black grapes; orange flower water; beeswax. Others are less appealing to modern tastes, for example the ‘hogs-lard’ kneaded together with red and damask roses in a recipe for a scarlet lip salve.  Fresh mutton suet, goose grease, veal marrow, and deer or goat suet are combined with almond or flower oil. 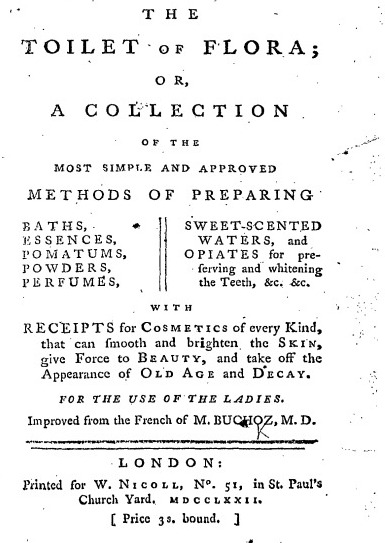 ‘A Crust of Bread applied hot, is an efficacious remedy for pimples that rise on the lips, in consequence of having drank out of a glass after an uncleanly person.’

‘Powder your head with powdered Parsley Seed, three nights every year, and the hair will never fall off.’

And who could resist experimenting with these?

‘An excellent Preservative Balsam against the Plague’

‘A Water to change the Eyebrows black’

‘An approved Receipt against that troublesome Complaint, called the Teeth set on Edge’

And last but not least –
A water mixture ‘To remove Worms in the Face’.

Pierre-Joseph Buc'hoz, The toilet of Flora; or, a collection of the most simple and approved methods of preparing baths, essences, pomatums, powders, perfumes ... (London, 1772)
A digital copy is available on Eighteenth Century Collections Online.

Posted by Margaret.Makepeace at 08:15:00 in Domestic life , Health , Science and environment